Even though he didn't throw for 100 yards, Jeff Driskel tossed a career high four touchdown passes to lead the Florida Gators in their 44-11 rout over the South Carolina Gamecocks.

I'll be the first to admit that Florida's 44-11 win over South Carolina wasn't pretty.

But then again, was it Jeff Driskel's fault that the Florida Gators first three scoring drives started on the South Carolina 2-, 29- and 1-yard lines? Not at all. For the first time all season long, the Driskel and the Gators were able to capitalize on down-and-goal situations.

At the end of the day though, the final score is all that matters. It's all that has ever mattered. And I'm sure you know why, but just in case you do not, you will as of now.

It was during a regatta in 1851 and fourteen British cutlers were racing around the Isle of Wight against one American schooner. That lone American entrant was perhaps unimaginably named, America. The story goes a little like this:

As Queen Victoria watched from the finish line, she asked a signalmaster: "Are the yachts in sight?"

"Only the America, may it please your majesty."

"Ah, your majesty, there is no second."

Truer words have never been spoken. "There is no second." Second place doesn't matter. The Gators, unlike those conquered Seminoles up there in Tallahassee, haven't felt what second place feels like this season. Nor do they plan on feeling it any time in near future.

But back to Driskel. Driskel accounted for a grand total of 88 yards of offense. That's a far cry from what he did last week against Vanderbilt, when he accounted for more yards on the ground than the great Tim Tebow. But Driskel took advantage of the opportunities presented to him by throwing for four touchdowns, and played a clean game despite significant pressure.

Heck, he even threw the ball away when he needed to. That right there is so noteworthy that it could practically be an entire article! Ladies and gentlemen, progress. Get out of his freaking way. 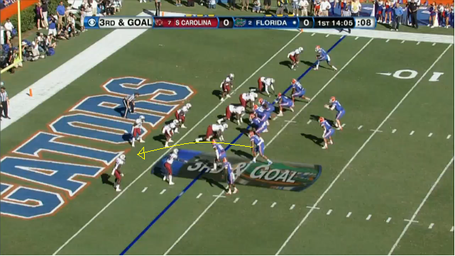 On this play, which is still within the first minute of the game, Jordan Reed is going to run a quick out-route to about a yard or two inside the end zone from the trips formation. It's a good route and play call because the other receivers are going to command attention and/or screen the defenders. And don't worry, it's not illegal... per se. 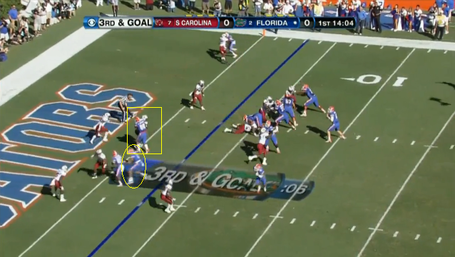 Reed (yellow circle) is still in his route, while Clay Burton (yellow square) has run his portion of the route. Burton does a good job of getting into the defenders way, which in turn clears some space for Reed to stop and turn around to look for the ball. 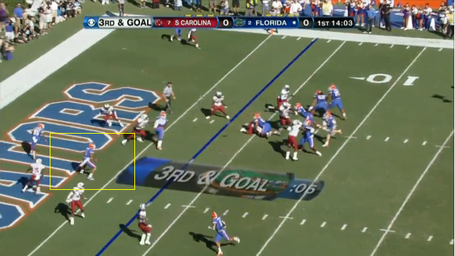 As Driskel releases the ball, look at the amount of space that Reed has. That is way too much for a defense to give up this close to the goal line on an obvious passing play. But hey, the Gators were able to take advantage of it. 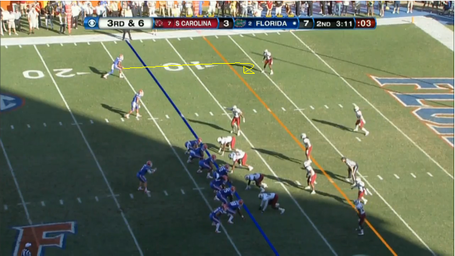 On this play, Dunbar is just going to run about a 10 yard stop route. 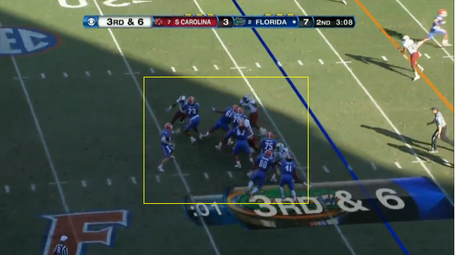 Look at the pocket that Driskel has as he is about to make the throw. It seems like this was one of the few times that the offensive held their own. 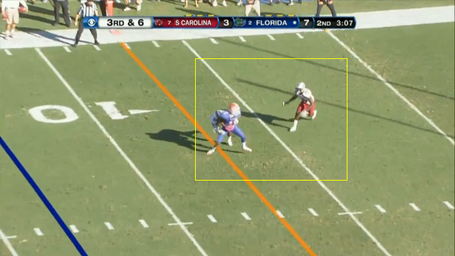 As Dunbar makes the catch for the first down, we're prepared to think that is all he is going to get. 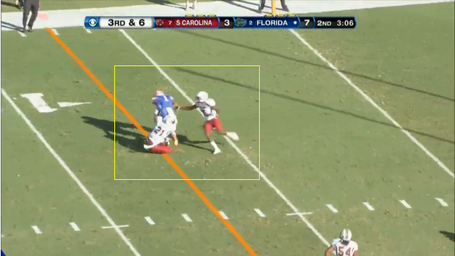 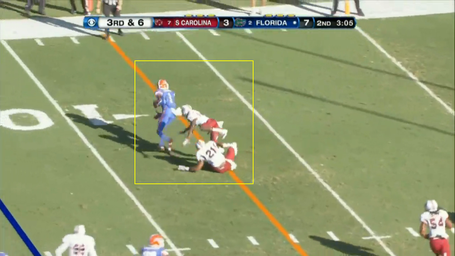 After getting spun around by the defender, Dunbar breaks loose and has an easy 8 yard trot into the end zone for the touchdown. It was just a wonderful combination of refusing to go down on Dunbar's part and horrible tackling by the Carolina defense. 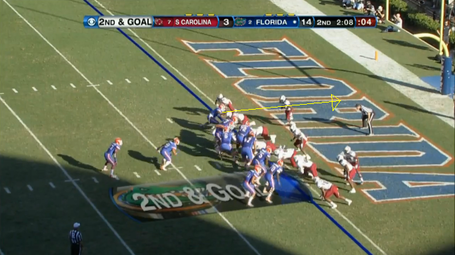 Another goal-to-go situation. The Gators, up to this game, had struggled mightily in these situations. Maybe offensive coordinator Brent Pease and company have finally figured it out. 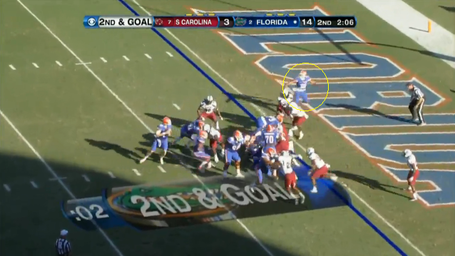 As the play action draws the defenders in, you can see Reed sneaking behind the defense. 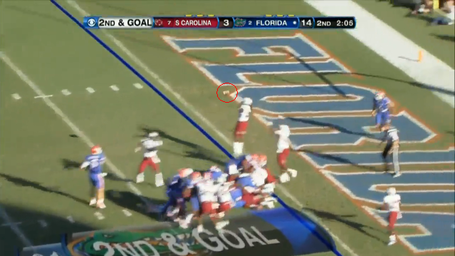 Driskel puts just enough air and touch on the throw to get the ball (red circle) over the defenders and into the hands of Reed for the touchdown. At this point, the game was over. Touchdown, Gators.

As mentioned above, it sure wasn't pretty from a yardage standpoint. But hey, that's not what matters. We know this, and now we know why.

The Gators are 7-0 and one of the major differences between this year and last year is the turnover margin. We'll get into that more on Monday and Tuesday, but for now, just enjoy the fact that the Gators are taking full advantage of the opportunities that are presented to them.

Because that's what great teams do.