To supplement a terrible defense, the Georgia Bulldogs use a rather overall balanced offense. They can score points, but the Florida Gators defense can shut them down.

Share All sharing options for: Florida vs. Georgia, Theater of Operations: Previewing Aaron Murray and the Bulldogs' passing game

Could their defense step up and shut down an opposing team? Sure. But that's unlikely, given that the only teams Georgia's shut down this year are Missouri and Vanderbilt.

Heck, I'm pretty sure that my uncle, the Vietnam vet with knees so bad that watching him stand up is painful to me, could run rampant through the Bulldog defense.

But that's not why we're here. We here to look at the Bulldog offense, which is on the exact opposite spectrum. Their scoring offense ranks 17th nationally at 39.6 points per game. That's nearly 40 spots higher than the Gators who currently sit at 54th in the country with 30.1 points per game.

The Bulldogs are also 30th in both passing and rushing offense respectively, and have the 18th overall offense in terms of total yardage at 486.9 yards per game. Where are they getting this production from?

It's actually pretty obvious, so I'm glad you asked.

Aaron Murray has passed for nearly 2,000 yards on almost 200 attempts for sixteen touchdowns and four interceptions. The running back tandem of Todd Gurley and Keith Marshall has combined to rush for over 1,000 yards (622 yards for Gurley and 488 yards for Marshall) and 14 touchdowns (9 for Gurley, 5 for Marshall). They both average right around seven yards per carry.

On the receiving end of things, it's Tavarres King and nobody else. King currently sits at 26 receptions, 511 yards and five touchdowns. Their receiving corps did take a hit when Murray's favorite target, Michael Bennett, when down with a season ending ACL injury. 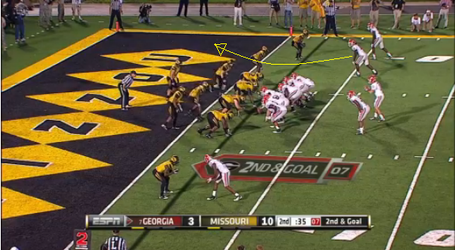 This is what separates Murray from a lot of quarterbacks in the college football. When he is "on," he can pretty much place the ball wherever he wants. 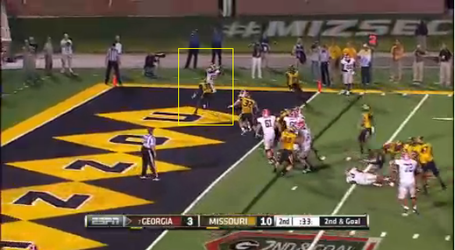 Murray sees the one-on-one coverage, and within two seconds has already thrown the ball for a touchdown. Notice the location of the ball, it's to the outside shoulder of Brown (yellow square) so that he is the only one who can make a play on the ball. 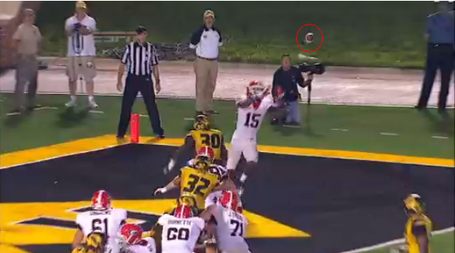 Play No. 2: Murray's seven-yard touchdown pass to King against Missouri 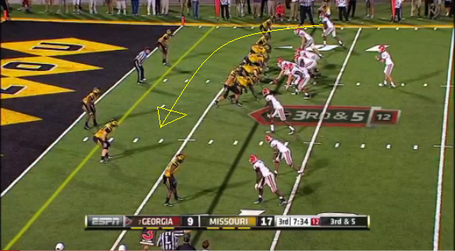 King is going to run a short crossing route over the middle of the field. This creates a matchup problem for the defense, as now the Tigers have to put a safety on King in zone coverage. Given how close to the end zone this play takes place, if King makes him miss, he's in for the touchdown.

The angle taken by the safety helps with that. 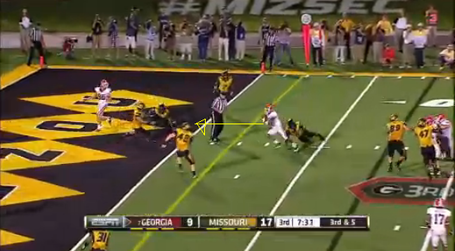 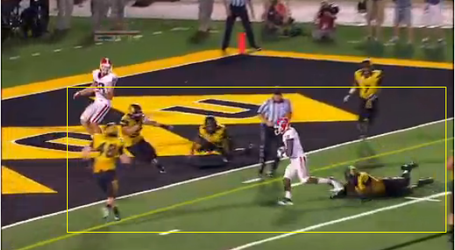 King will end up just sliding into the end zone for a touchdown, and a rather easy one for a team that was said to play old man football.

Play No. 3: Murray's 66-yard touchdown pass to King against Kentucky 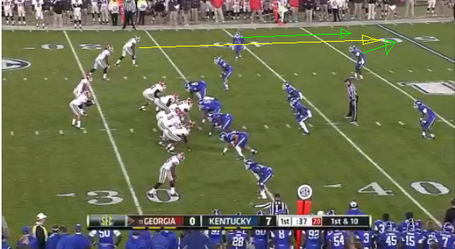 On this play, King is just going to run an Andre Debose route. He'll be in double coverage, but Murray is going to do something to solve that issue. 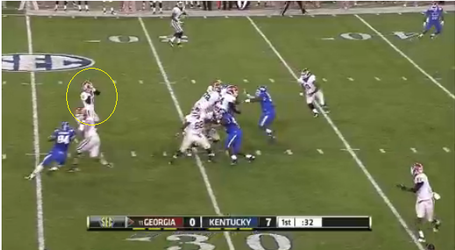 Murray pump-fakes, which causes both defenders to pause for just enough time to allow King to get behind them. 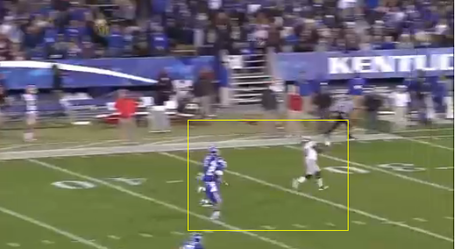 Wide open for the touchdown.

The Gators should be on upset alert tomorrow, but then again, hasn't everyone already said that about the Gators at least three different times this season?

I expect the Gators' improved secondary to slow down Murray and company. But that doesn't mean they shouldn't respect the Bulldogs rushing attack, even though that's not what has beaten the Gators in this rivalry, for the most part.