The Florida Gators struggled in nearly all facets against the Georgia Bulldogs. The offensive line was probably the worst collective unit of the bunch.

I apologize for the missing Theater of Operations post on Sunday. As I said in the GameThread, I was out of town at a wedding, so that it rather difficult to stay tuned. We're going to run Theater on Monday, Tuesday, and Wednesday this week.

I'm trying to not get mad about Florida's loss to Georgia. But there are just so many things to be mad about, so many people to be mad at. There's the officials, the play-calling, the missed tackling (which we'll cover later) ... heck, I'm sure that somewhere deep down inside, at places that I don't like to talk about at parties, I could be mad at Jordan Reed. But I'm not.

I'm generally not a mad person, especially when it comes to Florida Gators football — because, let's be honest, the Gators always lose at least one game a year — but if I had to pick one thing to be mad at, it would be the offensive line.

The Florida offensive line was horrible against the Georgia Bulldogs. And I'm pretty sure I'm being nice in saying "horrible." They were atrocious. They were pathetic. They were pitiful.

I'll admit it: I'm mad at the offensive line. I swear I wasn't trying to be, but I guess I fully blame them as a group — and not the officials, the play-calling, or Reed — for the loss to Georgia.

The offensive line was soft last year, and, on Saturday, they played like they did last year, not how they played against LSU, South Carolina or Texas A&M. It was disappointing.

Screw it, let's just go to the video.

Play No. 1: Jeff Driskel is sacked by Damian Swann, fumbles 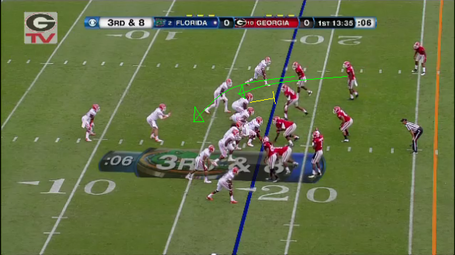 We talked a lot about this in the GameThread, and I'm in agreement with the thought that results like this are on the shoulders of the offensive line and quarterback. As an offensive line, you've got to make adjustments. As the quarterback, it's your job (kind of) to call out those adjustments, if you can.

There are things to note here:

All three of those things are not good. 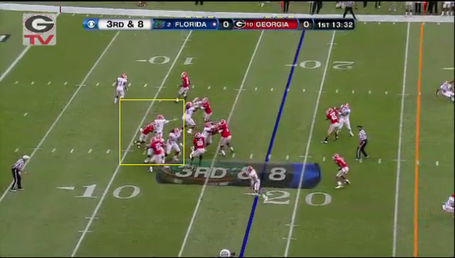 The result of the scenario laid out above: Driskel's arm is hit as he is throwing, which results in a fumble that was recovered by the Bulldogs' Jarvis Jones. Replays clearly showed that it was indeed a fumble, so there is no controversy on the play. 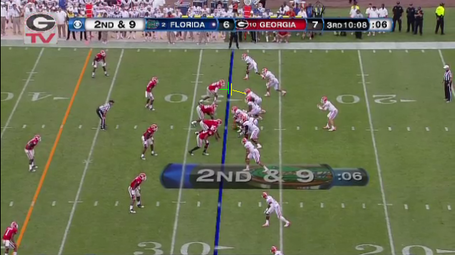 Florida's offensive tackles (Green and Xavier Nixon) struggled all game long against the Bulldogs. This play is a perfect example of their struggles. 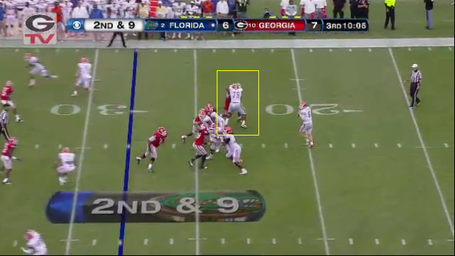 At first, it appears that Green is holding his own. 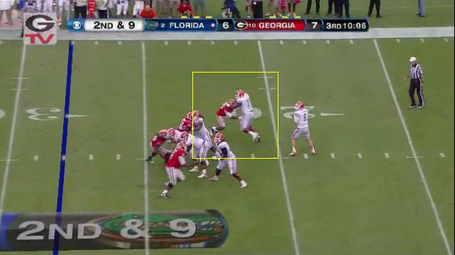 But as the play develops, you can see problems emerging. Green is on his heels (when his feet are actually on the ground) and he's just getting pushed back. 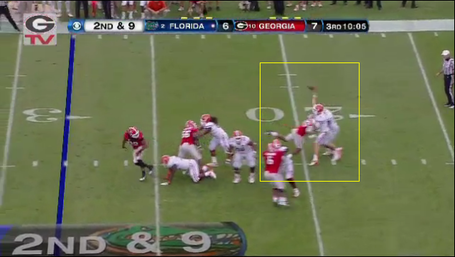 As soon as Driskel begins to throw the ball, the defender runs into him. I'm not exactly sure how much the defender was able to hit Driskel, but at the very least there was contact between the three (defender, Driskel and Green) of them. It affected Driskel's arm trajectory, which affected the ball's flight, which resulted in an interception.

Play No. 3: Driskel is sacked by Jones

*I couldn't really decide between this sack by Jones, or one of the other five that happened. This was just a better defensive play by the Bulldogs, so it won the tiebreaker. I guess. 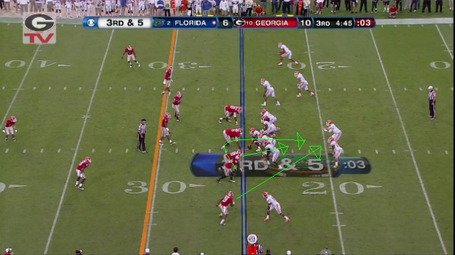 Jones is going to run a stunt and end up going uncontested through the middle of the offensive line. The cornerback is also blitzing, which will take up a blocker. 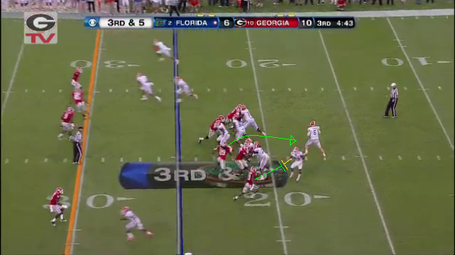 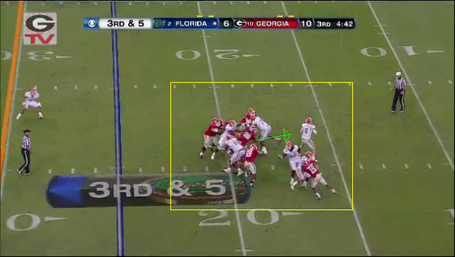 The confusion begins: "I DON'T KNOW WHO TO BLOCK." "NEITHER DO I!" 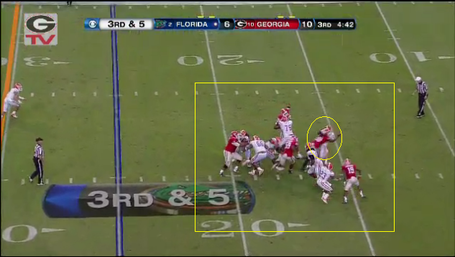 As Driskel is literally swallowed by Jones, you can see that Gillislee and Nixon (below the yellow circle) are confused and trying to figure out just what happened.

What happened was yet another piss-poor blocking job by the offensive line, and the result was a sack.

We'll get into the missed tackles on defense tomorrow, but if the offense line plays a little better maybe things would have turned out different. It's not like the Bulldogs have the greatest defensive linemen and linebackers in the country, either.

I'd have thought that Florida would have struggled like this against LSU and South Carolina. They didn't, saving their meltdown for the most important game of the year. But hey, that's why they play the games, right?