Florida vs. Georgia, Theater of Operations: Reviewing what went right against the Bulldogs

There wasn't much that went right for the Gators on Saturday against the Bulldogs, but with a little digging we were able to find some things.

Share All sharing options for: Florida vs. Georgia, Theater of Operations: Reviewing what went right against the Bulldogs

The third and final chapter of our delayed Theater of Operations posts. I guess blaming the bride and groom, but really the bride is a bit moot at this point. But hey, I just bought a new car yesterday... we're lucky this is getting finished as a result.

As we've discussed since roughly 7 p.m. on Saturday, not a lot went right for the Florida Gators against the Bulldogs during their match-up in Jacksonville. At the end of the day, though, I've always been more of a "glass half full" type of person.

Except for after the game against the Tennessee Volunteers in 2001. That was some bull. And yes, I fully the blame the scheduling change for us not winning the BCS National Championship that season. We would have won it, there isn't a doubt in my mind.

Oh, and after the Fiesta Bowl against Nebraska. Because we got manhandled, and I'm being nice. I remember watching the first three quarters of that game and just going to sleep. Sure, I was like 11, but the best Gators team under Spurrier got dominated by probably one of the top two or three college football teams of all-time, steroids or no steroids.

Back to the Georgia game: Not a lot went right. It happens. It wasn't supposed to happen, but it did. We'll move on.

The Gators will be all right. 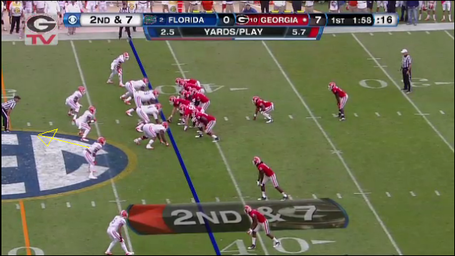 I've watched this play roughly 50 times (you can as well by clicking on the link below the photo), and I can't for the life of me figure out who this ball hits to deflect to Ball. I have no idea. 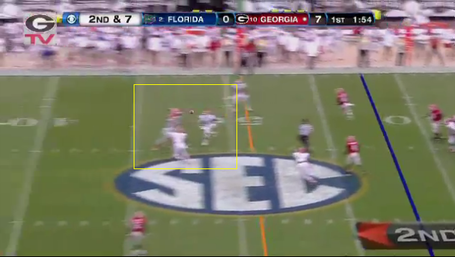 I know the photo is blurry, but it's the best the Georgia athletic site would do. Blame Georgia. As always.

Anyway, it's a bad throw by Aaron Murray because there are three Gators defenders within the immediate area. Throwing into triple coverage, unless you're Robert Griffin III, is a bad idea. (Ed.'s note: It is still a bad idea if you are RG3.) 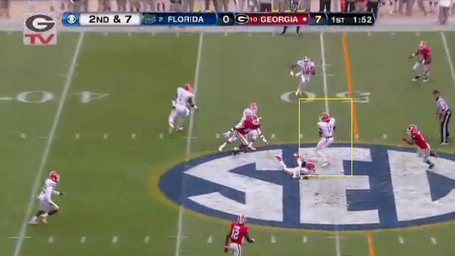 After deflecting off of someone, the ball finds its way into the hands of Ball. After running about 30 yards, he gets a five-yard return on his investment. It set the Gators up well ... for Jeff Driskel's inexplicable fumble.

Yet another "fun" interception by the Gators defense. Deflections! 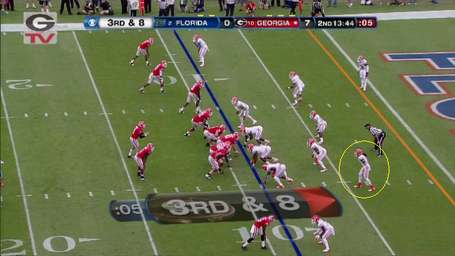 Evans is just going to drop back into zone coverage on this play and then react to what goes on in front of him. The Gators will end up getting pressure on Murray, but they get help because one of the receivers thought the play call was for a run to the left. 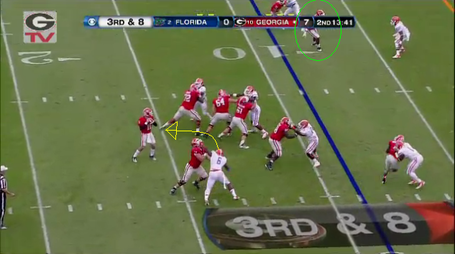 The receiver at the top (green circle) is the one who got mixed up on the play call and is "blocking" someone. Meanwhile, at the bottom of the screen, Dante Fowler Jr. is about to shed his blocking and get to Murray. 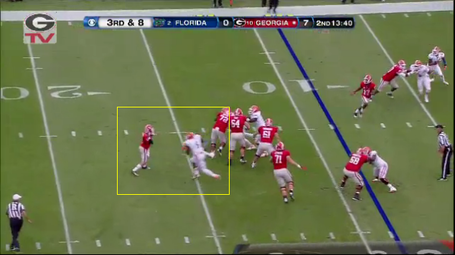 Fowler is a beast. It is his pressure that causes Murray to hurry his throw. 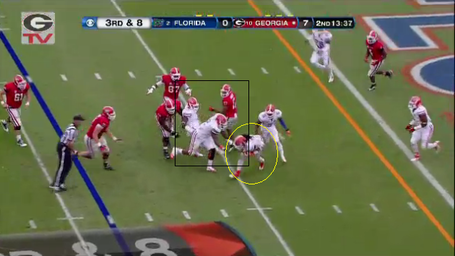 After deflecting off of three players (black circle), Evans is there to scoop up the ball and get a 4 yard return.

I know this play isn't the greatest, mostly because it is just a terrible throw. But it's well known around these parts that Elam is my favorite player. So, yeah, we're going to look at it. 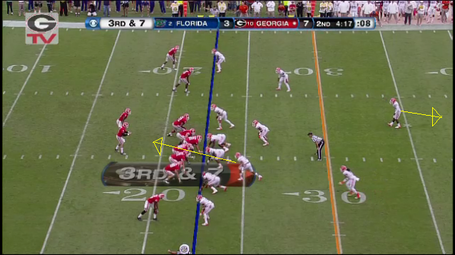 Jonathan Bostic is going to bring the pressure, while Elam just goes back into coverage. 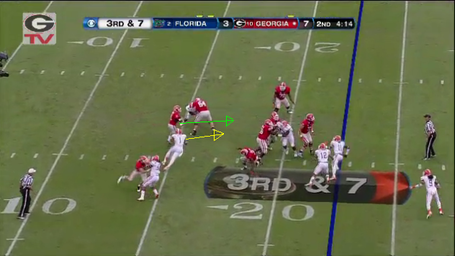 Bostic continues his chase of Murray. He'll fall short in his goal of actually getting to him, but his presence causes Murray to get off the throw without setting his feet. That will result in the throw being high, really high. 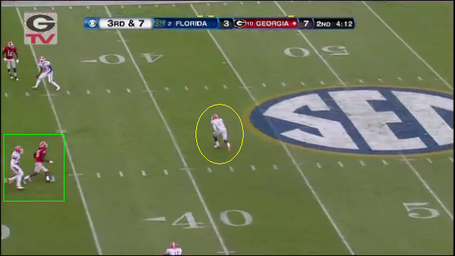 The ball goes to Elam (yellow circle) when it was supposed to go to the receiver (green square).

And that concludes our look back at the Georgia game. I'm done. Next. Sigh.