Mike Gillislee's finest day against LSU was the difference for the Gators against the Tigers.

Who would have thought that it would be against the LSU Tigers that running back Mike Gillislee would have had his finest day?

Admittedly, when an offense runs the ball 58 times and only passes 12 times, it adds up. Gillislee was the beneficiary of 34 of those carries and he took full advantage of them. Gillislee ended up with 146 yards and two touchdowns, toting the rock an average of 4.3 yards per carry.

While the yards per carry number isn't great, it's very acceptable against defensive front like the Tigers'. I'm not sure if he'll be able to end up with the same total numbers against other top defensive fronts like Florida State or South Carolina, but hey, he got the job done.

And no, I don't buy for a second the notion that has been put forward that the only reason why Gillislee and the rest of the Gators rushing attack, which was largely non-existent, was only successful because of some injuries to the LSU defense.

You could see the Gators running game getting into a groove before all the injuries. It was just a matter of time before the Gators' will was going to prevail. It was inevitable.

And it wasn't going to be stopped.

Yes, this is the play that was covered so well (surprisingly, I'm not being sarcastic) on ESPN by their "analysts." 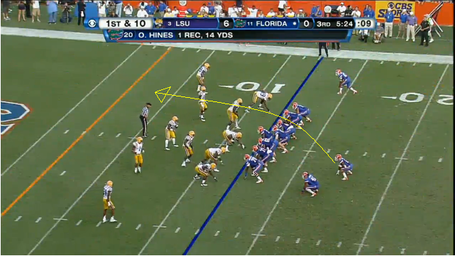 Gillislee is going to take the hand off and run through the right side of the offensive line. As pointed out in the recap that was widely available on TV, notice the amount of offensive lineman in use on the play. Yeah, there is indeed an extra one. There are seven blockers in on the play.

Now, count the number of LSU defenders in on the line. It's a numbers game. 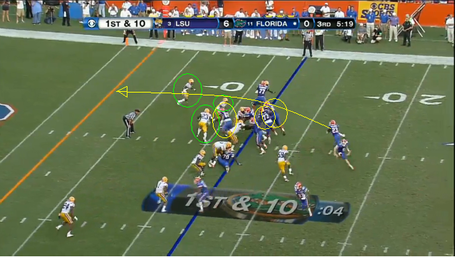 Right after Gillislee gets the ball, notice the number of blockers and defenders that are free. There are three Gators (yellow circles) and three Tigers (green circles). 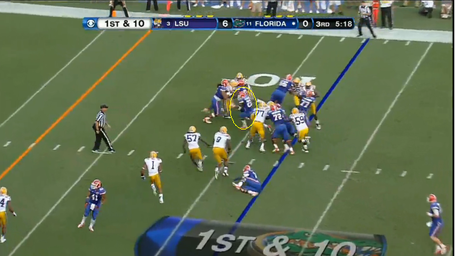 As Gillislee is in the middle of the hole, note the wall of blockers. While it looks crowded, there isn't a LSU defender that really has a shot at making the play. 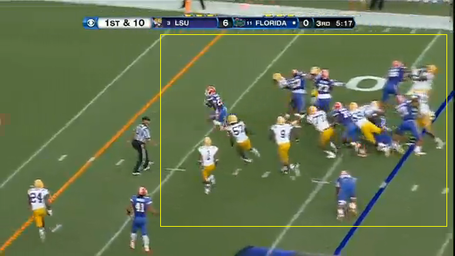 Look at that! That's impressive, I don't care who you're a fan of. 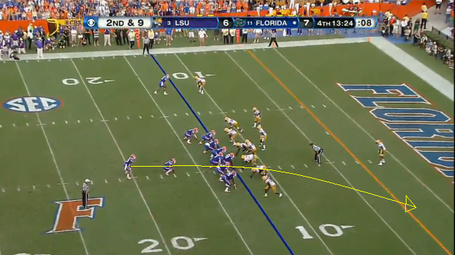 Same play (sort of), same result. Have you ever noticed that roughly 85% of the Gators' running plays this season have been to the right side? Yeah, I hadn't either until about halfway through the second quarter. Well, I mean I had an idea, just never really thought about it. 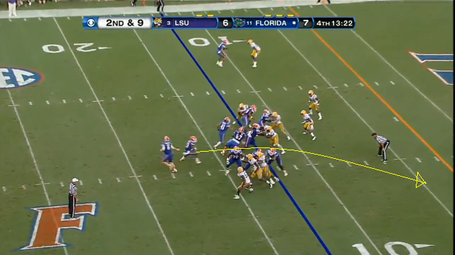 As Gillislee gets the ball, you can see the running lane open up. Another outstanding job by the offensive line on this play.

Speaking of the offensive line, they deserve some major props for the job they did against the LSU defense. Sure they had a few lapses and LSU ended up with like five sacks, but still. The Tigers' defense is one of the top defenses in college football.

If the Gators offensive line performs like this against South Carolina, Georgia and Florida State later on in the year, this team could end up being special.

But I digress, back to the action: 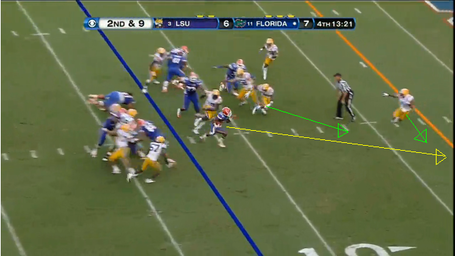 After Gillislee gets to the second level, there are only two players with a shot at getting to him before he reaches the goal line. 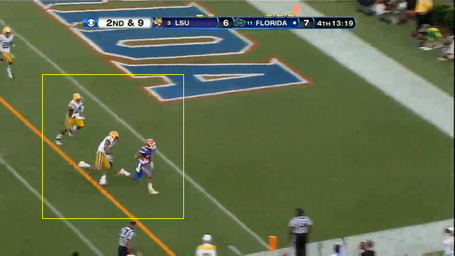 But speed will always prevail. Every time. No matter the situation. As we Gators fans are very much accustomed to.

Head coach Will Muschamp wasn't lying when he said that the Gators were going to be a smash mouth, run first football team. The game against LSU proved it.