Florida's going to be wearing camouflage for the Battle on the USS Bataan against Georgetown next Friday. Alligator Army exclusively reveals what those uniforms look like.

While in the locker room for Monday's Rowdy Fest, a tour of the beautiful Florida basketball facilities, I noticed the picture above stuck to the wall, and took an iPhone shot of it. I believe these are Gators' new camouflage uniforms, to be worn when Florida plays the Navy/Marine Corps Classic against Georgetown next Friday.

Update: I reached out to a Florida spokesperson for confirmation, and was told this photo is "an early rendering of the uniform concept. The final look may vary from that photo."

ESPN's Andy Katz previously reported that the Gators were among the teams that would have camo uniforms:

1. Nike has special camouflage jerseys for the eight teams participating in the military-themed games on Nov. 9 just like it did last year for Michigan State and North Carolina in the Carrier Classic in San Diego. Michigan State's Draymond Green made an impressive gesture when he led the team to give their jerseys to the troops on the USS Carl Vinson. The camouflage jerseys were a big hit with the players. All eight schools participating in the games are Nike-sponsored schools: Michigan State-Connecticut in Ramstein Air Base in Germany; Syracuse-San Diego State in San Diego; Florida-Georgetown in Jacksonville; Ohio State-Marquette in Charleston, S.C.

But no pictures of those jerseys have been available just yet, and so this is an Alligator Army exclusive. 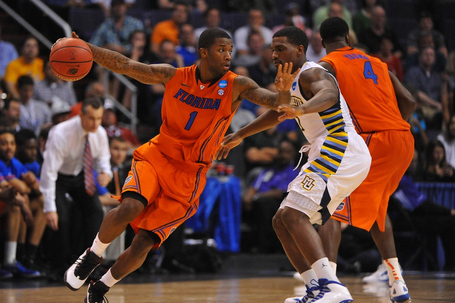 Apart from the camouflage, I'm seeing very little difference between them. 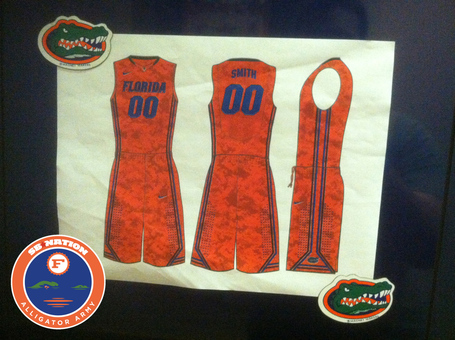 You can also compare them to the uniforms North Carolina and Michigan State wore last year (Harry How/Getty): 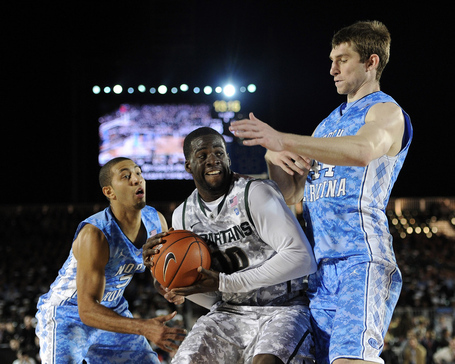 And here's the link to the full-size picture of the Gators' (possible) camo uniforms.

Those UNC and Michigan State uniforms were never released for sale, so hoping for a set of your own here is probably out of the question; these are going to be for the players, and it's up to them to determine what to do with them. But: You can get a very cool Nike "United We Stand" t-shirt for $28.

What do you think about these camo uniforms? Would you buy them if they were available? Do you wish Florida was wearing blue or white with camo? Are you getting that Nike shirt?