A rogue story and a rowdy night on Twitter were ultimately sound and fury. For now.

Share All sharing options for: Andre Debose and De'Ante Saunders aren't transferring (yet)

This story got kicked off last night by an abysmally written post from Brandon Surber at Swamp News suggesting that Debose had been kicked off the Florida team; it got amended to say that Debose did not attend Saturday's end-of-year awards banquet, and that "a source close to Swamp News reported" that Debose would transfer to Louisville and Pop Saunders to Ohio State, and then completely taken down. A screenshot of the amended version of the story is below. 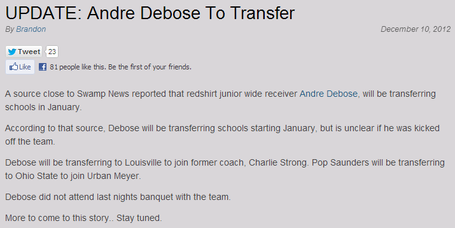 Never mind that Debose, a redshirt junior, cannot transfer to an FBS or an FCS school and play without a waiver (he would have to sit out a year, and has one year of eligibility left), or that Will Muschamp would probably skin a bear with his teeth before allowing a player to transfer to Ohio State, or that "a source close to Swamp News" would tell Swamp News something, and Swamp News would report it. This, combined with persistent and unproven rumors that Debose and Saunders both missed time in 2012 due to failed drug tests, was enough to light the Gators part of the Internet ablaze.

Surber spamming a slew of people with the link surely helped: 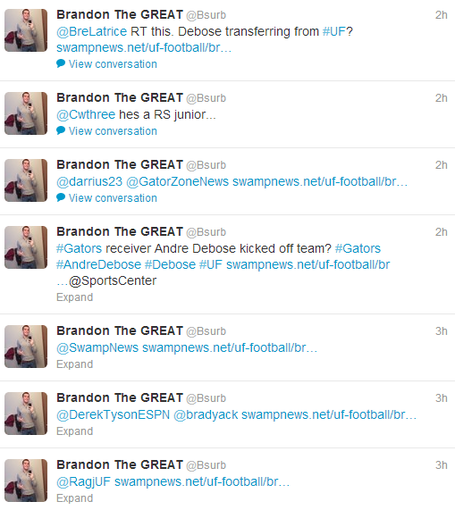 That blaze died down when the Gainesville Sun's Zach Abolverdi reported that Debose was not kicked off the team (or "not kickoff," I guess), that Debose attended the banquet, and that both players told his source that they do not plan to transfer. Abolverdi tends to be almost alarmingly cavalier about protecting his sources; saying his "direct source" talked to Debose and Saunders kinda narrows things down a bit on who it could be, but also makes it pretty clear that this is from the horse's mouth.

Then, before the sheets were "calking" Surber's name, he tweeted this before deleting it:

The entire story about Andre Debose transferring was a joke... Debose is a dumb @$$ lollll#Debose

And he tweeted this to me (I linked to the above tweet):

@alligatorarmy lol hes right here if u wanna ask him something... he has a interview with GZ tomorrow...

What does all of this actually mean for Debose and Saunders? Very little, probably.

Debose is still fairly likely to not be with Florida in 2013, I believe: He's been in the doghouse for a year, missed a game with a "hyperextended knee" that no one I know of thinks he genuinely hyperextended, and has been passed up on the depth chart by walk-ons and true freshmen; he could try his luck by declaring for the NFL Draft and see if his talent can find him a spot, or transfer to an Division II school and play, or simply leave Florida and fade away. (It makes me sad that that is a possibility.)

And Saunders probably has significant work to do to get back to a point where he can see the field, though Muschamp loves him, and would have the option of transferring to an FBS school, sitting for a year, and finishing his playing career with a cleaner slate.

Above all, Florida accepting three commitments while pursuing a half-dozen more players suggests that the Gators are priming for attrition. It might not happen immediately, or at 9 p.m. on a Sunday night. But if Debose "has an interview with GZ" — GatorZone, I assume — "tomorrow," it could happen as soon as tomorrow, in fact, if Surber's suggestion that Debose has been with him and is telling him things is true ... or that interview could be Debose announcing he's sticking around.

(And, though it's neither here nor there, I'd suggest that you should probably not give money to Surber's Koast 2 Koast ... endeavor, considering the quality of work his complete bungling of this situation suggests he brings to the rest of his interests.)

In any case, if Debose and/or Saunders does and/or do transfer, or confirm that they won't, I'll obviously have that for you as soon as it's true. And I'll have much more on attrition in general in the Mailbag, going up around 3 p.m. on Monday.