Florida's Class of 2013 just got a little deeper in the linebacker corps with another four-star commitment.

Sunday dawned with Matt Rolin publicly committed to South Carolina. But before the end of the afternoon, the guy with the username @USC_9 on Twitter had changed his mind, if not his moniker (as of Monday, he's @Rolin_9), and committed to Florida. 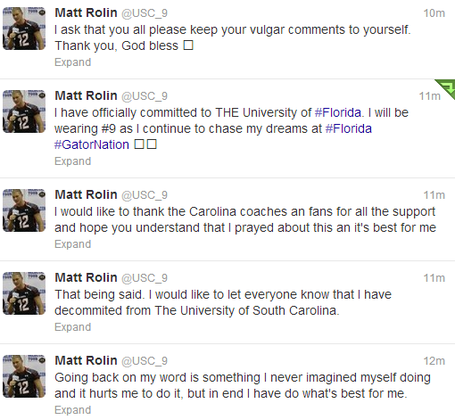 Inside the Gators' Blake Alderman confirmed the commitment after those tweets, and so here we are.

Rolin had long been committed to South Carolina, and switched his commitment after a short flirtation with the Gators that included a visit to Gainesville. It's rare for recruits to swap directly from one school to another, but it happens: Florida and Tre Bell parted ways this summer almost at the same time that Bell committed to Vanderbilt, for example.

Rolin's a consensus four-star prospect ranked No. 141 by 247Sports' Composite rankings, and has good size at 6'4", 210. He also joins a crew of linebackers — Daniel McMillian, James Hearns, and Quinton Powell were all already committed — that will rank with the nation's best at the very least by the time National Signing Day rolls around.

And Florida's class, now up to 24 recruits, is looking like a top-three bunch. At worst.