Yesterday, the fourth ranked Florida women's lacrosse team opened their third season with a loss to number 3 North Carolina at Fetzer Field in Chapel Hill. Despite jumping out to a quick 2-0 lead and stout defense, an inability to clear the ball cleanly and a flurry of turnovers led to a 7-3 deficit at the half. The Gators stepped it up in the second half, trading goals with the Tar Heels and eventually cutting the lead to two with under three minutes to go, but the hole was just too deep, and the Gators fell 11-9. 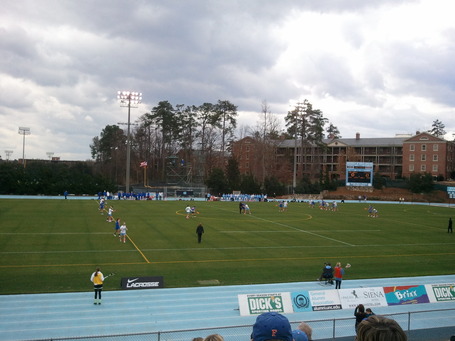 The 11 goals allowed by the Gators belie the tremendous defensive effort by the Gators. UF outshot UNC 25-20, which is a testament to how well the defense played, shutting down the Tar Heel's attack before they could get shots on goal. The Tar Heels made the shots they did get count, though, and the Gators failed to capitalize on the player advantage during Tar Heel penalties.

Despite the cold, dreary weather (upper 40s and overcast at game time), and the UNC men's basketball game, there was a decent turnout. There were even a few dozen Gator fans in the crowd, mostly the players' family, who were genuinely appreciative of the other Gator fans who showed up.

Even in a loss, the Gator lacrosse team was fun to watch. They hustle on defense, creating turnovers and ground balls, and generally frustrating their opponent's offense. On the offensive end, the Gators cut and move the ball. It was easy to see why these are tow of the top teams in the country, and while they didn't come out on top yesterday, year three promises to be an exciting one.