Matt Elam, who is not exactly the most level-headed human being who also happens to be a Florida Gator, tweeted "Ok I'm Convinced that this dude is freaking crazy...!" about a certain picture early Friday morning. So, as Throw The Flag's ParadigmShift35 surmises, this has to be Dominique Easley, right? 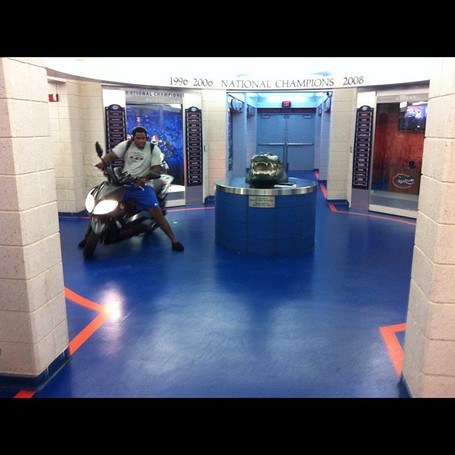 Both Trey Burton and Frankie Hammond are laughing at the picture in the comments at Elam's Instagram page, so I'm inclined to believe that they might know the culprit here. I'm also pretty sure that's Easley because I would know that strong brow anywhere.

But I mostly think this is 100% hilarious. There are far, far worse things that college football players have done on scooters — ask Dawg Sports — and this isn't exactly sacrilegious, just funny and more or less harmless.

Even funnier: @KaityGator saying that her husband yelled at Tim Tebow and Riley Cooper for doing donuts in Weimer.