Could Florida's Gymnastics Team Win Its First National Championship in 2012?

Share All sharing options for: Could Florida's Gymnastics Team Win Its First National Championship in 2012? 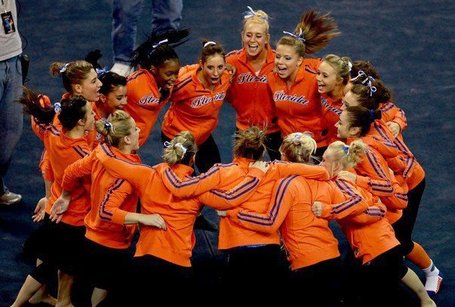 The University of Florida always fields a strong slate of spring sports and this year is no exception. In fact, as of today, Florida's baseball, softball and gymnastics teams are all currently ranked No. 1 in the country. Meanwhile, men's track and field and women's tennis are both ranked No. 2. Which of these teams is most likely to bring Florida's next national championship trophy home to Gainesville?

Many think that Rhonda Faehn's gymnastics team is poised to take this year's title and earn the program's first-ever national championship.

I know. You've heard this all before. Florida's gymnastics team is a fine top-tier program. The Gators can compete against the best programs in the nation, but just can't seem to get over that final hump and bring a title to the Gator Nation. After all, only four different programs have won an NCAA women's gymnastics national championship since the NCAA introduced it as a championship sport in 1982.

But Florida has come painfully close. The Gators finished as runner-up in 1998, and third in 1985 and 2007. Since Faehn took over the program nine seasons ago, the Gators have claimed six top-five national finishes, won two SEC team championships and have earned the 10 highest team scores in school history. Could Faehn's 10th season be the year the Gators finally win it all?

There are many reasons to be optimistic about a possible 2012 gymnastics title. Some are within the Gators' control, some outside of it entirely.

First, the Gators are loaded with talented gymnasts who can compete in all four gymnastics events. Four different gymnasts have competed in the All-Around competition for Florida this season. Sophomore Alaina Johnson's 39.625 score against Auburn last Friday (out of a possible 40) was the highest all-around mark for the Gators so far this season. Amazingly, it was only Johnson's third meet of the year competing in the all-around competition.

Perhaps Hunter is the biggest reason to be optimistic, though. The freshman opened her career by winning the all-around competition for the first three meets of the season.

Aside form the all-around competitors, the Gators have no shortage of depth to compete in the individual events. Sophomore uneven bars specialist Mackenzie Caquatto has won the bars competition for the past four meets, while averaging a 9.912 in the event. Senior Nicole Ellis shores up the vault and uneven bars for the Gators, and has scored a 9.9 in each of the events this year. Junior Randy Stageberg competes on the balance beam and floor exercise for the Gators, has reached the podium (top three finish) in both events this season and has been amazingly consistent - only once scoring lower than a 9.725 this season on either event.

Freshman Rachel Spicer has contributed early and often this season - competing in the beam, floor and vault where she has scored highs of 9.875, 9.85 and 9.85 respectively. Freshman vault specialist Jamie Shisler, floor exercise specialists Keirsten Wang (freshman) and Lauren Rose (sophomore), and senior bars specialist Elizabeth Mahlich round out the Gators deep event line-up.

Next, the Gators are experienced against top level competition. Florida defeated then-No. 1 Arkansas in a four-team meet on January 27 in Gainesville, scoring a (then) national best team mark of 197.775 to earn its first home win over a top-ranked team in 23 years. The Gators topped that mark two weeks later, scoring a 197.85 in its victory over No. 14 LSU on Feb. 10 in the annual "Link to Pink" meet to raise breast cancer awareness (a meet which drew 8,112 fans to the O-Dome).

Florida's only loss of the season came on the road against defending national champion and current No. 3 ranked Alabama on Feb 3, a meet which drew an amazing 12,457 fans to Coleman Coliseum. The Gators will close out their regular season slate against Georgia (tied at No. 3 with Alabama) on Friday at the O-Dome, at No. 9 Nebraska in Lincoln on March 4, and finally at home against No. 5 Utah on March 16. By the time postseason rolls around, the team will have faced five of the best eight teams in the country, including three of the aforementioned "Big Four" schools who hold gymnastics titles. Only Oklahoma (No. 2), UCLA (No. 6) and Oregon State (No. 8) would be unfamiliar to the Gators in potential national championship competition April 20-22 in Duluth, Georgia. Florida will be very familiar with all its top SEC foes at the conference championships on March 24, also in Duluth.

One additional reason for the Gators squad to feel confident is their recent mastery over top rival UGA , the most decorated team in NCAA gymnastics history. Since former Georgia head coach Suzanne Yoculan retired following the 2009 season, her 27th in Athens, the Gators have had much better success against the Bulldogs. The Gators have beaten Georgia four straight times, including dual meet wins in 2010 and 2011, as well as finishing ahead of Georgia in the SEC Championships both seasons. Prior to Yoculan's retirement, the two teams had faced off a total of 122 times, with UGA holding a big 88-34-1 advantage (Ed note - I was at the tie in Athens in 2007 and the Gators were jobbed. A "post-meet score adjustment" upped UGA's score on a previous event to even the overall score after it appeared the Gators had earned the score they needed in the final event to defeat UGA).

The reversal in the rivalry is only partly due to Yoculan's departure and a slight dip in Georgia's performance (after all, they are still No. 3). It has just as much to do with the Gators' continued advancement under Faehn's leadership. Jeremy Foley just showed the UAA's commitment to Faehn and the gymnastics team by approving plans for a massive new state-of-the-art practice facility due to break ground in April and be completed by years end. Friday night's meet against will mark the sixth time in the last seven dual meets between Florida and Georgia that one of the schools is ranked No. 1. Georgia is 3-1-1 against Florida is such situations. (Come out and support these ladies tonight; the first 1,000 fans receive light up slotted sunglasses (pictured here) courtesy of Gatorade.)

One final area outside their control that the Gators have thus far been fortunate is injuries. It is so common for gymnasts to compete hurt, or miss meets due to injury. The Gators will have to continue this fortune and stay healthy to have a legitimate shot to win it all.

So will 2012 be the Year of the Gators in college gymnastics? Can Florida become only the fifth school to ever win a gymnastics national title? Will "Season X" be the lucky one for Rhonda Faehn? The Gators are right there. They own the two highest team scores of the season. They have the highest team average on both the bars and beam, along with the highest overall team score on the floor and second highest overall team score on the vault. It's all there for the taking.

It's up to the Gators to seize it.