Florida Gymnastics Dispatches No. 3 Georgia, Solidifies Claim To No. 1

Share All sharing options for: Florida Gymnastics Dispatches No. 3 Georgia, Solidifies Claim To No. 1

The Florida gymnastics team's first meet this season as the nation's No. 1 team came on Friday night, and against No. 3 Georgia, a rival that also happens to be among the nation's elite teams.

Freshman Kytra Hunter continued her dominant first season in a blue leotard, winning the all-around with a 39.675 — the nation's third-highest all-around score this year — and winning the floor exercise and vault with superb 9.95 marks. Junior Marissa King took the balance beam (9.95) and uneven bars (9.925) with strong performances, and GatorZone's Scott Carter called King's held pose and wink on her dismount a "signature moment" in her return to form on the beam.

Florida led Georgia after each rotation, and bested the Bulldogs in all four events, posting scores of 49.300 or better on each while the Dawgs failed to score better than 49.250 on any apparatus. The Gators had 10 scores of 9.90 or better on the night, with Hunter and junior Ashanée Dickerson notching three each and King and sophomore Alaina Johnson (arbitrarily, my favorite) contributing two each.

In all, it was the sort of superb night against an excellent team that Florida will need to make its standard performance if the Gators are going to win the program's first national championship.

And, on another note, as it was my first-ever gymnastics meet, I had no idea what to expect. But it was a lot of fun. The more than 6,000 people in the O'Dome, probably 40% of whom were 12 or under, made it loud, and the Gators gymnasts put on a show for them in a brisk two hours that featured more things going on and fewer lulls than a basketball game of similar length. The light-up shutter shades the UAA distributed for the game were also a brilliant touch. 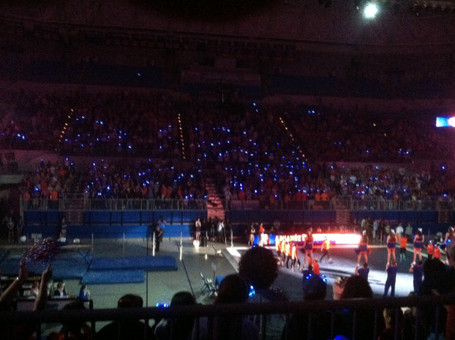 And, of course, a dominant Florida team beating a very good Georgia team will always be fun.