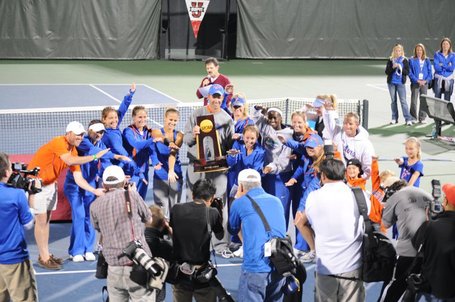 After highlighting the women's lacrosse team and describing why they could be Florida's next national championship team, we next focus on a women's team that is looking for a repeat: women's tennis. Coach Roland Thornvist's squad earned the 2011 national title following an epic championship match victory over Stanford at the Cardinal's own Taube Tennis Stadium, snapping Stanford's 184-match home winning streak that dated back to 1999. Then-sophomore Lauren Embree rallied from a 4-0 deficit in the third set of the deciding match to force a tie-breaker which she won 8-6 to clinch the Gators' victory and national title.

The Gators return all of their 2011 NCAA Tournament players in 2012 and are certainly poised and experienced enough to go back-to-back. Currently, the Gators are 3-0 and ranked No. 1 in the nation. After opening the season with 7-0 shutouts against Troy and UCF at home, the Gators faced their first major test of the season Saturday in Waco, Texas, against the No. 5 ranked Baylor Bears. Led by junior Allie Will, the nation's No. 3-ranked singles player, the Gators defeated the Bears, 5-2. Will clinched the match with her singles victory (6-3, 4-6, 6-2) over Baylor's No. 14-ranked Diana Nakic. Will is now 8-0 on the year (including fall play) and 91-10 in her career in singles play; she has the second highest winning percentage in Gators history, trailing only Florida legend and longtime pro doubles player Lisa Raymond.

The Gators also return No. 4-ranked senior Joanna Mather, and her 84-30 career singles mark. Mather is the captain and leader of the team and is also versatile, compiling a career doubles record of 88-29 despite playing with several different partners.

In addition to Will and Mather, the Gators return Embree, who sports a 69-11 career singles record at Florida and is currently ranked No. 25 nationally. Embree also has a career 70-13 record in doubles play, and, in 2010, became the only freshman to ever be voted SEC player of the year. She has battled some injuries, undergoing two wrist surgeries in 2010 and missing the entire 2010-11 fall season, but nobody who witnessed her championship clinching match last spring can question Embree's toughness. If she can remain healthy, she provides an excellent No. 2 singles player for Florida.

Sophomore Sofie Oyen checks in at No. 34 in the latest ITA Tennis Singles Rankings and owns career records of 32-13 in singles play and 41-8 in doubles action. Oyen is off to a great start for the 2011-12 season, too, notching a 10-2 record on the year in singles and 11-2 in doubles play. She is a perfect 3-0 in both singles and doubles this spring and will need to continue to dominate at No. 5 singles for the Gators to earn vital points if and when her higher seeded teammates struggle against top opponents.

Fellow sophomore Alex Cercone is just behind Oyen at No. 41 in the latest singles rankings. Cercone is 50-14 in her career in singles play and 31-9 in doubles and made the NCAA All-Tournament team last year as a freshman, winning all five of her completed singles matches at the NCAA Tournament Championships. Cercone also teamed up with Will to reach the quarterfinals of the NCAA doubles championships. Cercone is 13-4 in singles play so far this year, despite moving up to play No. 4 instead of the No. 5 spot she played last year.

Junior Caroline Hitimana has been playing the No. 6 singles position for the Gators this spring and is 3-0 in singles play this spring. Hitimana is 42-14 in her career in singles play and was the only player to win a point against Baylor in straight sets. In the national championship match against Stanford last spring, Hitimana teamed up with Mather to clinch the doubles point for the Gators against Stanford.

Sophomore Olivia Janowicz is most known for earning a victory at No. 6 singles in the NCAA finals against Stanford, paving the way for Embree's historic clinching match. Janowicz is 42-12 in singles play in her brief career and is 29-9 in doubles play.

The Gators have won 24 consecutive matches and 97 straight home matches, including 17 postseason matches. The 97-match home winning streak is a program record. The Gators will look to extend their streaks as they defend their home court Tuesday against USF; matches begin at 4 p.m. on campus at the Ring Tennis Complex.

Florida will try not to look ahead to their Sunday, Feb. 12 (re)match against the No. 2 Stanford Cardinal in Stanford, California, which could provide a preview of things to come in this year's NCAA Championships set for May 17-22 in Athens, Georgia. Stanford will certainly be looking to avenge last season's devastating upset on their home court.

Can the Gators repeat and hoist yet another national championship? They have a chance.