I am not a conspiracy theorist by nature or by trade. I like facts, and quantifiable, testable hypotheses, and reasoned arguments. And so I didn't buy into the complaints by the highlight expert Patric Young and others that ESPN has been slighting the Florida Gators all year: Other teams have been more interesting, more impressive, more easily explained.

And I get that gross negligence like SportsCenter's very, very wrong graphic about Florida's trips to the Elite Eight is hard to just accept as a product of stupidity: 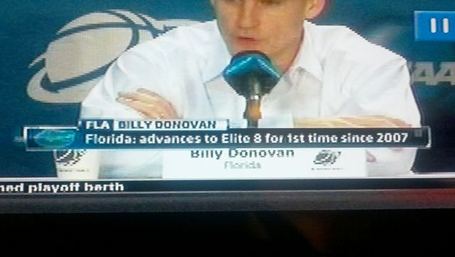 This (screengrab via @BullGatr) ran on at least the 2 a.m. and 3 a.m. SportsCenter shows last night, and it infuriated me and the other insomniac Florida fans then; now, it seems even worse. How does ESPN not have an intern putting together chyrons (the technical term for the on-screen overlays like this one) that remembers that Florida went to the Elite Eight last year? One of the best-ever ESPN.com headlines ("Fredette About It") came from the post-game to Florida's Sweet Sixteen win over BYU in 2011! The Gators lost to Butler in a compelling game that gave Butler its second straight Final Four berth! Nothing was forgettable about that! AND YET IT WAS FORGOTTEN.

There's a maxim, Hanlon's Razor, that I believe in: "Never attribute to malice that which is adequately explained by stupidity." (For example: Bradley is not that far from Brandon.) And it's probable that this erroneous chyron, though egregious, is adequately explained by ignorance on the part of a single actor. But there's no way Kentucky, or Kansas, or Syracuse, or UConn gets this treatment, right?

And that just makes me want to say this to our Gators: Keep working, and keep winning, and you will be impossible to ignore or forget.

You'll also get as much of the April 2 SportsCenter as you want. You know, the one on which the national champions cut down the nets.