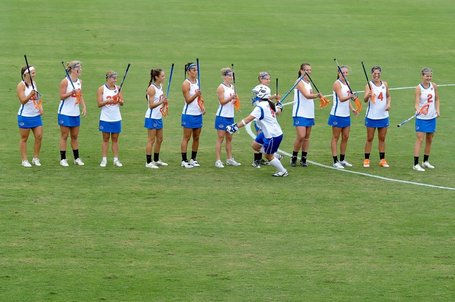 Since the softball team was the only one of these three national title contenders to garner a mention in CAB this morning, I figured they could all use a little more love with a featured update.

The No. 2 ranked women's tennis team continues to obliterate their SEC opponents and became Alabama State Champions this weekend with a pair of 7-0 road drubbings against the Auburn Tigers and the Alabama Crimson Tide. On Friday, the Gators (especially sophomore Alexandra Cercone) actually had to break a sweat, in battling Auburn for over four hours before the last Tiger relented. The No. 3 doubles team of Cercone and Olivia Janowicz wore down their opponents in a tie breaker, (9-8 (7-3)) to sweep the doubles point. In the singles matches, five of the Gators handled their opponents in straight sets. But Cercone faced another marathon at no. 4 singles, needing a 10-6 tie-breaking set to finally defeat Auburn's Jackie Kasler. It was all worth it for Cercone though, as the wins marked her 99th and 100th combined singles and doubles victories, making her the 43rd member of the Gator Century Club.

On Sunday, the Gators faced the No. 13 Crimson Tide in Tuscaloosa in a match to determine first place in the SEC. The Gators left little doubt concerning who rules the SEC roost, Florida again swept the doubles point (Cercone earned a well-deserved day off from doubles play and competed only in singles). The Gators' top five singles players each won their matches in straight sets before Janowicz used a third set to defeat the Tide's Taylor Lindsey to complete the 7-0 sweep.

The two victories run the Gators' record to 15-1 on the season (8-0 in the SEC) with three conferences matches remaining. The Gators return home next weekend to host Arkansas on Friday April 6, and LSU on Sunday, April 8. Florida is nearly invincible at home, having won 103 consecutive home matches. The Gators will finish the regular season in Columbia against the South Carolina Gamecocks on Saturday, April 14.

Meanwhile, on the softball diamond, the No. 4 ranked Gators traveled to Athens, Georgia to face the No. 9 Bulldogs in a key SEC match-up with first place in the eastern division on the line. Friday's game was suspended in the 7th (and final) inning with the Gators down 3-0. When the game resumed Saturday, the Gators went down fighting, plating two runs before losing 3-2. Florida evened the series with a 4-2 victory Saturday afternoon behind five innings of solid relief work by freshman pitcher Lauren Haeger, earning her the win to run her record to 10-2 on the season. Michelle Moultrie and Cheyenne Coyle each went 2 for 3 for the Florida in game two. The Gators took the series by earning a 6-3 win on Sunday, the fifth straight SEC series win for the orange and blue. After a quick one game trip to Tallahassee on Wednesday to face FSU, the Gators return home for a three game tilt against Ole Miss next weekend.

Finally, the No. 4 ranked Florida lacrosse team ran its record to 12-2 with its eighth straight win, a 20-11 victory over the Penn State Nittany Lions in the Gators' ALC home opener on Sunday. Freshman Shannon Gilroy led the Gators with five goals, while junior Ashley Bruns added four more. The win marked the 200th career victory for Head Coach Amanda O'Leary, only the 12th coach in NCAA history to reach 200 division I wins in women's lacrosse. Florida next takes its 2-0 conference mark to Baltimore to face ALC conference foe and No. 17 ranked Johns Hopkins on Saturday, April 7.