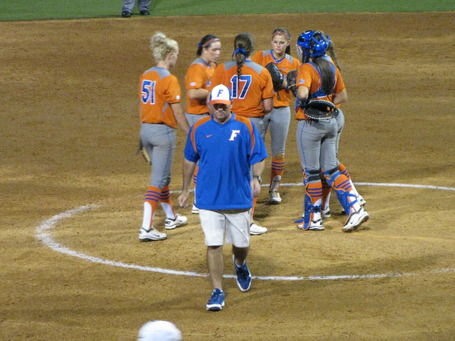 Midweek non-conference games can sometimes trip up good teams - just ask Florida's top ranked baseball team. But that certainly wasn't the case for the Gators' No. 6 ranked softball team, as they came out swinging and made quick work of the No. 21 ranked Florida State Seminoles Wednesday night in Tallahassee. Florida State had won ten of their previous 11 games and nearly 1,200 hopeful fans turned out to see their beloved Seminoles try to upset their cross state rival, setting a new JoAnne Graf Field attendance record. But Florida would have none of it, as Junior Catcher Kelsey Horton went 3 for 4 with a homer and 3 RBIs to lead the Gators offense. Freshman Sami Fagan hit her first career home run, a three-run blast in the third, to help pace a six run inning which broke the game open.

Ace pitcher Hannah Rogers started for the Gators, earning the win and running her record to 18-2 on the season. Rogers scattered four hits and yielded one run to the Seminoles over six innings before the game was called early due to softball's "eight run rule." It was the Gators' 13th mercy rule victory this season.

Florida improved its record to 32-4 on the season and returns home this weekend for a three game series against the Ole Miss Rebels.