Florida Vs. LSU: And The Valley Shook Talks About Losing Their Luster and Some Guy Named Raph

Share All sharing options for: Florida Vs. LSU: And The Valley Shook Talks About Losing Their Luster and Some Guy Named Raph 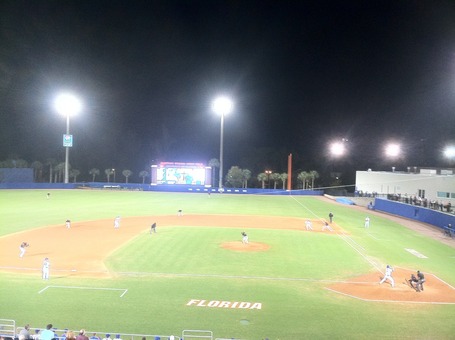 As we did during the NCAA Tournament, we traded questions with the opposing team's bloggers. Now, we're continuing it with baseball and with the the upcoming series against the LSU Tigers looming, we asked And The Valley Shook, SB Nation's LSU Blog, ahead of tonight's game. PodKATT has been gracious enough to answer our questions.

LSU hasn't made the College World Series since winning it all for title number six in 2009. The Bayou Bengals have always been thought of as a national power, so what do you attribute the lack of reaching Omaha, and what do you think the chances are they make it this season?

The 2010 season ended in a regional at UCLA and most chalk it up to the ebb and flow of the program in the post Skip Bertman era, but not even making Hoover last year was a serious shock in Baton Rouge. A combination of the new bats forcing a change in philosophy and a pitching staff that wasn't really developing like it should led to the first year without a post season for quite some time. Changes needed to be made and to Coach Mainieri's credit, they have. We've brought in a new pitching coach from the Orioles organization and improvement is starting to show on the mound. I'm still not fully on board with our current offensive strategies, but it's hard to argue when you just swept the #3 team in the land. I'm not ready to make a guess yet about where this team will be in June, but I think it's safe to say we are at least back in the postseason for sure.

The Tigers are coming off a huge sweep of #3 Arkansas this past weekend. What do the players and coaches need to do now that they are traveling to the #1 team in the nation's home turf to try to stay focused and keep the intensity going? And how big is this series with Florida as sort of a measuring stick for this year's team?

After being swept by the Gators 2 years straight, I don't think this team is going to have any trouble being focused and pumped up for Florida, especially coming off last weekend. Your first question sort of hints at the fact that some of the shine has come off the LSU program of late and this weekend is an opportunity to get some of it back. Mainieri had a great quote to the local TV stations before the teams hopped on the buses "Not to sound pompous, but we're LSU. We're not afraid of anyone." I think that's the kind of attitude they'll have going in. I just hope they can sustain it if things go south. This series is going to go a long way in determining what both fans and the national press think of LSU, and a series win might put us in the national seed discussion for regionals.

Who's someone on the LSU roster that Gator fans might not know now, but will surely know after this weekend?

To a casual fan, it's going to be LF Raph Rhymes. He's the conference's leading hitter and went on a tear last weekend, hitting .583 (7-for-12) in the ARK sweep with one homer, six RBI, one run, one steal and a .643 OBP. He's instant offense and takes great advantage of his cleanup spot in the lineup.

I'd expect a serious UF baseball fan to be aware of the SEC's leading hitter, though, so I'll say CF Jared Foster. In the fall he was a 2-sport guy as the 6th string walk-on QB, but since the beginning of the season he's given up football entirely and now, thanks to the unfortunate neck injury to Chris Sciambra, he's been thrust into the starting CF role. His number's aren't great, but he's adjusted well to his role in the defense so far. With the way UF hits, he'll need to be on top of his game all weekend.

Earlier in the season, the Tigers regularly scored 10+ runs. They also help opponents to under five runs all but four times on the season. What is the strength of this year's team? Pitching, hitting, or defense?

It's the pitching, to be sure. Some of the experts think we have one of the best Fri-Sat pairs in the nation in Gausman and Eades (who will be starting games 2 and 3 of this series, respectfully) and both show it consistently on the mound every weekend. The staff overall is heating up lately, last weekend pitching a combined 40 strikeouts to just 5 walks, and that was against Arkansas, who lead the SEC in walks. I am worried that we will be without Sunday starter Aaron Nola, who was pulled early last week on a shoulder pain. Kurt McCune will start in his place on Friday. McCune lost the Sunday job to Nola after a handful of lackluster outings, but has done well coming out of the pen in SEC play. He's just going to have to step it up, or else we could end up burning some of our relief on the first night.

How do you attack this LSU lineup, with six out of nine batters hitting over .300 and Raph Rhymes leading the SEC with a blistering .491 average?

Throw strikes and play good defense. LSU can be fooled at the plate, and the recent improvements in overall confidence could have guys swinging a bit too loose. And I can't tell you how many times a small rally in an inning gets killed by a ground ball double play or a baffling base running mistake. You may just want to pitch around Rhymes, but throw some ground balls at the Tigers and a good defense will keep them in check.

I'm personally glad to hear that last part. Hudson Randall, Brian Johnson, and (we all hope he plays) Karsten Whitson all throw strikes and the Gators are near the top of the SEC in fielding percentage. Sounds like the Friday's game could be a great pitcher's duel. Catch game one Thursday at 7:30 p.m. on ESPNU.