The Florida Gators men's and women's track and field teams were both successful on Saturday if you look past the current standings. And since I'm a "glass half full" type of guy (not really when it comes to sports, but it does sound better) that's how we're going to look at things.

In Saturday's women's field events, jumper Taylor Burke (who is also the starting goalkeeper on the soccer team) won the SEC Championship in the high jump with a best height of 1.83 meters. She accomplished that Championship by clearing 1.83 meters on her first five jumps.

As for the women's track events, Genevieve LaCaze won the 3,000 meter steeplechase SEC Championship with a time of 10:13.99 seconds. For her championship she picked up ten points and moved the Gators closer to the top of the standings.

As always, more on the men's team and a preview (and schedule) of Sunday's events after the jump.

The Gators (men's) aren't going to win the SEC Championship by under-performing. Especially since they're missing Gray Horns automatic ten points in the decathlon.

While we're on the subject of disappointing, neither Dedric Dukes or Leonardo Seymore will be competing in the 100 meter finals on Sunday either after finishing tenth and sixteenth in the prelims. Losing Jeff Demps to a "tweaked" hamstring hurts. Much in the same way that losing Horn hurts. That's nearly 20 points left out in the open.

In the 400 meter dash prelims, Tony McQuay cruised to a second-place finish with a time of 45.88 seconds. He finished 0.04 seconds behind Torrin Lawrence of Georgia and I suspect that it will be one of them who will win the SEC Championship on Sunday.

Does that count as going out on a limb? No? Didn't really think so. Remember, I'm a "glass half full" type of guy. Or so, whatever.

In the 110 meter hurdles prelims, Eddie Lovett continued to impress with a second-place finish. His time of 13.74 seconds guarantees that he'll be running the hurdles on Sunday. Mark Parrish missed out on points by finishing ninth in the 3,000 meter steeplechase with a time of 9:18.03 seconds.

The action resumes Sunday at 2:00 p.m. and continues on until roughly 7:30 p.m. For a quick reference guide on Sunday's schedule, here's a neat spreadsheet: 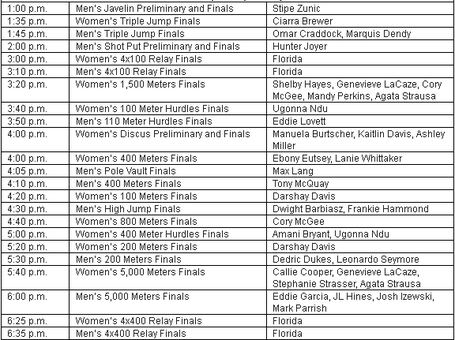 (Please note on the schedule that the times listed are in central time.)

As you have throughout the entire meet, you can view all results up-to-the-minute online courtesy of Delta Timing. You can also watch the action live on ESPN3 if you so choose. Also, ESPNU will air a highlight show of the Championships on May 23rd from 8:00 p.m. to 10:00 p.m. ET if you missed any of the action and prefer to watch things on the television.