The Florida Gators track and field teams will leave Baton Rouge and the SEC Outdoor Championships behind them without winning a team championship. But that was somewhat to be expected. The men's team finished fourth overall (behind Arkansas, LSU and Georgia) and the women's team finished second (behind LSU).

Yes, I know that a second and fourth place finish is nothing to be ashamed of. While they might have expected to accomplish more, the writing was on the wall (especially the men's team) before the Gators landed in Baton Rouge. It's a numbers thing.

And yes, it is much more difficult to win the outdoor championship (SEC or NCAA) than it is to win the indoor crown. It's just the way they are set up. Teams like Arkansas who have monster distance programs compared to a team like UF who have monster field programs can enter more athletes in a particular event and thus potentially get more points.

All wasn't lost though. Among the many success stories for the Gators were: Genevieve LaCaze winning so many titles (and trophies) that she'll probably never stop smiling and Stipe Zunic winning his sixth-straight javelin crown. Oh, and the relay teams did their thing. You know what that is by now.

Since we've already mentioned Zunic, let's just get this out of the way. Zunci's throw of 77.78 meters won the javelin event by over four meters. It was his sixth-straight victory in the javelin and he's definitely the favorite to win it at the NCAA meet in June. Of course he's technically got to go through the prelim meet, but we'll get to that later. Because that meet should be more of a formality than anything else. 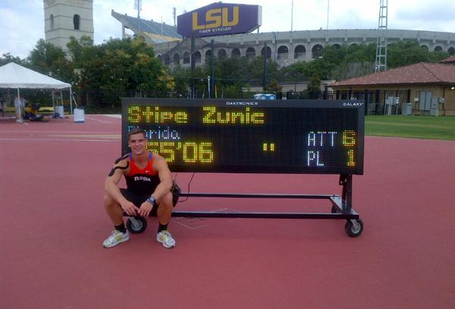 (Photo courtesy of @GZTrackField on Lockerz)

Among the highlights of the women's field events on Sunday: Ciarra Brewer won the triple jump and Ashley Miller came in fourth in the discus. For their exploits they earned a combined fifteen points which went a long way in contributing to their second-place overall finish.

Kaitlin Davis added to the total (two points) by finishing seventh in the discus with a best distance of 47.06 meters.

In the women's running events, the 4x100 meter relay team got the ball rolling by finishing fourth with a time of 44.63 seconds. Next up was the 1,500 meter run in which LaCaze and Cory McGee finished one-two with times of 4:13.44 and 4:15.46 seconds respectively. Yeah, that event was just one of the many that LaCaze won throughout the Championships. One of those other victories for LaCaze was the 5,000 meter run with a time of 16:26.38 seconds.

In the 800 meter run, Cory McGee finished sixth with a time of 2:05.99 seconds. The third-place theme returned in the 400 meter hurdle event with Ndu (again) finishing in third and Amani Bryant finishing fourth. The women's 4x400 meter relay team finished fifth with a time of 3:35.58 seconds.

As for the men: remember what I said at the beginning. It's a numbers thing.

Omar Craddock won the triple jump with a best distance of 16.68 meters. Marquis Dendy finished sixth in that same event. Hunter Joyer would go on to earn one-point with his eighth-place finish in the shot put. Dwight Barbiasz won the high jump title with a best height of 2.25 meters.

In the 4x100 meter relay, the Gators team received a did-not-finish (DNF). In the 110 meter hurdles, Eddie Lovett finished in second-place behind Barrett Nugent of LSU with a time of 13.65 seconds.

Tony McQuay won the 400 meter dash championship with a time of 45.48 seconds. McQuay continues to have a strong season overall and it wouldn't surprise me if he's the NCAA champion when the outdoor season is all said and done.

In the 200 meter dash, both Dedric Dukes and Leonardo Seymore earned points by virtue of their fifth and eighth-place finishes. Dukes' time of 20.61 seconds and Seymore's time of 21.02 seconds earned the men's team a total of five points. In the 5,000 meter run, Josh Izewski missed out on a points finish by roughly eight seconds. His time of 14:45.46 seconds was good enough for literally the best finish outside of Arkansas, Georgia and Kentucky in that event. Izewski finished ninth.

Remember... numbers. It's a whole thing.

In the final event of the day, the 4x400 meter relay, the men's foursome of Dukes, Hugh Graham Jr., Seymore and McQuay finished first with a time of 3:03.44 seconds. The ten points earned wasn't nearly enough to place the men's team any different.

Next up for the Florida Gators is the NCAA East Preliminary Round which will be hosted by the University of North Florida Ospreys and will be held in Jacksonville. The prelim meet will start on May 24th and continue on through the 26th. The University of Texas will host the other (West) preliminary round meet.