Stipe Zunic, Two Others Qualify For NCAA's On First Day Of East Preliminary

Share All sharing options for: Stipe Zunic, Two Others Qualify For NCAA's On First Day Of East Preliminary

Since there aren't any pictures of the events from yesterday and I refuse to use an old one, we're going to have this column be in the style of The Grey Lady.

While Demps didn't qualify for Des Moines on the first day -- though with the way qualifying was set up, it was nearly impossible -- there were three members of the Florida Gators track and field teams who did. Stipe Zunic (surprise!), Marquis Dendy and Florence Ngetich all qualified for the NCAA Outdoor Championships by virtue of their work yesterday.

Zunic won the javelin throw with a best distance of 74.06 meters, which he accomplished on his first throw. He did attempt his five other throws instead of taking a pass, but he was basically just going through the motions. Dendy also won his event, the long jump, with a best distance of 7.81 meters. Dendy did take a pass on his last three jumps once victory was certain.

Ngetich, who was the only women's team member to qualify for the Championships, qualified based on her sixth-place finish in the 10,000 meter run with a time of 34:26.88 seconds. She made the cut by around sixteen seconds, which in terms of track time is a long time.

There's more on how the Gators fared on the first day, along with a preview and viewing information for day-two after the jump.

Aside from Dendy, Ngetich and Zunic qualifying for the NCAA's, the Gators experienced mixed results at the East Preliminary round in Jacksonville, Florida.

In the women's long jump, neither Lorraine Graham and Daniela Griffin had a jump good enough to move on in qualifying. Though Graham's jump of 6.13 meters was close, it just wasn't good enough. Griffin's best jump of 5.90 meters was good for thirtieth-place.

Darshay Davis finished twentieth in the women's 100 meter dash with a time of 11.71 seconds. Her time was good enough to qualify for today's quarterfinal and like the situation that Demps is in, a trip to the NCAA's are on the line.

The Gators did have two women qualify in the 400 meter dash: Lanie Whittaker (second-place, 52.46 seconds) and Ebony Eutsey (twentieth-place, 53.70 seconds). Both of them will compete in today's quarterfinal event as well.

In the women's 1,500 meter run, only Cory McGee advanced to run another day. Her time of 4:24.31 seconds was good enough for a sixteenth-place finish. Agata Strausa, Mandy Perkins and Shelby Hayes all failed to make the cut. As for the women's 400 meter hurdles, they do say that two out of three ain't bad, right? Well, Ugonna Ndu won her heat with a time of 58.73 seconds and Amani Bryant finished second in hers with a time of 59.26 seconds. Both Ndu and Bryant will race later today.

On the men's side of things, both Tony McQuay and Hugh Graham Jr., qualified for the next round of the 400 meter dash with their times of 46.24 and 46.60 seconds respectively. McQuay won his heat, which was basically a walk-through and I still think that McQuay has a great chance of winning the NCAA Championship in this event.

As promised, the schedule for today: 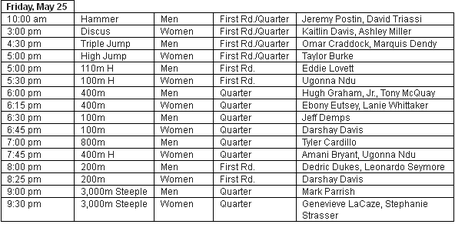 As was the case with yesterday, the North Florida Ospreys athletic website is your home for meet central. They've also got a live video feed (click hi-res if you can, it's worth it) at the same location under the "webcast" option. Flash Results will once again handle the online timing as is customary.

If you can't follow the meet live or online, Alligator Army has your back. We'll have a full update as soon as possible (probably before the start of the next day) once the competition for the day is over.