Jeff Demps withdrew from his heat in the 100 meter dash on Friday due to his troublesome hamstring and, as a result, will not be competing in the NCAA Outdoor Championships in June. Given his primary goal of making the USA Track and Field Team for the Summer Olympics this year in London, England, it was probably the right move.

Winning an Olympic Medal has always meant more than winning something in college. The risk of making the injury worse just isn't worth the risk for Demps.

After the jump: schedule and viewing information of events for Saturday, the last day of the prelims.

Davis qualified for the 100 meters in Des Moines, Iowa with a time of 11.48 seconds. Burke, who has come on as of late in the high jump, finished third in the prelims with a best height of 1.81 meters. That height was easily good enough to qualify for the NCAA Championships.

Whittaker's time of 52.22 seconds in the women's 400 meter dash was good for fifth-place and an automatic trip to the NCAA Championships. LaCaze, who finished fourth in the 3,000 meter steeplechase, basically ran at a controlled pace because she was going to qualify even if she took a lunch break during her run.

LaCaze is also going to attempt to earn the Olympic A standard in Des Moines. What that means is that if she hits a certain time and gets the standard, she's automatically on the Olympic track team. She's got a good shot at hitting the standard, so why not?

The men's triple jump saw both Craddock and Dendy qualify for the NCAA's with best distances of 16.55 meters and 15.55 meters respectively. Dendy's jump was also a personal record. In the hammer throw, Postin also cruised to a spot at the Championships with a best distance of 66.50 meters.

The final NCAA qualifier of the day was McQuay. Though it's not surprising that he qualified in the 400 meter dash, what is surprising is that McQuay set a seasonal best with his time of 45.51 seconds. He's got a really good shot at winning an individual championship in June. 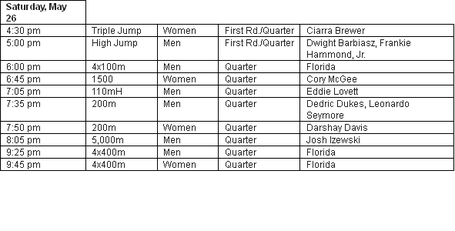 The action resumes today at 4:30 p.m. and continues on until about 10:00 p.m. Technically, I should say that the action starts at 11:00 a.m., but since there isn't a Gators athlete involved, it seems like a golf outing until 4 o'clock or so is more appropriate.

As has been true throughout the meet, the University of North Florida Ospreys athletic site has your meet central information. There's also a webcast for live viewing online. Flash Results is once again your place for up-to-the-second results online.

Alligator Army will have a review of the NCAA Championships qualifiers as well as a recap of today's events tomorrow morning.