The Florida Gators will send 17 individuals and 2 relays teams (10 on the men's side and 9 on the women's side) to the 2012 NCAA Outdoor Track and Field Championships that will be held June 6-9 in Des Moines, Iowa. While neither team has any real shot at an overall team championship, they will no doubt be in contention for quite a few individual and possible relay crowns.

The men's 4x100 meter relay team dropped the baton between the 2nd and 3rd leg and as a result will not be heading to the NCAA Championship. In case you were wondering, the 2nd leg was Tony McQuay and the 3rd leg was Leonardo Seymore. I'm not exactly sure what the issue was as I missed it live, but I'm sure it was something simple.

They almost always are in those situations. Just bad luck.

More on who will be representing the orange and blue at the 2012 NCAA Outdoor Championships in Des Moines, Iowa after the jump. I've also made a prediction or two which are pretty much guaranteed to be incorrect. And I promise you that fact is not by clever design or anything.

There were only two field events yesterday that the Gators were competing in and they took full advantage of them. Barbiasz and Brewer each easily qualified in their respective events by finishing sixth (Barbiasz, 2.19 meters) and fifth (Brewer, 13.30 meters). The only other possible qualifier was Frankie Hammond Jr., but his best height in the 2.02 meters in the high jump was about 25 places away from qualifying.

In the women's 1,500 meter run, Cory McGee finished in a very respectable third with a time of 4:16.36 seconds. The other distance event of the day was the men's 5,000 meter run and the Gators had one athlete competing in it. However, Josh Izewski failed to deliver with a time of 15:02.95 seconds.

The last individual to earn a qualifier spot for the Gators was at the NCAA's was Lovett. He'll be representing the Gators in the 110 meter hurdles. He finished in sixth-place with a time of 13.65 seconds.

As mentioned above, the Gators had a mishap in the men's 4x100 meter relay, but the day wasn't as dreary for the other two relay teams. The women's 4x400 meter relay team finished sixth overall with a time of 3:34.46 seconds. Ebony Eutsey, Amani Bryant, Lanie Whittaker and Ugonna Ndu comprised of the team that will advance to the NCAA's.

The men's 4x400 meter relay team of Dukes, Hugh Graham Jr., Seymore and McQuay finished third overall with a time of 3:03.64 seconds. They won their heat by almost a second, so it's easy to see that if pressed with tougher competition they'll be up to the challenge.

The full list of Gators heading to the Outdoor Championships: 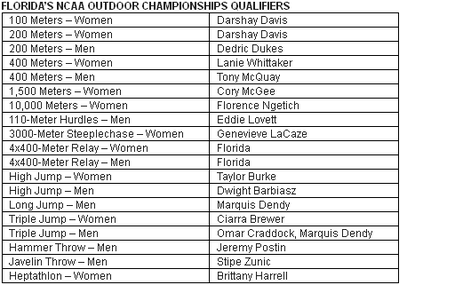 It's going to be an interesting National Championships that's for sure. From that list, I see plenty of athletes who've got a great shot at winning an individual championship. I'll set the over/under at three. Give me: Brittany Harrell, Marquis Dendy, Genevieve LaCaze and Stipe Zunic to win.

Now watch as I've just jinxed everyone but Zunic. If he's healthy, and there's no reason to suspect otherwise, he's going to be the javelin national champion.