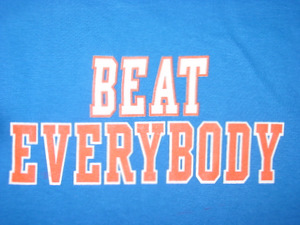 These are the days when it truly is great to be a Florida Gator. Starting with baseball, the No. 5 Gators defeated the No. 3 Kentucky Wildcats 5-1 Friday in Lexington to assure a weekend series victory over the 'Cats (which helps soothe the sting of losing yet another top hoops recruit who is still considering UK). Florida was led by second baseman Casey Turgeon's 3 for 4 night and some great pitching out of the bullpen. Karsten Whitson started for the Gators and scattered six hits over 4 2/3 innings of work, but yielded only a single run. From there, Bobby Poyner, Greg Larson and Steven Rodriguez shut down the 'Cats the rest of the way, with Poyner earning the win and Rodriguez notching the save. The Gators improve to 35-12 on the season (14-9 in the SEC) and a second place tie with Kentucky...1 1/2 games back of South Carolina in the East. Florida will look to finish off the sweep of Kentucky Saturday, with the first pitch at 2pm.

Meanwhile, Florida's No. 7 softball team downed the No. 4 Alabama Crimson Tide 4-1 on Friday in Tuscaloosa. Lauren Haeger went 3 for 4 and Sami Fagan went 2 for 4, to combine for five of the Gators' six hits. Hannah Rogers pitched a gem for Florida, improving to 26-4 on the season and handing Tide ace Jackie Traina only her second loss of the season (29-2). Florida improves to 44-8 on the year (21-5 in the SEC) and ties them with Alabama for the conference's best record. The weekend battle continues with a 4pm game on Saturday and a 3pm finale on Sunday.

Finally, the No. 3 Gators lacrosse team advanced to the ALC tournament championship game by defeating THE Ohio State University Buckeyes in a hard fought 5-4 semifinal match on Friday in Gainesville. Nora Barry and Nicole Graziano scored two goals apiece for the orange and blue. Florida will face the No. 1 ranked Northwestern Wildcats Saturday at 12:30pm and will try to earn its first ever ALC tournament championship. The 16-2 Gators handed Northwestern (17-1) its only loss of the season on April 21 in Evanston, earning Florida its second straight ALC regular season championship.