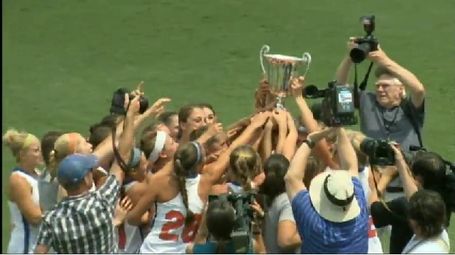 The Florida Gators earned its first ever American Lacrosse Conference Tournament Championship by defeating No. 1 Northwestern 14-7 Saturday at Donald R. Dizney Stadium in Gainesville. Freshman Shannon Gilroy led Florida with seven goals (on only nine shots!) while Junior Kitty Cullen added three more. The Gators victory left both teams at 17-2 on the season, with both of Northwestern's losses coming at the hands of the Gators.

Next up is the NCAA tournament where the Gators will try to win the program's first lacrosse national title in only its third year of existence. Congratulations go out to this amazing team and to Coach Amanda O'Leary, as they continue to exceed even the most optimistic of expectations!