Tony McQuay led the charge for the Florida Gators at the NCAA Outdoor Championships on Wednesday by running a personal best in the men's 400 meter semifinal. His time of 44.67 seconds was easily fast enough to not only win his heat but finish in first-overall in the semifinal round.

LaCaze however, was the only Gator aside from McQuay that performed up to their expectations. LaCaze finished ninth in the women's 3,000 meter steeplechase with a time of 10:06.78 seconds and will be running in Friday's final. Dendy finished in tenth-place (two places out of a points finish) in the long jump with a best distance of 7.61 meters. Davis finished last in the women's 100 meter dash semifinal with a time of 11.69 seconds and will not be moving on the final round.

Whittaker finished tenth in the women's 400 meter dash with a time of 52.49 seconds and will also sit out in the final round. As a team neither the Gators men or women have scored any points thus far, but it's not like that wasn't to be expected at this point.

That will change today as Stipe Zunic is up for the javelin. 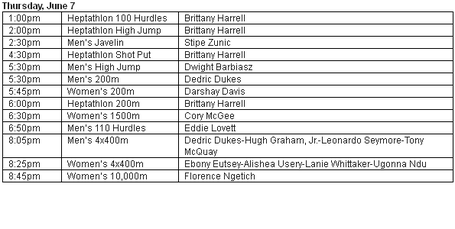 Remember that the above schedule is central time so take that into account if you plan on watching any of the action. Flash Results will once again handle the results online and ESPN3 will air the Championships online beginning at 6:15 p.m. ET (5:15 p.m. CT) for those interested in watching the meet.