Share All sharing options for: Florida Gators Struggle (And Get Lucky) During Day-Two Of NCAA Outdoor Championships

The Florida Gators had an interesting second day at the NCAA Outdoor Track and Field Championships on Thursday. I say "interesting" mostly to be nice. Which is probably because as a former cross country and track and field athlete, I get it. I understand that off days in running and in field events happen even though non-runners and the like continue to think otherwise.

But sometimes lady luck throws you a bone.

Even it does mean that someone else has been disqualified.

In the second-to-last event of the day, the women's 4x400 relay team finished ninth overall and out of a qualifying place for Saturday's final. However, roughly an hour later it was announced that the Illinois relay team was disqualified and that the Gators by virtue of them being the first team out, got the last spot.

It didn't turn out roses like that for the rest of the Gators unfortunately. Nearly every athlete or relay team struggled on the day. That includes javelin extraordinaire Stipe Zunic. Zunic finished a disappointing seventh in the javelin with a best distance of 73.99 meters. That distance of course fell well short of the 80 meter goal he set for himself before the Championships began.

More on how the Gators performed on day-two (and a quick look at the overall standings) as well as the usual schedule and viewing information after the jump.

The only Gator athlete (thank you, Gray Horn) to be competing in a multi-event at the NCAA Outdoor Championships is Brittany Harrell. Her event, the heptathlon, began today with the 100 meter hurdles. Harrell ran the 100 meter hurdles in 14.07 seconds, had a best height of 1.69 meters in the high jump, a best distance of 11.45 meters in the shot put and 24.81 second finish in the 200 meter dash. She's currently in twelfth-place overall with 3,339 points. Which is roughly five-hundred points behind the leader.

In the finals of the men's high jump, Dwight Barbiasz accomplished two things. First, he finished in third-place (which is worth six points) with a best height of 2.28 meters. Second, that height qualifies as the "Olympic A" standard and he'll be part of the Olympic Qualifying team that will compete in Eugene, Oregon this summer for a shot to be part of the 2012 Summer Olympics.

As for the rest of the track events... Well, you might want to look away from the computer for a minute or two. Or at least scroll down to the schedule of today's events. Except for the men's 4x400 meter relay recap, that one was alright.

In the men's 200 meter dash prelims, Dedric Dukes finished eleventh overall with a time of 20.68 seconds and will miss out on Sunday's final. In the men's 110 meter hurdles prelims, Eddie Lovett finished an acceptable seventh with a time of 13.53 seconds and will compete in the final round later on this weekend. Lovett along with Spencer Adams of Clemson were the two "bonus" qualifiers for the final round based on their finishes.

In the men's 4x400 meter relay, the foursome of Dukes, Hugh Graham Jr., Leonardo Seymore and Tony McQuay finished in fifth-place with a time of 3:02.34 seconds and by virtue of that time will race again Sunday.

In the women's 200 meter dash, Darshay Davis finished out of the running in seventeenth place and did not advance to the final round. Cory McGee did much better in the women's 1,500 meter run when taking in finishing places. McGee finished seventh in the prelims with a time of 4:12.93 seconds and will race in the final round later on in the Championships.

Florence Ngetich finished the day off for the Gators with a twentieth-place finish in the women's 10,000 meter run. She missed a scoring finish by about a thirty seconds. 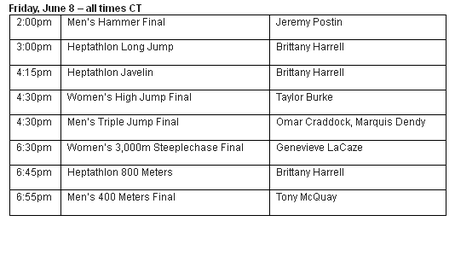 Once again please note that all times are in central time. Please adjust accordingly. Flash Results will be handling the online aspect of the results and ESPN3 will once again broadcast the Championships online for free beginning at 6:30 p.m. ET (5:30 p.m. CT).