The Florida Gators rebounded nicely from a tough second-day at the NCAA Outdoor Championships with two individual national titles and two runner-up finishes yesterday. The men's team even took over the overall points lead heading into today's action, which is also the final day.

Omar Craddock and Tony McQuay each won their respective event and thus a national championship yesterday respectively. Craddock won the triple jump with a best distance of 16.92 meters which he accomplished on his forth jump to outpace the second-place finisher by 0.30 meters.

Marquis Dendy finished a disappointing twentieth in the triple jump, but because he's just a freshman, he's got much better days ahead of him. It would have been nice for him to have earned some points (for both himself and the team), but he had a wonderful freshman campaign.

As expected, Tony McQuay won the 400 meter dash championship with a time of 44.58 seconds which set his personal best. His victory in the 400 meter dash was the event that vaulted the Gators to the top of the team leader board as his ten points pushed the team passed Virginia Tech and into first-place overall through eleven events.

More on how the Gators performed on Friday along with a schedule for Saturday, viewing information and a final prediction after the jump.

The only other athlete on the men's side of things in action yesterday was Jeremy Postin who was competing in the hammer throw. Postin's best distance of 69.47 meters was good enough for second-place overall and ended up to be about five meters behind national champion Alex Ziegler of Virginia Tech.

The women's team had three athletes competing yesterday and for the most part, they all three had a very respectable finish. Brittany Harrell finished sixteenth in the heptathlon (though she was one of only four non-juniors or seniors in the field), Taylor Burke finished in a tie for ninth overall in the women's high jump and Genevieve LaCaze just missed a national championship in the 3,000 meter steeplechase.

To finish up her heptathlon, Harrell finished eleventh in the long jump (5.76 meters), fourteenth in the javelin (34.40 meters) and finished eighteenth in the 800 meter run with a time of 2:25.36 seconds. All in all, for her being a sophomore, not a bad finish at all. If she continues her current pace she'll be a top five finisher by her senior year.

In the high jump, Burke earned her ninth-place finish with a best height of 1.83 meters and just missed out on a points finish. LaCaze finished second in the 3,000 meter steeplechase by about a quarter of a second with a time of 9:50.25 seconds. Burke who is a freshman has a bright future ahead of her and with LaCaze being a senior, she goes out with having nothing left to prove in a fantastic career.

Currently the men's team is in first-place overall with thirty-six points and the women's team is in a tie for twenty-second with eight points. Today is the final day and in action for the Gators are: 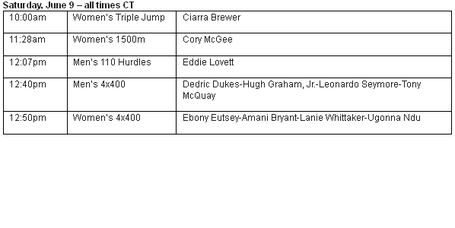 As for either Gators team winning a national championship, I just can't see it happening. If the men's team had been at full strength: Jeff Demps in the 100 meter dash, Gray Horn in the decathlon, the 4x100 meter relay team had qualified and other athletes like Stipe Zunic and Dendy had performed to their expectations, I'd be thinking championship all day long.

They still have a chance though it is a small one. They are going to need to pretty much sweep their remaining two events to get near the total points expected to win the championship. There are seven events remaining and the men can earn twenty points. Last year the Gators had fifty-three points and finished third.

The women's team has no shot at the team championship as the best they can finish is third.

All the action begins today at 11:00 a.m. ET and ESPNU will be televising the action live from the beginning until the conclusion of the events (expected to be around 1:00 p.m. ET). ESPN3 will also be airing the action live for those who won't be able to watch it on ESPNU and Flash Results will once again be posting the results up-to-the-second on their website.