Last year, we tried 50 For 50, and got halfway done before things cropped up. This year, Alligator Army is coming back with 100 For 100, with 100 articles in the 100 days leading up to the first Florida Gators football game of the 2012 season, and will run down storylines, profile players, examine history, and make some predictions, possibly all haphazardly. The only thing we can promise is that each day's entry will bring us all one step closer to "Herrrrrrrrre ... come the Gators!"

There are 47 days until Florida's September 1 opener with Bowling Green. There are 82 entries left in the 100 For 100 series. Will we get there?

Florida's got more than a few players on preseason college football awards watch lists, but no position group will have more players make a list than the linebacking corps, which is rife with talented upperclassmen. The 2012 Butkus Award watch list is so high on Florida linebackers, in fact, that it has four Gators on it — including one player who doesn't even go to Florida! 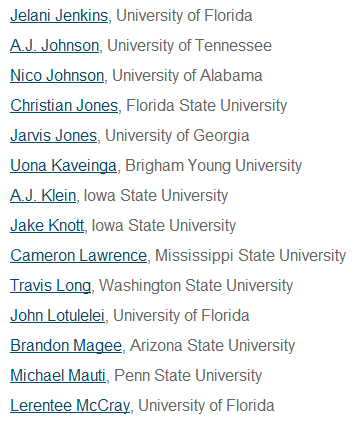 Yes, that's a screencap from the official Butkus Award site, and yes, Jon Bostic, Jelani Jenkins, and Lerentee McCray are all legitimately members of the watch list, giving Florida a tie for the most players on the list of any team in the country with Stanford. But John Loutuleilei is obviously not a Gator; he's a UNLV senior who somehow ended up getting listed under the Florida line.

In any case, Florida's linebacking corps is, by this metric, the "best" in America, and the best of an SEC that lards the watch list with 16 of its 51 names. If you watch Florida play this year, you'll see a fair number of those players, too: the Gators play three games with teams (Texas A&M, Georgia, and Florida State) who have two Butkus watch list members each.