Share All sharing options for: "Stephen Alli" "Pours Chocolate Syrup On Himself", Trey Burton Instagrams It

Beneath these words is what seems for all the world to be a picture of Florida wide receiver Stephen Alli apparently pouring chocolate syrup on himself while wearing a du-rag and sunglasses and taking a picture of himself. Trey Burton posted it to Instagram. Sometimes, the ledes write themselves. 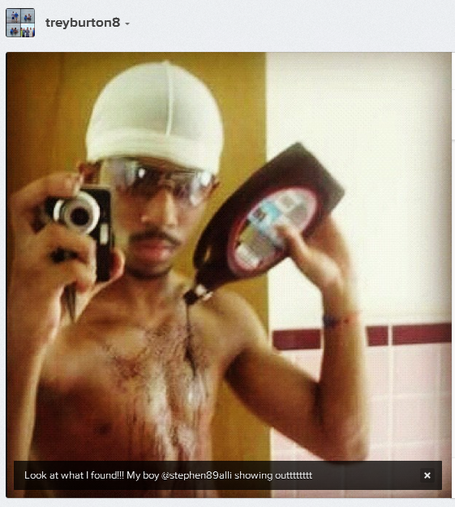 Alas, it's better when those ledes that write themselves are about things that actually happened. This picture's pretty funny, but it's most certainly not Alli; it's actually an old Internet picture of dubious origin that pops up every so often, and so this is Trey pranking someone.

Alli's always impressed me as a Gator with a great sense of humor — he really went after dancing to "Party Rock Anthem" on kick coverage last season, and his own Instagram pictures are pretty funny — so I'm pretty sure he will take this in stride, and/or prank Burton back harder.

As for Burton: His Twitter bio reads, in part, "I love to laugh ! I do what I do for an #AudienceOfOne!!" Posting pictures on Instagram to make fun of friends is also something done for an audience of one, I guess.