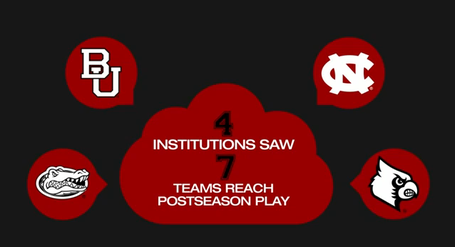 Baylor won one in 2011-12, in women's basketball. North Carolina won one in men's soccer. And Florida won three, in other non-"Elite Eight" sports: Women's tennis, and men's indoor and outdoor track.

Oh, and the only sport Florida didn't get to the NCAA postseason in, among those eight? Men's soccer. Because Florida doesn't have men's soccer.

Enjoy being good enough to get to the postseason in a lot of events, Louisville. It ain't the same as being elite enough to compete for championships in them, but it's something.