Every couple of years it seems that there is a new type of statistic that emerges that is supposed to change how sports are looked at. Take baseball and sabermetrics for example. Sabermetrics has been around for just over a decade and nearly half the teams in Major League Baseball have at least one full-time sabermetric expert in their front office.

As far as football is concerned, Bill Connelly and others are doing wonderful things when it comes to football and advanced statistics. Connelly’s blog here on the SB Nation network, Football Study Hall, is rapidly becoming a leader in that regard. And it should be. It’s high quality work that deserves nothing but praise.

However, this post is mainly to introduce you to the wonderful world of win shares — and not the kind from advanced stats.

Some of the leading college football blogs on the SBN network (and elsewhere) talk in great detail about win shares throughout the season. Tomahawk Nation is a notable win shares blog and they've gotten some great feedback because of it. The Bull Gator even toyed with the idea last year as well.

Basically, there are two (for the most part) ways to calculate win shares and come up with the total: decimal points and straight numbers to one-hundred. Some people like to use percentages (out of one-hundred) but I've yet to see an advantage using those ratios.

For me personally, using the decimal points is the easiest to use and it is the most effective. What you're going to want to do is look at a 2012 Florida Gators season schedule and assign a number 0.00 to 1.00 to each game based on how comfortable you are in a prospective Gators victory.

Since the Gators open the season at home against Bowling Green and I'm fully confident in a Gators victory, I would assign a value of 1.00 for that game.

Next, the Gators play at Texas A&M and I'm somewhat confident of a Gators victory so I'll assign a value of 0.55 for that game.

For the third game, the Gators travel to Knoxville to take on the Volunteers. I'm more confident in that game than Texas A&M, so I'll go with a 0.70 value.

Then you'd just go on to the next game and the next one and so on. Once you've done the entire season you just add up your total numbers and there is your win shares for the season. Obviously there is some (okay, a little) math involved and some people take it to an entire different level but you've gotten the idea by now I'm sure. 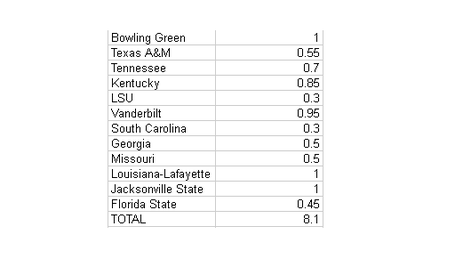 Now that it's posted, I really like how that turned out. Though I think I might be a little high on the Tennessee game, but nevertheless I'll go on record with that for now.

What this all boils down to is that I'm thinking the Gators are going to get eight wins this year. Three guarantees, one basically a given and three other heavily favored games. That's seven games and then an upset out of LSU, South Carolina, Georgia, Missouri or Florida State. Obviously when looking at my numbers you'd notice that I think the eight win is more likely to come from Georgia or Missouri than the other three.