If you thought that the fiefdom of Gator Nation set up in London for the 2012 Olympics was going to be quiet, Ryan Lochte and Abby Wambach dispelled that notion with alacrity on Saturday. And Elizabeth Beisel did something she's never done on a great first day for the Gators.

Lochte came into the men's 400 meters individual medley as the heavy favorite in the event, and he should have been. At the 2011 World Championships, Lochte thrashed the competition, beating American Tyler Clary by more than four seconds in the most lopsided men's final of the event. Only world record-holder Michael Phelps choosing to swim in the event after not even attempting it at the World Championships should have even given Lochte pause. With another dominant swim on Saturday, Lochte showed he didn't even need to worry.

Lochte took the event in a blazing 4:05.18, faster than pretty much every time ever recorded in the event save Phelps' ridiculous 4:03.84 in Beijing, and by more than 3.5 seconds, the largest margin of victory in the event in Olympic history. Just look at the chasm between Lochte and the rest of the field here, just moments before he touched the wall to finish. 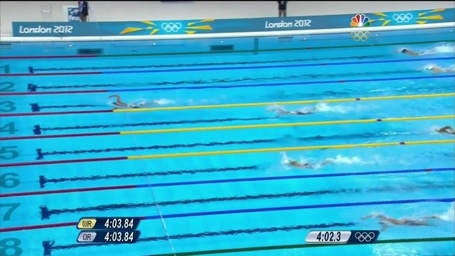 Phelps, meanwhile, finished fourth, making Saturday's race his first individual Olympic final without a gold medal around his neck for the first time since 2004 and his first Olympic final off the podium since 2000.

Is it the changing of the guard observers are expecting from Lochte and Phelps in London? Not quite: Phelps was never considered a favorite in the 400m IM, and still has most of his best events to go, though this performance wasn't promising. But it's at least a good start for Lochte, the Gator — and swimmer — most likely to dominate the water across the pond. Bring on the reign of bling, #Jeah?

Beisel breaks through for first medal

Beisel had been one of America's finest female swimmers for years. But she had never earned an Olympic medal, leaving a hole at the top of an impressive resume put together by the end of her sophomore year and before she had even turned 20.

That hole's not there anymore. Beisel earned the silver medal in the women's 400 meters IM on Saturday, coming in second to a world record-setting time from China's 16-year-old Shiwen Ye, but the loss isn't exactly a disappointment.

Actually, it's a strong start for a swimmer who could win a few more medals in London, and proof that she's improving: Beisel swam a personal best in Omaha at the U.S. Olympic Trials, then cut some time from it in her preliminary heat on Saturday morning, then swam even faster in the afternoon. Ye just swam the best race of her life, and Beisel's best wasn't quite enough.

That's okay: The best race of Elizabeth Beisel's life is surely yet to come.

Wambach gets sucker-punched, wallops back

Note to anyone tasked with picking one game from her career to show how tough Abby Wambach is: Saturday's 3-0 win over Colombia is the right choice.

Wambach didn't score until the second half, when the U.S. broke open the game late en route to its comfortable victory, but she earned her goal, at least karmically, after taking a vicious punch to the eye from Colombia's Lady Andrade:

In true Wambach fashion, she stayed down because she was hurt, not to milk a non-injury. She got back up and kept playing, despite insinuating to USA TODAY's Robert Klemko that she might have handled things differently in the street. And then she scored in the second half, and held her hand up to her eye in celebration, responding to the punch and showing the world she still had her eye on the prize.

That, there, is a significant amount of swag. It's also proof that messing with Abby Wambach, the baddest woman in soccer, is a stupendously dumb idea.

Only one Gators swimmer failed to get a medal in a final on Saturday. Conor Dwyer finished fifth in the 400 meters freestyle, well behind China's Sun Yang. Peter Vanderkaay, who has trained with Olympic and Florida coach Gregg Troy in Gainesville for the past couple of years, took bronze, but he's only an honorary, adopted Gator.

Azania Stewart, Florida's only athlete on the court, started and played well for Great Britain in her first Olympic action on Saturday, scoring eight points and grabbing a rebound while drawing five fouls. Unfortunately, her squad lost to Australia, 74-58, and is going to have some difficulty advancing from Group B to the medal round. (Also, Stewart's "club" is listed as "Florida University," which is not a real thing, no matter how much The-Dream might think so.)

Here's the cool stat of the day: If the University of Florida were its own country, it would currently be alone in seventh in the overall Olympic medal count.

If you like this stat, feel free to share it, but be careful, because it won't be true for long — when I tweeted it, back when I thought Florida was fifth, I apparently neglected to consider the men's 400 freestyle, which pushed Japan past the mythical Gator Nation and into a three-way tie for fourth. I'm ranking by total medals in that last sentence; Only Gators is not, which is why this graphic showing UF in sixth works, too. However, I did get the other note sort of right: If Florida's medals weren't counted in the U.S.'s medals, at that point, Gator Nation would have been fifth, and ahead of the United States as a whole.

On both stats, a mea culpa is necessary.

Those stats will likely not be true, or its equivalents that flattering, after today, but Lochte won the U.S.'s first gold, and Beisel its first individual silver. And there's a strong argument that, for American viewers, Gators ruled the day at the Olympics.

Savor that, Gator Nation. It doesn't get much better than this.