Those of you familiar with Ja'Juan Story's story certainly know that he's the guy who, while a Florida player, told a reporter that his pregame ritual was to "doodoo and listen to Katy Perry." I am happy to report that while Story's time at Florida is done — he has transferred to TCU — his time as one of the leaders of the Katy Perry Fan Club is certainly not. Here is his Facebook cover photo of Ms. Perry, with some select comments from him: 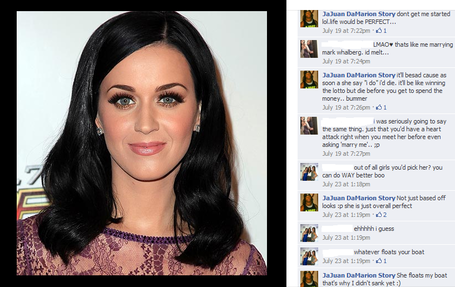 In case you can't read those comments, click to embiggen. Here's what his Facebook page looks like with the cover photo, and here's all of what he said on that photo:

(In response to "Only you"): "Good no one else should have her lol"

"it'll besad cause as soon a she say "i do" i'd die. it'll be like winning the lotto but die before you get to spend the money.. bummer"

(In response to "Of all girls, her?"): "Not just based off looks :p she is just overall perfect"

(In response to "Whatever floats your boat"): "She floats my boat that's why I didn't sank yet :)"

In conclusion, Ja'Juan Story remains committed to his sincere defense of Katy Perry, and thus remains one of my favorite athletes in life. I wish him the best at TCU, even though I'm resigning myself to the fact that I will be playing this song a lot if he succeeds there.