Florida Vs. Texas A&M, Theater Of Operations: Reviewing The Gators' Defense Against The Aggies

Share All sharing options for: Florida Vs. Texas A&M, Theater Of Operations: Reviewing The Gators' Defense Against The Aggies

It was a tale of two halves.

The Florida Gators defense shut out the Texas A&M Aggies offense during the second half of last Saturday's tilt in College Station by allowing zero points, 65 total yards and 2.8 yards per play. That's the good news.

In the first half however, the vaunted (yes, vaunted) Gators defense struggled to figure out the pace of the Aggie offense and the Aggies took full advantage. They outscored the Gators 17-7, had close to 300 yards of total offense and were averaging over five yards per play.

Aggies head coach Kevin Sumlin, who came over from the Houston Cougars after last season, did a great job in executing his offensive game plan in the first half. And he did it with a redshirt freshman at quarterback, too.

But as the game wore on, Will Muschamp and company had other ideas. 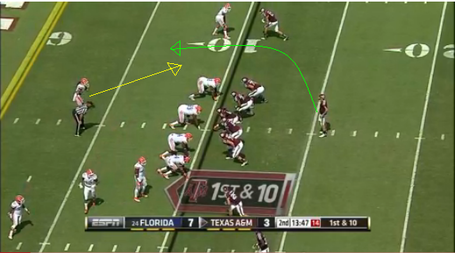 Remember last year when Evans took more bad angles than a broken protractor? Yeah, apparently all the progress taken in the Bowling Green game last week was for naught. 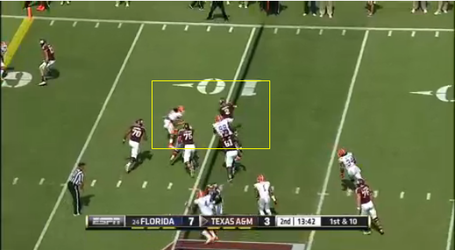 Evans takes the inside route while Manziel takes the outside. 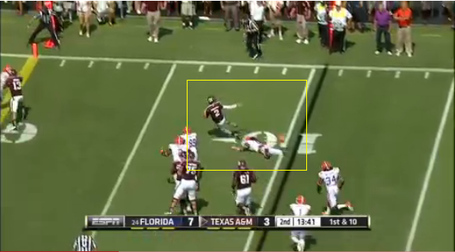 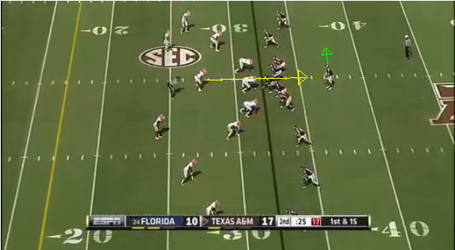 On this play, Taylor is just going to come in on a linebacker blitz. The Aggies' left guard just kind of stands there like a poor man's Jim Valvano. 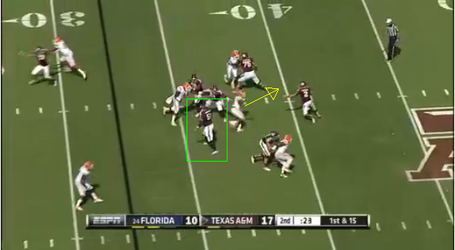 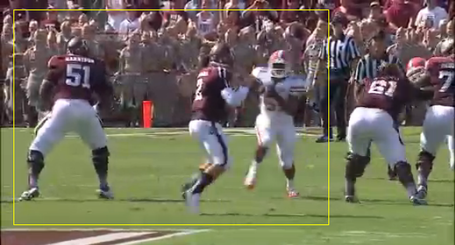 You can see that No. 51 for the Aggies doesn't pick up Taylor, who I'm guessing was more than happy to be obliged. There was definitely some miscommunication by the Aggie offensive line and it cost them dearly.

Since Ronald Powell is out (likely for the season?) for the foreseeable future, McCray has been one of the players chosen to quasi-fill his role. On this play, McCray is lined up at defensive end. 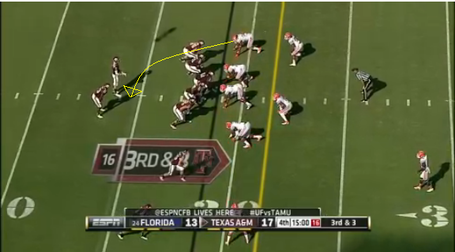 McCray will easily beat the left tackle on this play, and, as a result the Aggies will be forced to punt. This sack was one of the biggest and most important plays of the game. 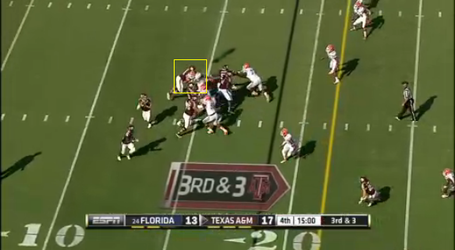 McCray basically just comes on a bull rush. It takes him a solid second or two to fight off the left guard, but after that nobody picks him up. 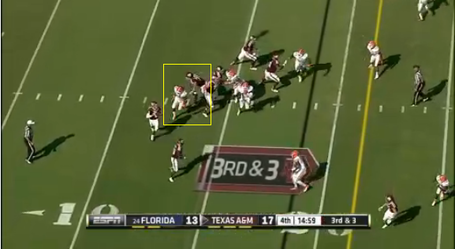 Of course, a little speed never hurt anyone.

The Gators defense is going to need to repeat their second half performance this Saturday in Knoxville against the Tennessee Volunteers. The Vols can throw it around a little bit, and the secondary for the Gators will be tested in a big way.