Florida Vs. Tennessee, Theater Of Operations: How The Gators Ran Over The Vols

Share All sharing options for: Florida Vs. Tennessee, Theater Of Operations: How The Gators Ran Over The Vols

The Florida Gators continued their hot start to the season on Saturday against the Tennessee Volunteers with another strong performance running the football. Trey Burton, Jeff Driskel and Mike Gillislee each rushed for over 80 yards in helping the Gators continue a trend: Whomever runs better in the Florida-Tennessee rivalry wins.

What are we up to now? 21 of the last 23 times, the team that has rushed the ball for more yards has won the game. And the Gators ended up with 336 yards as a team and the Vols had 83.

Gillislee led the Gators with 115 yards on 15 carries, Burton had 91 yards on three carries and Driskel added 81 yards on eight carries. Burton was the lone member of the trio to score a touchdown -- he had two of them -- but each player had a long of nearly 30 yards.

Since Andy has already covered the video of Burton's 80-yard touchdown run in the third quarter that put the Gators ahead for good, we'll go ahead and break it down for you, along with the usual highlights. 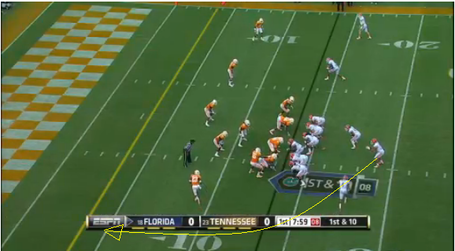 Burton is just going to run a zone read option type of play here. You can see that Andre Debose is running across the formation, and he'll get first chance at the handoff but Burton will decide to keep it for himself.

Debose running across the formation also accomplishes something else: It draws the cornerback away from the short side of the field, which creates a lot of open space. 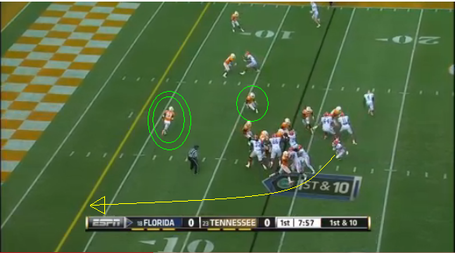 After Burton decides to keep the ball, you'll notice that right in front of him is Hunter Joyer, who is trying to clear the lane. Also, the cornerback (double green circle) is caught off guard as he still isn't sure who has the football. The linebacker (single green circle) does, but he's too far away to matter. 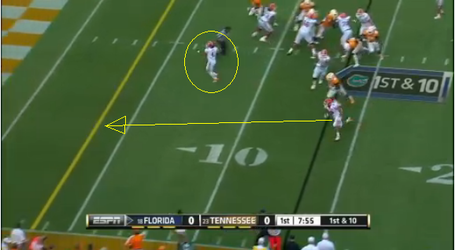 Joyer (yellow circle) has no one to block, and is instead doing his best Jim Valvano impression, while Burton beats the defender to the edge and has an easy 12-yard jog to the end zone for the touchdown.

I know this is the play that everyone is waiting for. I just hope that I'll be able to do it justice. 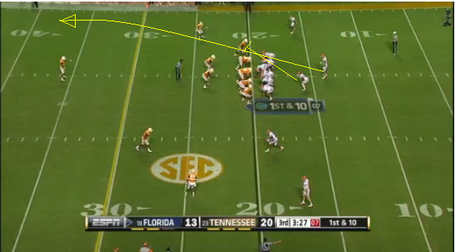 This play is the same basic design as the play profiled above. Burton will follow the lead block of Joyer, who creates the hole, and then Burton does the rest. 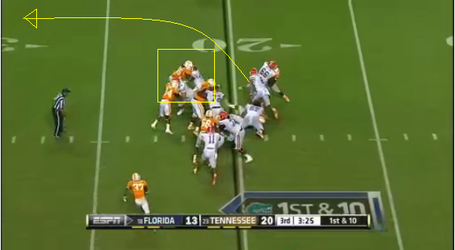 Joyer (yellow square) and the rest of the offensive line do a great job of creating the running lane. Burton does have to high-step to avoid getting tripped, but other than that, the run is smooth. 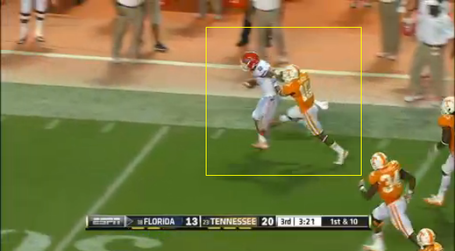 Further along in the play, Burton gives a defender a stiff arm as he avoids the tackle. Speed (which you can't teach) and strength (which you can adjust) are the names of the game on this play. 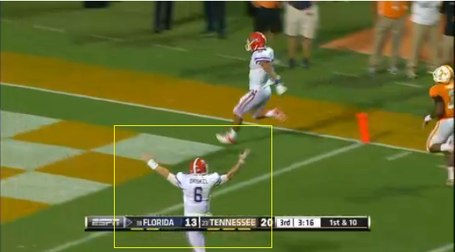 Burton was in a full sprint. But look who kept up with him the throughout the entire play! That's right. 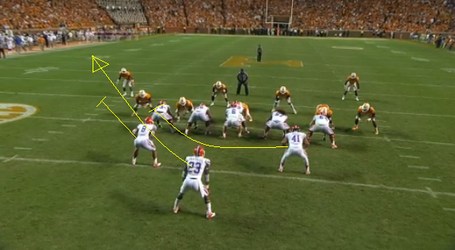 Joyer is once again going to provide the lead block on the inside, Burton is going to help outside, and the offensive line will do another fantastic job clearing a lane. 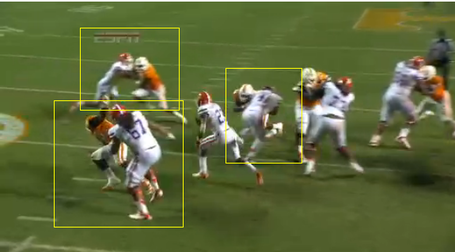 Jon Halapio (No. 67) has pulled over from his right guard spot to help out on the play. You can see that Burton (top yellow circle) and Joyer (right yellow circle) have both found their men and are providing good blocks. 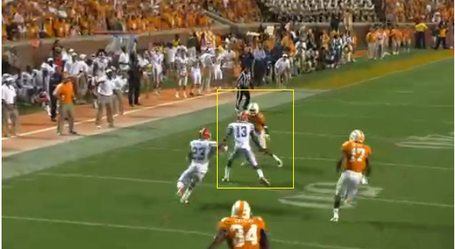 Latroy Pittman was even involved in the blocking downfield. His block wasn't the greatest, but he did screen the defender for a bit, which allowed Gillislee to pick up an extra 10 yards or so.

Once again, the Gators did a great job controlling the line of scrimmage. We'll have more on the defensive side of the ball tomorrow morning or later tonight, but the fact remains that great teams are built from the lines out to the sidelines.

If the Gators can continue their offensive line play and Xavier Nixon keeps his helmet on, the Gators with Gillislee leading the way should continue to run the ball a la Ciatrick Fason's SEC-leading campaign in 2004.