Florida Vs. Tennessee, Theater Of Operations: Reviewing The Gators' Defense Against The Vols

Share All sharing options for: Florida Vs. Tennessee, Theater Of Operations: Reviewing The Gators' Defense Against The Vols

Once again, it was a tale of two halves.

For the second consecutive Southeastern Conference game, the Florida Gators proved to be the dominant team in the second half. The only difference between the Gators' game against the Tennessee Volunteers and the Texas A&M Aggies was the six points the Vols scored early in the third quarter.

But let's be honest for a moment here: did that Vols touchdown even matter?

We've already talked about some of the reasons why it didn't matter (for example: Jeff Driskel's development as a quarterback, Mike Gillislee, Trey Burton and Hunter Joyer in the running game), but let's look at one final reason.

On a day/night in which Tyler Bray wasn't at his best, the Gators defense took advantage. 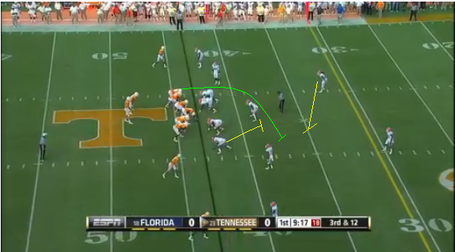 While Josh Evans has the main coverage over the top, McCray is going to cover the underneath part of the route. Bray doesn't see him at all. 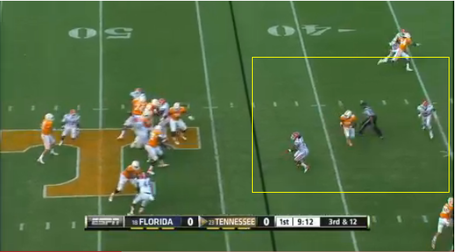 Perfect coverage on the play. You can also see that Bray was a little rushed in the throw as there is one defender in the backfield. 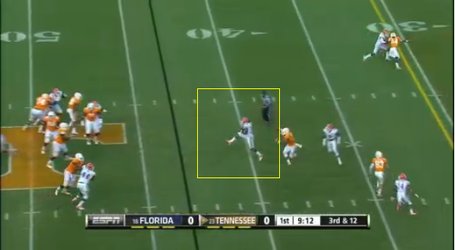 A very easy interception. McCray would end up returning the ball 25-yards the other way and set up the Gators' first touchdown.

Play No. 2: The defense gives up a touchdown to Mychal Rivera

Even though I try to only look at the positives when producing a Theater of Operations, sometimes it just doesn't work out that way. Like this play, for example. 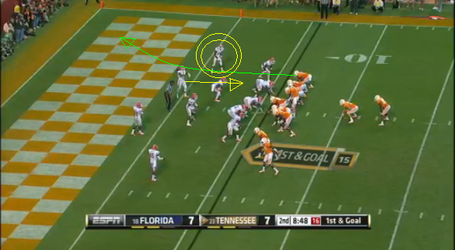 Rivera is going to run a little crossing route to the corner of the endzone, but he is so wide open that the ball gets to him before he gets to the corner.

Why is he so wide open? I'm glad you asked. Jaylen Watkins (double yellow circle) bites on the same fake that Josh Evans bites on. Though in Evans' case, he wasn't asked to defend the pass first. 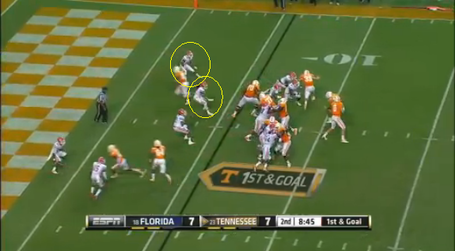 Just after the fake, you can see that both Watkins and Evans are on their heels. That of course allows for Rivera to easily get free in the end zone. 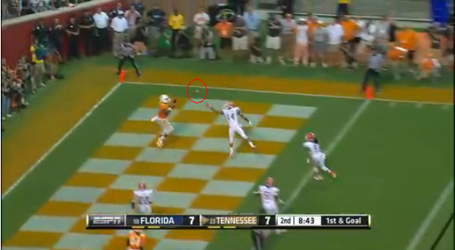 Watkins does get a hand up to try to deflect the ball, but he's too far up. Touchdown, Tennessee.

(I'm also fairly sure I've heard a song once before titled "Touchdown, Tennessee" and I think it was done by Kenny Chesney. Like Urban Meyer pictures, we should think of banning Chesney's name here at Alligator Army. Unless of course it's a reference to his songs from say, 1993-2004.) 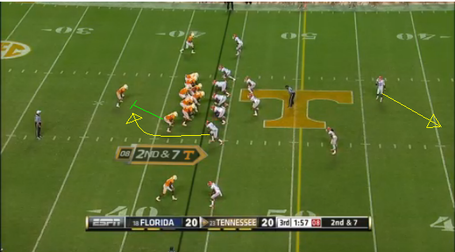 Elam will get the interception, but watch the bottom of the screen. McCray beats his block and gets to Bray just as he is releasing the ball. 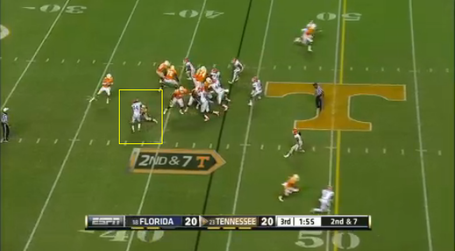 This is why McCray was switched from linebacker to defensive end. He's just too fast and strong. He's already got leverage on the right tackle as well. You'll also notice Evans (just below the "T") coming in again. He was playing run-first a lot of the times. 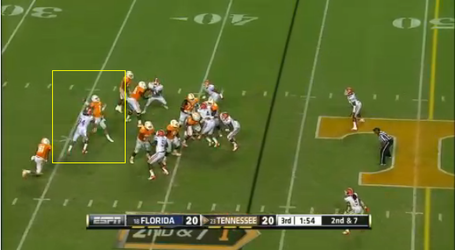 It's impossible to get off a good throw when someone is on you like McCray is here. Bray has no chance to step up into his throw. 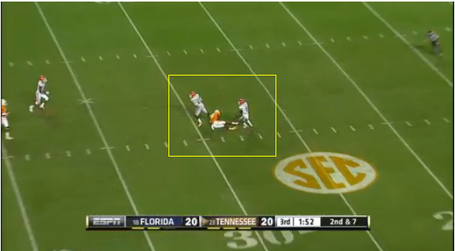 Bray ends up lobbing the ball into double coverage and Elam ends up with the interception. One thing to note though, is that Marcus Roberson pretty much tackles the receiver before Elam catches the ball. Should that have been pass interference? I'm not sure. It was pretty close and officials usually give a "tie" to the offense.

If the Gators defense keeps playing like this in the second half of games and the offense can keep it close until then, the Gators are going to be tough to beat. Unless of course you're an LSU or someone like that.

Up next the Gators get Kentucky at 12:21 (presumably on the SEC Network), expect the next Theater of Operations to be up on Friday morning and we'll take a look at either Kentucky quarterback Maxwell Smith. Surprisingly, Kentucky has the No. 13 overall passing attack in the country.

But then again, they just lost to Western Kentucky so it probably won't matter. And no, I'm not looking ahead to LSU.