For those of you who are new to the site, welcome. Theater of Operations is where you will find video breakdowns (both previews and reviews) on the Florida Gators and their opponents for the week. For those of you who were here last year, you already know the drill.

Florida Gators fans finally got to see Mike Gillislee start and finish an entire game on Saturday against Bowling Green. It's just a shame that it only took three years (four if you count this year, I guess) to accomplish that feat. It also appears that we were right all along: Gillislee can handle that rock.

Before we get to the video breakdown, let's take a look at how the running backs performed yesterday against Bowling Green from a purely statistical standpoint. Gillislee wasn't the only running back (or the only position player) who saw action against the Falcons.

Aside from the fact that Gillislee had a career day, it's very apparent that he will be the focal point of the Gators' running game this season. His 24 carries were more than half of the total team carries. Yeah, I'd say that Gillislee is finally getting his due.

Video breakdown is, as always, after the jump.

As the play develops, you'll see Gillislee run to the outside of the left tackle and follow the block of Hunter Joyer and Jon Halapio (who will pull across the offensive line). 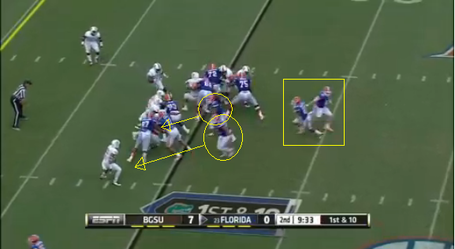 As Gillislee receives the handoff, you can see that both Joyer (bottom circle) and Halapio (top circle) are heading out in front to help block. Joyer has his sights set on sophomore defensive back Ryland Ward. 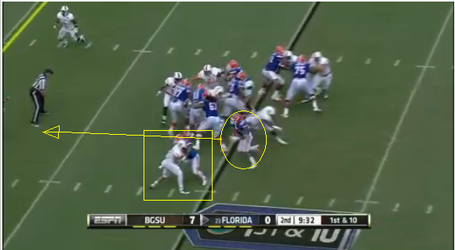 As Gillislee (yellow circle) prepares to hit the hole, you can see that Joyer has done an excellent job of sealing off the edge (yellow square) and that Halapio (not circled, above Gillislee, with the hair) has provided extra help on the inside edge.

Also note that Gillislee has made one guy miss by performing a small cut to his left. 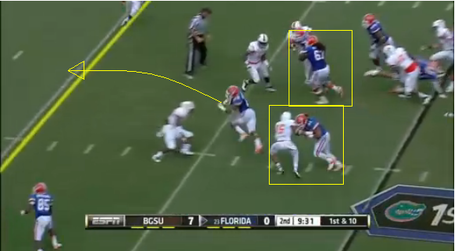 Gillislee does have to make another man miss, this time with a quick cut to his right. Joyer and Halapio (yellow squares) are continuing with their blocks.

The rest of the play is all about Gillislee using his speed to outrun the Falcons' secondary. He does this, and nets the first score of the season for the Gators.

There are quite a few similarities between this play and the one profiled above. Gillislee will once again follow the lead block by Joyer, perform a cut to his right and then use his speed to find the endzone. 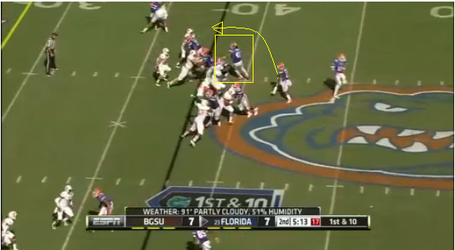 As Joyer (yellow square) heads out to seal off the edge, Gillislee realizes that there is nothing up the middle and decides to follow Joyer to the outside. 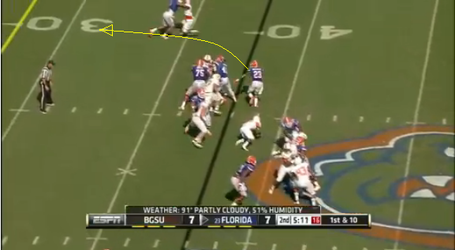 Gillislee at this point has caught up with Joyer (not circled, to the left of Gillislee) who is assisting in the sealing off of the edge.

Also note the outstanding block by Jordan Reed at the top of the screen.

If you go back to the first screen capture from this play you'll notice that the Falcons played five men on the line and two linebackers. There was also a blitzing safety. Even though I'm horrible at math, by counting the two men on the other side of the field, I know that all Gillislee has to do is beat one man and he's gone.

Where is that man, you ask? 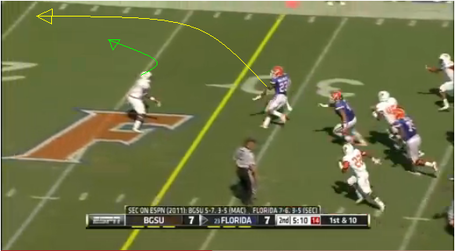 There he is! Gillislee is just going to perform a small, quick cut to his right and then use his speed to outrun him.

Gillislee might not be the fastest running back in college football, but he's more than fast enough on this play. And that's all that matters.

There is no way that this play is as successful as it turns out to be if Frankie Hammond Jr. doesn't get off a great block down the field. 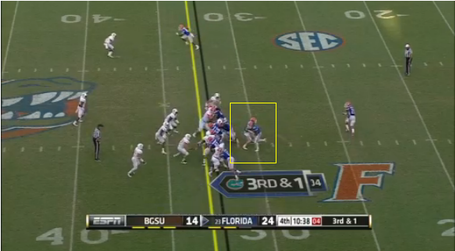 But it starts with a great fake to Joyer. 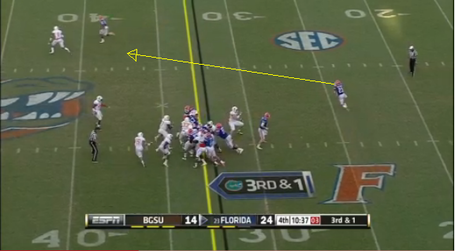 The pitch to Gillislee finds him with nothing but green in front of him for about 15 yards. No defenders are even within 10 yards of him there. 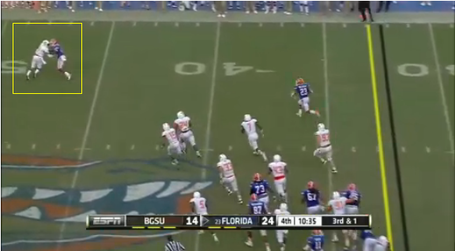 You know what, forget about Gillislee for the remainder of this play. We all know what he did. Let's instead focus on the guy blocked by Hammond ends up. 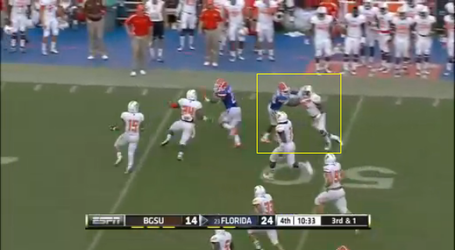 Even though Gillislee has gone by him, Hammond continues with the block and turns his man around. It's an outstanding play by Hammond: There is no doubt that his block allowed Gillislee to gain an extra 15-20 yards at least.

All in all, it was a very good day on the ground for the one-dimensional Gators. As for the other dimension, well, we'll talk about that tomorrow morning.