That's how many times the Florida Gators have beaten the Kentucky Wildcats without a loss. It's a streak that dates back to November 15, 1986 and a 10-3 Kentucky win in Lexington. It's also the longest current winning streak against an opponent in the NCAA when the two teams meet every year.

Is this the year it ends?

If you ask me, the answer is no. I don't even really think that the Wildcats have much of a chance. But every now and then I have been known to be wrong when it comes to the Gators. Believe me, it's rare, but it does tend to happen from time to time.

The only way the Wildcats win tomorrow against is their passing game (and defense) steps up in a big way. And I mean big. Again, I don't think it will happen, but in my opinion it is their best chance. Maybe it's because the Wildcats have the No. 12 ranked passing attack in the country? I know, I was laughing as well when I first read that myself.

Probably because it seems to be about the only thing they have.

Aside from basketball of course. But that's second fiddle around these parts. 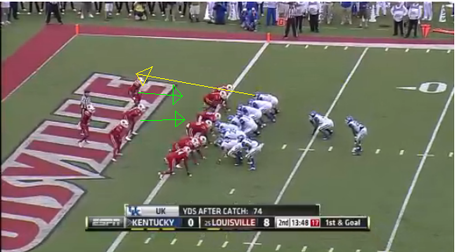 This play is oh, so simple. Robinson just runs into the end zone, the linebackers and safety are thinking run (so they cheat up) and Robinson just turns around and finds the ball. 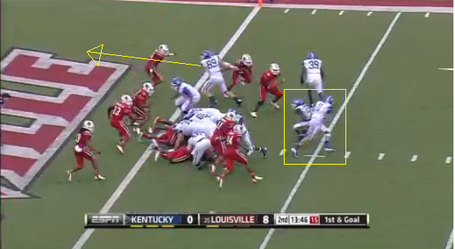 You can see that right after the play-action, the entire defense is caught off-guard. But what defense really wouldn't? The play happens from the 1-yard line. It would have taken an incredible linebacker to have foreseen that and kept up with Robinson. 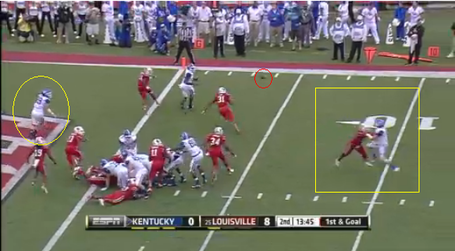 Somehow, I just don't see this play being all that successful against the Gators defense. Maybe that is just me though, but I doubt it. 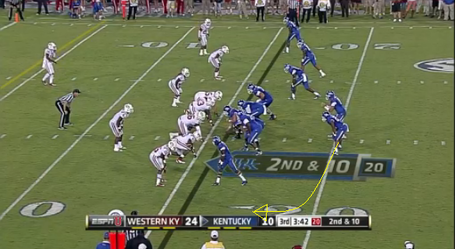 George is just going to be open in the flat. This is one of those plays where it seems like the team (any team) would be happy with just the first down. 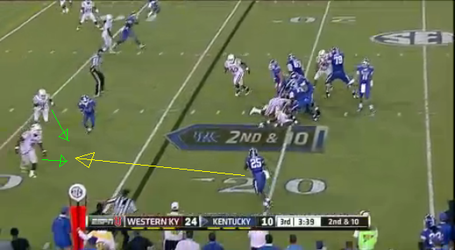 See what I mean? This just isn't going to happen against the Gators defense. Which of course begs another question... Why even show it?

Well, finding positive plays by the Kentucky offense is rather difficult. 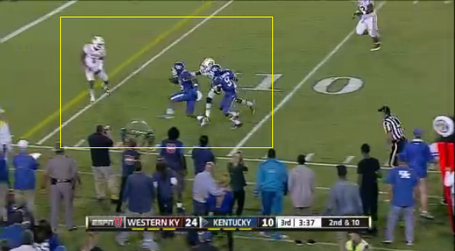 After making the first guy miss, George gets a block from the wide receiver and then will just run over the safety for a touchdown. 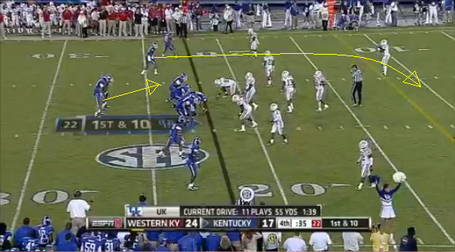 Sweat is going to run a quick crossing route over the middle of the field. Meanwhile, Smith in an effort to buy some time (somewhat due to pressure) is going to scramble forward near the line of scrimmage before throwing the ball. 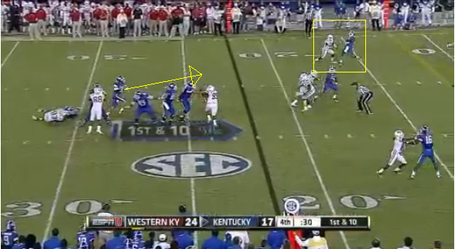 As Smith begins his move to the line of scrimmage, Sweat is bumped by the defender a bit. 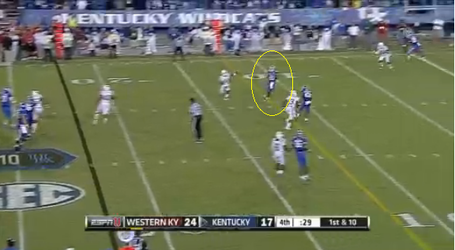 Smith ends up throwing a dart to Sweat and Sweat does the rest. It was a nice throw (in a little traffic) from on the run (though moving forward).

I still don't really see the Wildcats' offense causing problems for the Gators defense. Sure the Wildcats will probably connect on a play or two, it happens, but I don't think they'll connect on nearly enough to effect the outcome of the game. They might just delay (or better yet, garbage time it up) the inevitable. I even doubt they can or will do that.

Get ready to say hello to twenty-six.