Jeff Driskel has officially arrived, even though he threw his first interception on the season.

The Florida Gators' sophomore quarterback ended his day near the beginning of the 4th quarter after going 18-for-27 passing for 203 yards and a touchdown. He also added 50 yards on eight carries and a touchdown on the ground to lead the Gators offense in their 38-0 victory over the Kentucky Wildcats on Saturday afternoon.

Much like nearly all the Gators' recent victories over the Wildcats, this one was also over before halftime. And in this one, Driskel had a lot to do with it.

That interception, by the way, was a good thing. It takes that weight off his shoulders, much in the same way that a pick did to John Brantley last year.

Now, if we can get Driskel to start the game just a bit faster, we'll be all right. 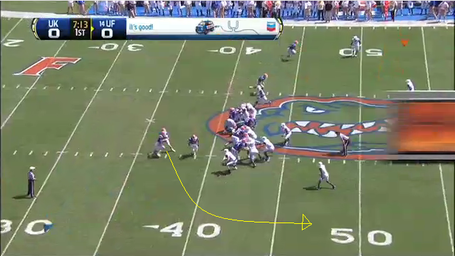 On this play, Driskel is going to fake the handoff to Mike Gillislee and then take off running to the right side of the field. The only thing to note here is that when Driskel runs or runs to pass, it's almost exclusively to the right side.

Much like a basketball player, I wonder what is going to happen when teams force him to go to his left. 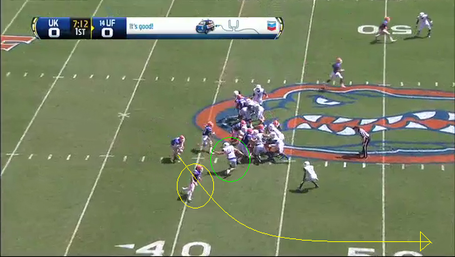 The fake to Gillislee draws the linebacker (green circle) in far enough that Driskel is able to get to the outside. The best part about the play is that, once again, he's got fullback Hunter Joyer (yellow circle) as the lead blocker. 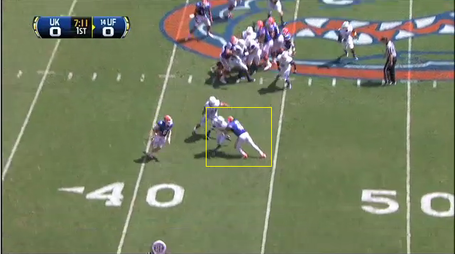 As usual, Joyer does his job. When does that man not? 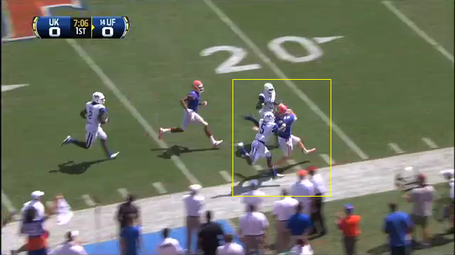 Face mask or horse collar? You can call the penalty however you like. Just pick one. It doesn't matter.

The referees chose to go with a face mask penalty for 10 yards, which I was fine with.

This play was big, mostly because it came on third down. Let's just say that third down hasn't been the Gators' forte thus far. 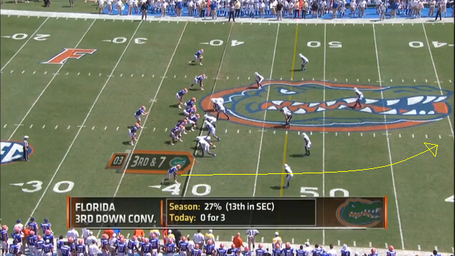 Hey, there's a visual reminder of Florida's struggles on third down!

A simple crossing route over the middle by Hammond is all it takes to convert on this play. The throw by Driskel is right on the money. Also, take a quick look at the amount of cushion the defensive back gives Hammond on the play. That's too much to give, even for these receivers. 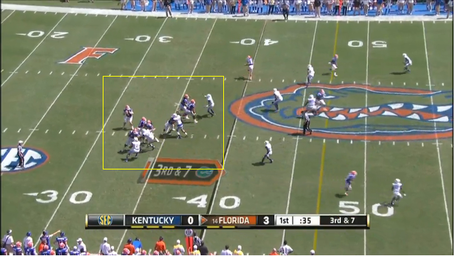 Even though Kentucky only rushed four and dropped seven back in coverage, the offensive line does a great job giving Driskel a nice pocket to work out of. 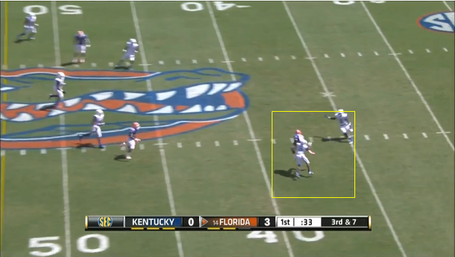 Hammond has what, maybe a yard on the defender, and another three or four on the safety? Driskel places the ball perfectly into that window, and the result is a long pass play for a Gators first down. 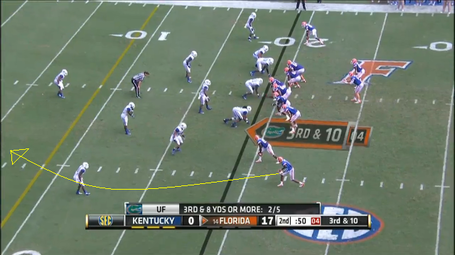 This play is almost identical to the one profiled above. Dunbar gets soft coverage, Driskel is given a nice pocket to operate out of, and the result is rather positive. 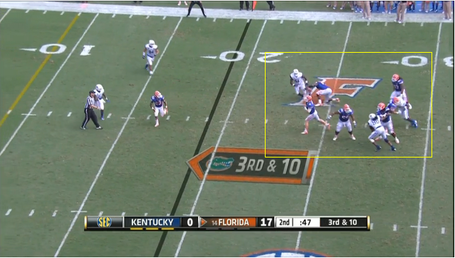 After Driskel takes a couple steps forward (not to really avoid pressure, but to buy some time), the pocket created by the offensive line still holds. 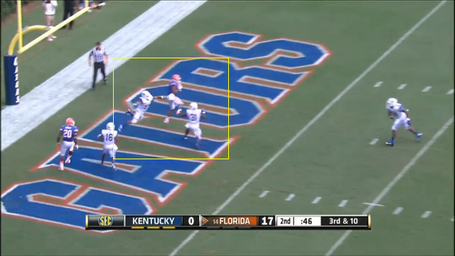 Look at Dunbar's location when he catches the ball. A perfect throw was needed and that's exactly what was made. Touchdown, Gators. Ballgame.

We could have covered another five or six plays (including three or four in which Driskel scrambles for an hour and completes a deep ball) but I'm fairly sure the message is already understood.

Driskel, who won the starting job over Jacoby Brissett in part because of what he can do with his legs, fits Brent Pease's offense much better now that Pease incorporates aspects of an option offense.

The Gators get yet another real test in two weeks when they face the LSU Tigers. I'm just glad that Tyrann Mathieu is no longer a member of the Tigers' defense. (The fact that he is a good player has nothing to do with it. It's his ridiculous nickname of "Honey Badger" that is the reason why. It's beyond stupid.)