For those of you who are new to the site, welcome. Theater of Operations is where you will find video breakdowns (both previews and reviews) on the Florida Gators and their opponents for the week. For those of you who were here last year, you already know the drill. Also note that due to some new rules set in place by higher ups, each play is limited to three screenshots... but I might be able to sneak in a fourth one every now and then.

It appears as if the "argument" over who should start at quarterback is over. In the off chance you missed it, Jeff Driskel started the game, played the entire first quarter (and then some) then was given the entire second half to showcase his talents. The other quarterback dueling for the starting job, Jacoby Brissett, didn't get much of a chance once the game got underway.

But nevertheless, we'll take a look at how they performed. You can take a quick look at the final numbers of the two here, though I should tell you in advance that they final numbers heavily favor Driskel.

As a result of that, I will admit right now that this breakdown leans heavily toward Driskel because well, he appears to be the guy moving forward. Right?

Play No. 1: Driskel runs out of bounds

Reading through your comments in the Rapid Recap following the game, I see that this play is one that everyone was attracted to the most, big supporter of Driskel or not. This play seemed to sum up both the positives and negatives of Driskel as a quarterback. 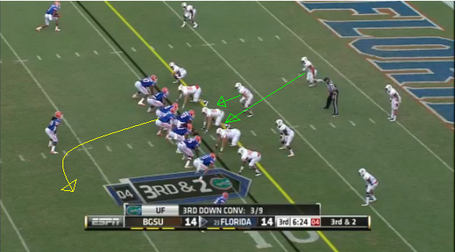 The Falcons defense is going to come with a blitz that sends a safety and a linebacker to the middle of the line and that pressure forces Driskel to the short side of the field in a scramble. I'm pretty sure that the play was a designed bootleg to the short side, but the pressure after the play fake to Matt Jones forces Driskel to put an extra kick into his giddy-up. 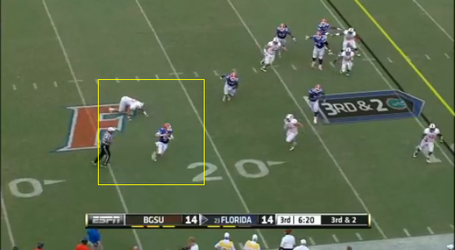 After avoiding the pressure from up the middle, Driskel looks down field to throw. 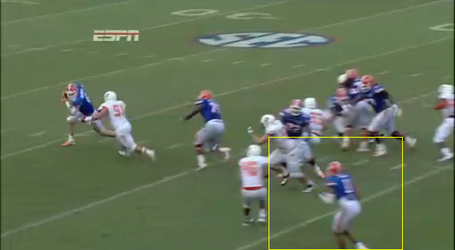 From another angle we can see that Jordan Reed was open, but at this present time it's impossible to throw it his way. In a few more steps or so, the situation is probably different.

Was Reed still open at the time of the second screen capture? Yes. They showed it on the replay a couple of times.

Remember what I said about growing pains... this is one of them. He'll learn to throw it away instead of taking a seven-yard self-sack, and he did that later in the game. In situations like this one, where the the game is tied, Driskel probably didn't want to press a rather difficult throw and have it intercepted. 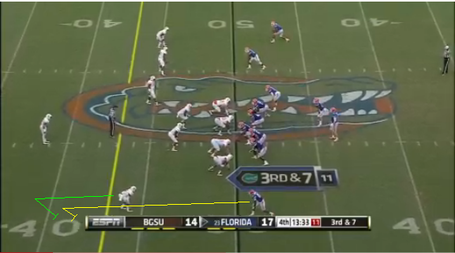 On a precise timing route, Hammond Jr. is just going to run a 10-yard curl. 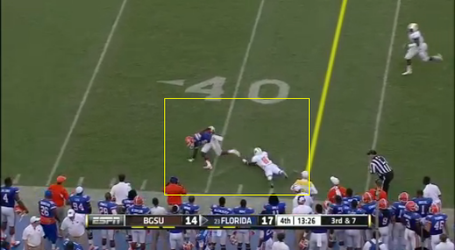 After a great throw by Driskel (remember, this route is all about timing), the rest of this play is all about Hammond as an individual. Oh, and speed. Let's not forget about speed. 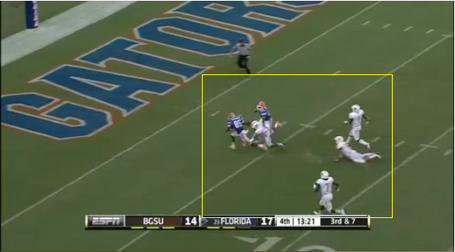 Hammond outruns four Falcon defenders on his way to the endzone.

It was obvious from the get-go that neither Brissett or Driskel were entirely ready to run this offense. Was the offense pretty vanilla? Yeah, it was. But a lot of that has to do with Muschamp trying to prove a point.

I fully expect for Driskel (or Brissett, but it looks like it is going to be Driskel) to get more and more comfortable as the season continues. Is he going to make mistakes? Sure. But as the season progresses, expect to see him not make blatantly errant throws, like the one he made to Quinton Dunbar ... which was followed by Dunbar going up to Brissett maybe no tell him that he'd rather have him throwing the ball.

No matter what was exactly said, there is no doubt that Brissett responded with something like "I got you."