Florida Vs. Bowling Green, Theater of Operations: Reviewing The Gators' Defense Against The Falcons

Share All sharing options for: Florida Vs. Bowling Green, Theater of Operations: Reviewing The Gators' Defense Against The Falcons

For those of you who are new to the site, welcome. Theater of Operations is where you will find video breakdowns (both previews and reviews) on the Florida Gators and their opponents for the week. For those of you who were here last year, you already know the drill. Also note that due to some new rules set in place by higher ups, each play is limited to three screenshots... but I might be able to sneak in a fourth one every now and then.

It is no secret to anyone who follows college football that the strength of the Florida Gators this season was going to be the defense. When everything is said and done, I still expect that to be the case. Even though the Gators gave up over 100-yards on the ground and over 200-yards through the air, things weren't all bad.

It does help that I've completely forgot about the twelve play, 89-yard touchdown drive that ate up more than five and a half minutes of the clock.

Okay, I lied. I haven't entirely forgot about that drive yet.

Now that we've got the bad news out of the way, let's move on to the good.

For one, Josh Evans has improved so much over last season that I'm not even sure if it's really the same guy in that uniform. His angles are better, his tackling is better, and he even looks twice as strong.

Speaking of strong, the defensive line looks to be very promising. Sharrif Floyd, Dante Fowler Jr., Dominique Easley and company appear to be on the verge of breaking out. The three of them combined for three tackles for loss and a sack. Throw in the linebacker duo (which we all knew would be good) of Jonathan Bostic and Jelani Jenkins who combined for eleven tackles including two for loss and you've got the makings of a pretty stout front seven.

Which is going to be huge when the Gators get to the SEC portion of their schedule.

Yeah, I'm not entirely sure how the 5'8", 178-pound Pettigrew managed to pull this off either. 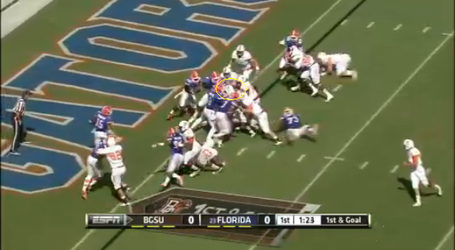 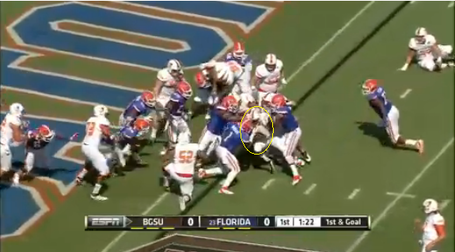 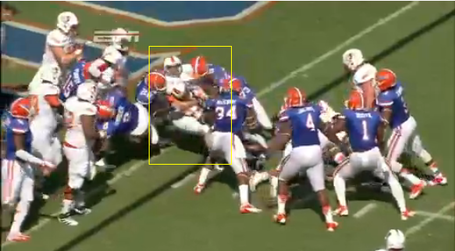 Even though the Falcon fullback grabs Pettigrew and bear hugs him into the end zone, I've still got no words. 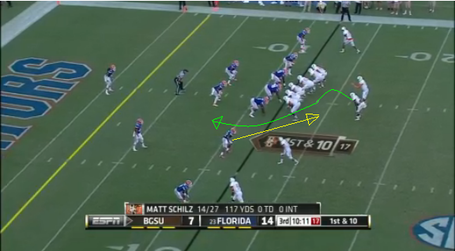 Samuel is going to run right at the gap (off a counter) that is created by the blitzing Matt Elam. 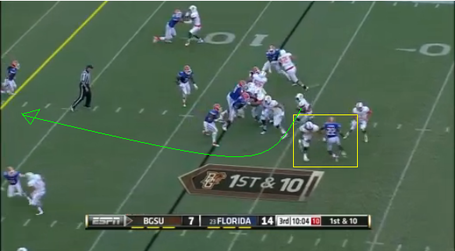 Once Elam is taken out of the play, the offensive line does the rest and clears a hole for Samuel to run through. I will admit though that while the running lane isn't the best, it's more than satisfactory. 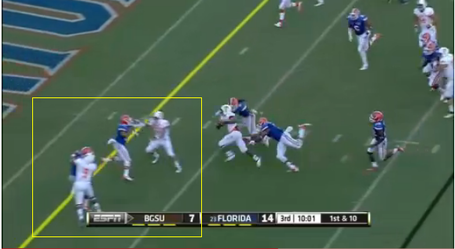 Samuel does get some great blocking near the end of his run.

Side note: The picture used in the heading is taken from about the moment this one was. It shows that both Evans and Jenkins were there, but were just unable to bring him down prior to crossing the goal line. 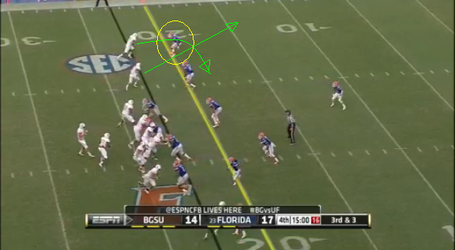 The Falcon receivers are going to try a little screen, bump and cross pattern route, but Roberson isn't fooled at all. If we were able to use more screenshots that point could be driven home more, but we'll settle for just one. 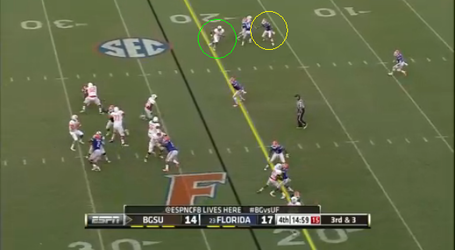 You can see here that Roberson is just shadowing the receiver. At best for the Gators defense, this play should result in a first down for the Falcons, with yardage limited. Roberson would have likely tackled him at around the 17-yard line.

Then again, the Gators struggled with tackling all game Saturday, so who really knows? 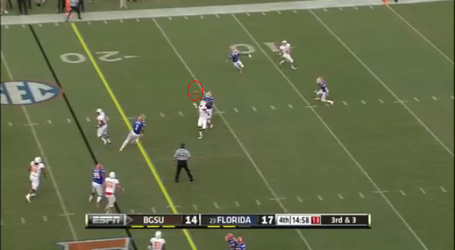 But you know what happened: The drop, the interception and the 31-yard return that followed.

I'm not really sure who really deserves the credit for this sack, but I can say that Easley was given full credit for it because he was the last defender to touch Johnson before he fell to the turf. It does appear that Johnson just fell because he had nowhere to go. 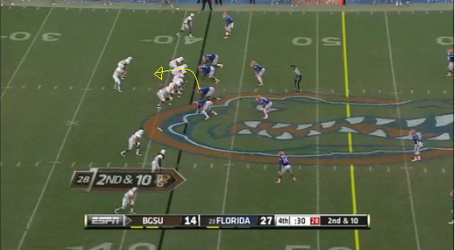 Easley is going to lineup over the right guard but after the ball is snapped he is going to slide over to the area in-between the center and left guard. 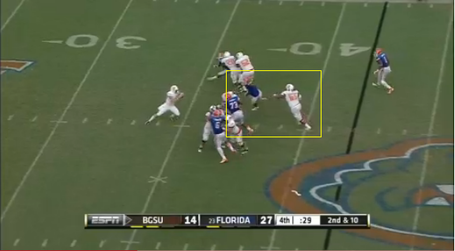 Easley was easily (ha!) able to move past the center and get to Johnson. 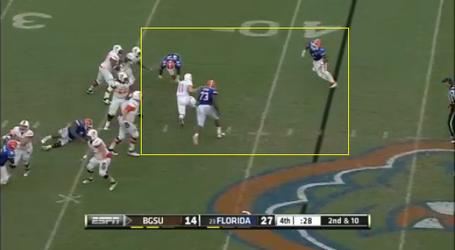 I know that some of you think that the defense underperformed (and those at Tomahawk Nation think that the Gators defense is overrated, as you'll see when you click here and here) but don't worry, the defense will be fine. Matt Elam and company will be ready to go when the Gators kickoff against the Aggies of Texas A&M this Saturday.

They pretty much have to.