Last season, the men won both the Indoor and Outdoor NCAA Championships and the women won the SEC Indoor crown. With some new faces this year, their goals are set even higher.

The Florida Gators track and field season begins today with the Crimson Tide Indoor Opener that is (obviously) hosted by the University of Alabama in Tuscaloosa, Alabama. The one day meet, held at their CrossPlex Indoor Track complex, will provide the Gators with a great chance to see where they are as a program right out of the gate.

We know what these past Gators teams have done.

The Gators also didn't hold back when it came to the schedule. I'll let coach Mike Holloway explain:

"We are very excited about this year’s schedule," Holloway said. "The schedule gives us a chance to see some of the best competition in the country during the regular season, which is very important as we prepare for the championship season that starts with the SEC Championships.

"Indoors is more about running special times during the regular season and with the slate of meets we have on fast facilities, such as Arkansas, Nebraska, Virginia Tech and Washington, our student-athletes have a great opportunity to achieve the marks we will need to qualify for the NCAA Championships."

That last sentence is what it is all about. Championships. The Gators appear to be ready to go, with all engines firing. Let's hope that they have even greater success this year than last.

As for today, the Gators will share the track with some of the most successful teams over the past decade. Other than the Gators, the largely SEC field will include: Alabama, Auburn, Florida State, Georgia Tech, Hines Community College (men only), LSU, Mississippi State, Samford, USF and Southern Mississippi. Also, Texas and Tulane will compete on the women's side only.

The meet will begin at 12:00 p.m. ET and you can follow all the action at MileSplit or Roll Tide. The better of the two options will be MileSplit though, as it will post the results live and to the second.

As for the schedule of events, courtesy of GatorZone: 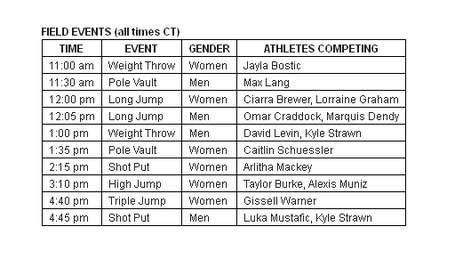 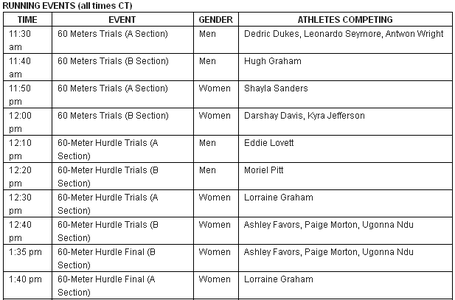 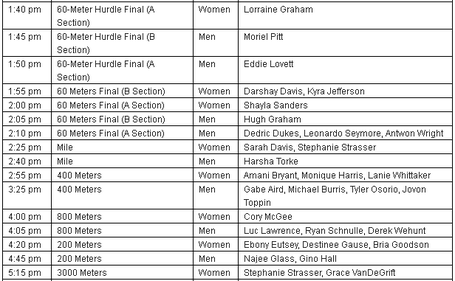