The peril of having recruits in your locker room is that they take pictures. And Roderick Johnson snapped and shared a shot of the new, slightly different Gators uniforms for 2013.

A keen-eyed observer has noticed that Florida commit Roderick Johnson has a new Twitter profile picture — one that might foretell new Gators uniforms for 2013. (Updates below: Florida has confirmed it will wear these uniforms in 2013.) 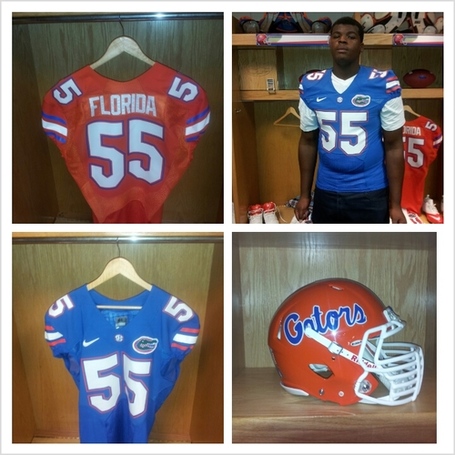 Forget the orange jersey for a moment, because Florida's worn orange alternates in the last two years and is clearly neither using them as the new regular jerseys or mothballing them just yet. Those numbers on the jersey tops in that picture are huge, much bigger than the ones on this year's Florida uniforms. (Photo credit: Kim Klement, USA TODAY SPORTS.) 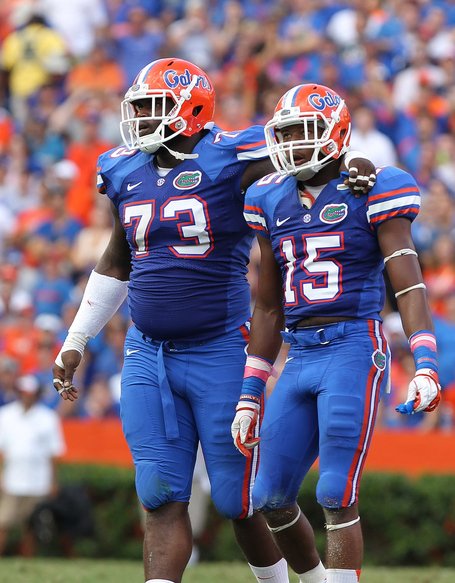 The ones Sharrif Floyd and Loucheiz Purifoy are wearing in that photo have large white numbers with orange stripes about a centimeter from the numbers. The blue one Johnson is wearing and showing have larger numbers with a much smaller blue stripe and a seemingly smaller orange stripe. They would be good as "TV numbers," ones that let the announcing crew see who made a tackle and so on, but I'm not sure about them aesthetically.

But, while Johnson's picture is likely from his official visit this weekend, and thus of Florida's actual locker room, that's not what makes me think these are real jerseys; the telling detail, in my eyes, is the "sweatbox" you can see on the picture in the upper right corner of Johnson's Pic Stitch work. That's a Nike design, and was new to the NFL's new Nike uniforms this year. If Nike's bringing it to college football en masse, having Florida sign on was probably important.

I've got an email in to Florida asking about the authenticity of these jerseys, and haven't heard back. Update, January 29: Only Gators' Adam Silverstein has sources confirming that they're real and coming in 2013.

OGGOA has confirmed with a source close to the program and an incoming player that these are indeed the new uniforms for 2013 and are being shown to recruits and players as what they will be wearing next season. The jersey, which features a sweatbox under the numbers similar to what is used on NFL jerseys, is also made of a lighter material that Nike uses in its shoes. There are no changes being made to the pants or helmet at this time.

Update, January 30: Scott Carter, mentioning "Internet reports" that "surfaced Tuesday" and writing that the assertion that Florida is changing uniforms is "somewhat misleading," confirms at GatorZone that Florida will wear these new uniforms in 2013, and adds a couple of better pictures of them.

There are two notable differences in the new Florida jerseys from Nike:

--The fonts for the numbers have changed to reflect the font used in UF's official athletics brand identity.

--The sides of the jerseys are constructed of a mesh material instead of a solid material, which increases breathability to help reduce heat.

I would argue that nothing in our original report, which couched the possibility that these uniforms were new in my suspicions that they were and the existence of a picture from a Florida recruit on his official visit, was even somewhat misleading. I'd also argue that the best way for Florida to correct "Internet reports" that are deemed "somewhat misleading" is to either respond to correspondence seeking comment as soon as possible, rather than wait and allow a report to spawn an "Internet report" that thousands will read or to promptly publish a report that serves as a corrective, but I just run a blog, so.

But the ultimate judgment is really up to y'all: Do you love them, like them, dislike, or hate them?