Florida vs. Louisville, Theater of Operations: Reviewing what went right against the Cardinals

Not much went the Florida Gators' way last night in the Sugar Bowl against the Louisville Cardinals. But there were a few things and here they are.

Share All sharing options for: Florida vs. Louisville, Theater of Operations: Reviewing what went right against the Cardinals

The Florida Gators matched up with the Louisville Cardinals last night in the Sugar Bowl and got punched in the mouth. The only problem with that was, they didn't punch back.

Or even attempt to.

Before the Gators even knew what hit them, they were down 24 to 3. Sure they "battled" back to make the game seem close, but they were never really in it. The Gators offense had a game very similar to what we've seen all season long. They finished with 175 yards passing and 111 yards rushing.

Okay, maybe we've seen more from the running game throughout the season. But playing from behind that much isn't conducive to running the ball. And the Gators' offense isn't built to come from behind like that. 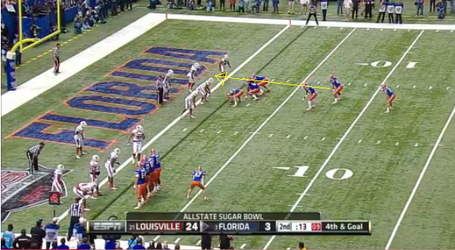 Love the call and I love this formation. Just let Jones do what he does best. 4th down and the game on the line at this point. Also if you look, you'll see that the Gators have the Cardinals outnumbered over the football. Give me the offense every single time in this and I'll gladly take my chances. 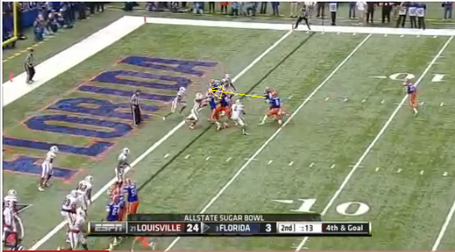 Upon taking the handoff from Trey Burton, Jones has one defender in his way. 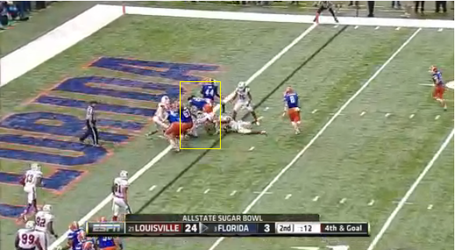 Jones does what he is going to be asked to do a lot in the coming years. He basically runs over the defender and crosses the goal line for the touchdown. Jones is the biggest running back the Gators have, especially when looking at speed and power and the Gators took full advantage of those attributes on this play. 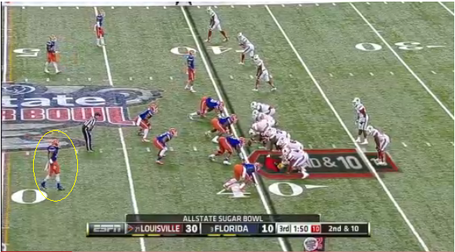 Evans is just going to play in some zone coverage on this play and be in the right place at the right time. 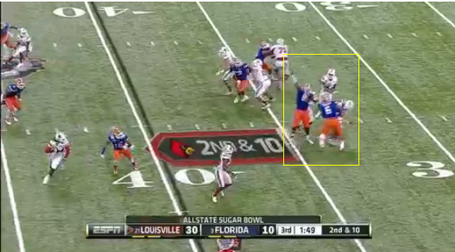 As Teddy Bridgewater attempts to get the ball into the open flat, Dominique Easley gets his hand up and tips the ball up in the air. This is a really good play by Easley, as he does what every defensive lineman should do when they don't get to the quarterback.

Get your hands up! 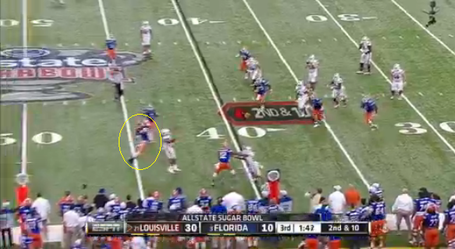 Evans will leap up to match the interception and get seven yards on the return. 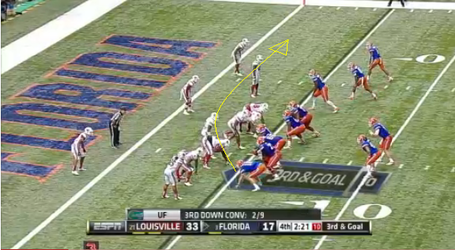 Taylor just comes off the line and will run through the middle of the field to the right and is going to be wide open. The Gators set up three receivers to the right and they are all going to run into the endzone or to the left to clear the space needed on this play.

Best part about this play for the Gators is that a linebacker for the Cardinals didn't follow Taylor as he was supposed to in coverage. 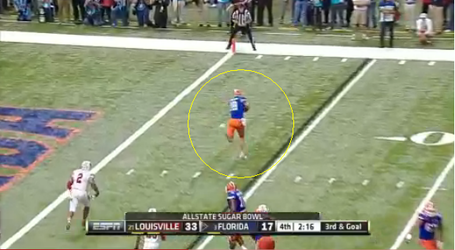 The Gators defense did have five sacks and I guess we could have talked about any of them here, but that's what happens when you fail as a unit: You don't get spotlighted in a good way. But I guess we can mention them.

Matt Elam, Lerentee McCray and Damien Jacobs each had a sack while Sharrif Floyd had two. Easley, while not collecting a sack, did have 3.5 tackles for loss which is a great thing to see as I still don't think he is 100% recovered with his injuries.

Even though the Gators ended the season with a whimper, it was still a great season. 11-2 and a Sugar Bowl appearance is nothing to be ashamed about. Especially after what we all witnessed just one year ago.