Florida vs. Louisville, Theater of Operations: What went so terribly wrong, part one

The Gators lost to Cardinals in the Sugar Bowl the other night. Yeah, that's still all I've got at the moment.

Share All sharing options for: Florida vs. Louisville, Theater of Operations: What went so terribly wrong, part one

Is it fair to throw the blame entirely on the defense?

That's the question that has been running through my head the past couple of days. Ever since the Florida Gators were embarrassed by the Louisville Cardinals in the Sugar Bowl the other night.

The Gators' defense gave up 366 total yards and 26 points. Though they did record an interception and a bunch of sacks, I guess I was expecting more. A lot more.

But no, it was a total team failure. 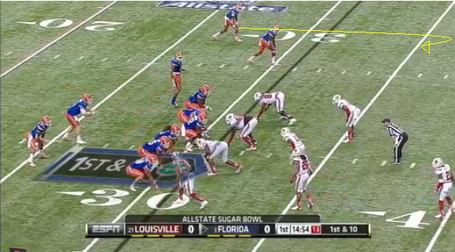 On this timing play, Driskel is going to look for Andre Debose. Yes, I thought the same thing. Debose. Really? 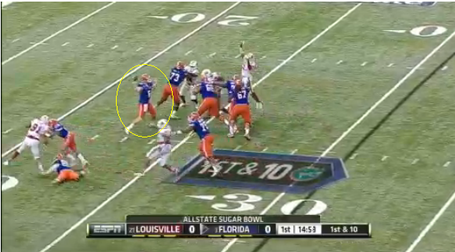 As Driskel prepares to throw, look at the pocket the offensive line provides for him. They actually did a great job blocking on the play, even after the Cardinals send a man in on a blitz. Driskel makes the right call here on the throw, it's just the execution isn't there. 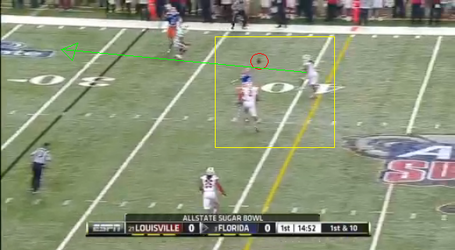 This is one of the reasons why I'm not the biggest fan of throwing the football on your first play in a month. It takes a bit for the timing and accuracy to come back. You can practice all you want, but game-speed is a different beats entirely.

The ball is about two yards too wide, Debose tips it up in the air and it is caught by Terell Floyd who returns it for a touchdown to give the Cardinals an early lead. 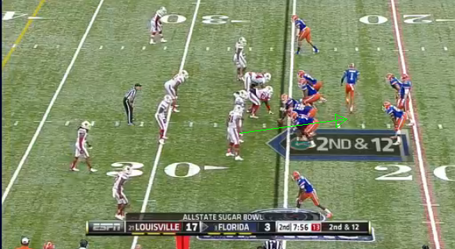 A straight rush by the Cardinals defense. 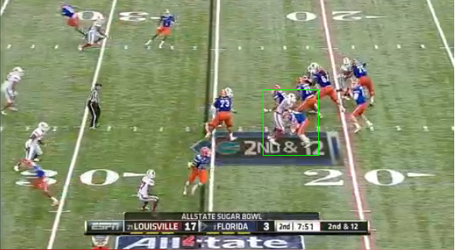 Right after the play action, Hunter Joyer attempts to block the right defensive end. And yes, it goes badly. 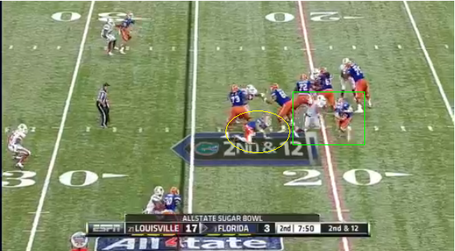 Smith easily gets past Joyer, who ends up on the turf and finds his way to Driskel for the sack. How can six blockers allow four to beat them? And it wasn't just this one play. It was all game long. 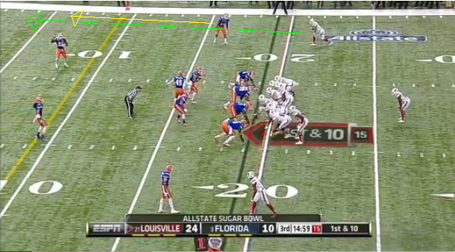 I'm very sure of myself. I have a lot of people who tell me that I'm too cocky. Like, for example, I'm positive that there isn't a person in the entire states of Alabama, Georgia or Tennessee that can beat me in a game of ping-pong. Or Mario Kart on the Nintento 64. Or even in any NCAA college football game of their choosing.

I've played thousands of people in a lot of games (whether video or in life) and I've rarely lost. And I'm not kidding. I rarely lose. Tennis, golf, racquet ball... it doesn't matter what the sport or game is. You might get me in basketball, because that's by far my worst performing sport, but I've never really much cared about playing the game of basketball.

As a result of that, I'm pretty confident in my ability to say that I could cover Copeland on this play at least as good as Jaylen Watkins here. I could at least do what Watkins does. I'm sure of it. 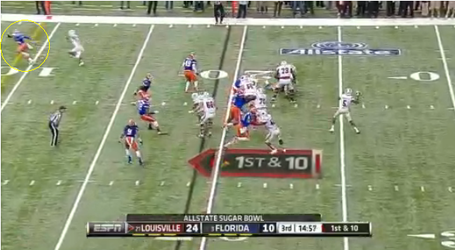 Watkins bites on the inside fake. 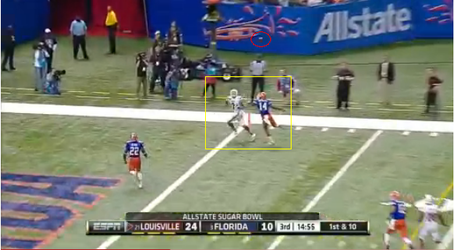 And now he is all sorts of confused as Copeland gets by him for the catch and touchdown.

But the Gators' entire performance was embarrassing, so it's not like Watkins was the only one. A Louisville fan at the gas station last night told me: "Better luck next year." Are you kidding me?! I just smiled, told him to beat Florida State and left.