Florida vs. Louisville, Theater of Operations: What went so terribly wrong, part two

Yes, this is it. The last review of the Gators' 33-23 loss to the Louisville Cardinals in the Sugar Bowl. It's also about time.

Share All sharing options for: Florida vs. Louisville, Theater of Operations: What went so terribly wrong, part two

I'm really getting tired of writing words to just fill up space in this spot.

The Gators lost. We all know that.

It wasn't pretty. It wasn't good. We'll move on. 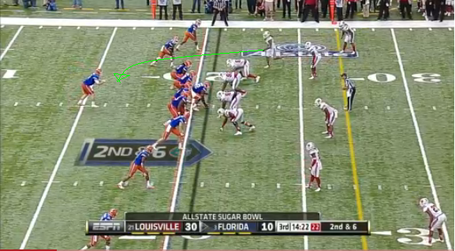 Two things happen here. 1) Driskel doesn't see Calvin Pryor coming on the blitz and 2) Nixon does a horrible job of picking him up. 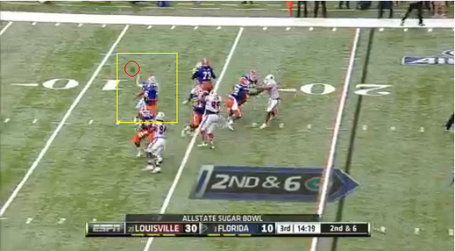 You can clearly see that it is indeed a fumble, but hey, at least the rest of the offensive line is blocking! Baby steps in the right direction. The ball would end up being recovered by the Cardinals at the four yard line.

Play No. 2: Driskel's other interception 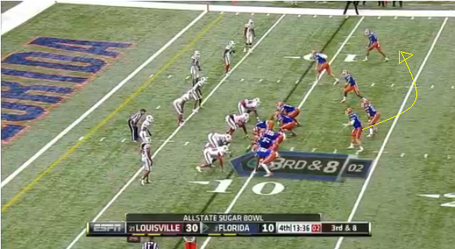 On this play, the Gators send three receivers out to the right and Driskel is going to roll out of the pocket into that direction as well. I'm not the biggest fan of sending the quarterback out like this, because it decreases his options by 50% automatically. Especially on plays like this when there is nothing quick and easy. 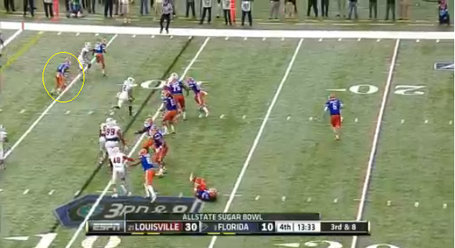 If this ball is to be completed, it needs to be thrown right now at the latest as Quinton Dunbar (circled) is wide open. But Driskel is going to wait too late to throw the ball and to make matters worse, he isn't going to put to the proper touch that is needed. 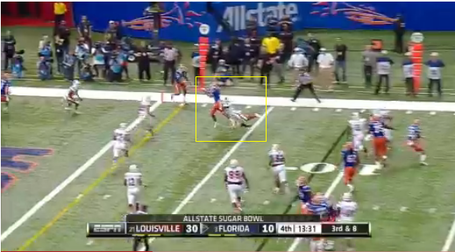 The result is a forced throw, into coverage, that twists Dunbar around. It's also intercepted in the end zone by Andrew Johnson who returns the ball to the twenty-two yard line for a Cardinals first down.

Yes, I know this play doesn't have a dagger moment or isn't big like the others, but it was at this moment that all hope was officially lost and everyone began leaving the stadium and those at home found something else to watch. I stuck it out to the bitter end, but I'll admit that my attention was elsewhere. Like beginning to write the recap. 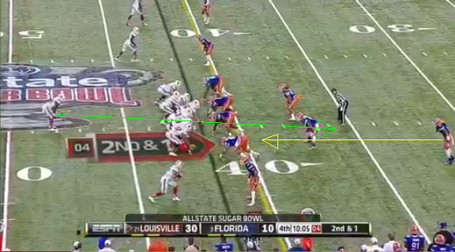 Ahhh, the sad story of Josh 'Wrong Angle' Evans returns. Granted he is coming on a blitz, but once again, he misses the tackle because of the angle he takes at the end. Meanwhile, this is just a simple handoff and a run up the middle that turns into a big gain. 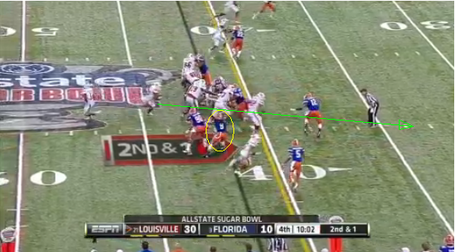 The only Gators defender with a chance to stop this play is Evans. Sigh. 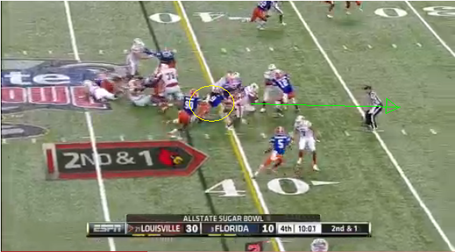 But yes, Theater of Operations was again a pleasure to do throughout the year. And I got to cover a lot more wins compared to last year. We'll be back for the 2013 season, as expected.