Against the Kentucky Wildcats on Saturday, junior quarterback Tyler Murphy continued his rise to stardom since replacing the injured Jeff Driskel. Murphy once again showed the poise and decision-making necessary to be a starter in the SEC.

Murphy ended up completing 15 of 18 passes for 156 yards with a touchdown and an interception. He also added 36 yards and a touchdown on seven carries from the ground, proving that he just might be serviceable as a runner. (Forget, for a moment, that this all came against Kentucky.)

While his interception was bad, we're used to at least one of those a game now, so it's no different. As long as the turnovers continue to drop -- and the Gators' offense as a whole did a great job in cutting out the turnovers against the 'Cats -- the defense should do enough to carry the team.

Murphy's first career home start is this Saturday night against the Arkansas Razorbacks. Hopefully he can take what he learned against Kentucky and apply it to the Razorbacks.

Baby steps, we'll get this. 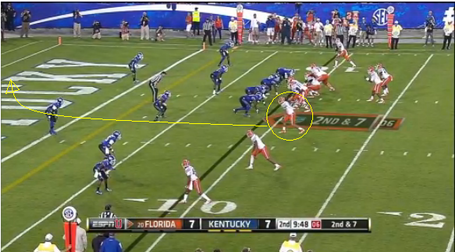 Murphy does a great job identifying the open man on this play. He first looks to his right, then notices Burton before he cuts to the middle of the field and gets separation on his defender. 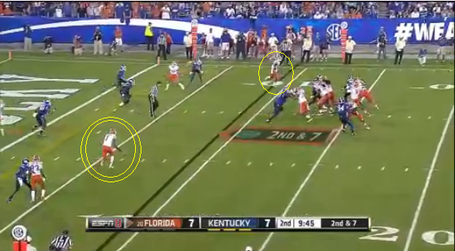 Looking to his right at the beginning of the play wasn't the worst thing, because as he decides to hit Burton over the middle you can see that Matt Jones is open to the right. Also, Quinton Dunbar (double yellow circle) is coming open to the left, but if that throw is made, it's not a guaranteed first down. 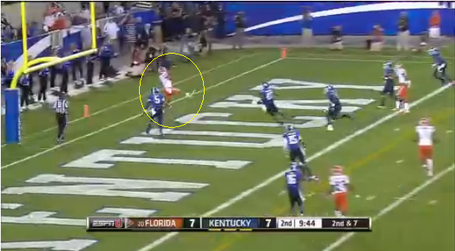 The throw to Burton is slightly high, because of the forward defenders, but it's still a good throw. Burton would land well within the end zone, even though the pylon closest to him is set up on the wrong back line. 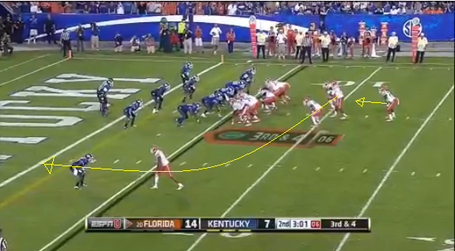 This play will be run out of the zone read from the pistol formation, which the Gators seem to have the players to use extensively. A fake to Matt Jones in the backfield turns into a quarterback keeper, one Murphy will take to the house. 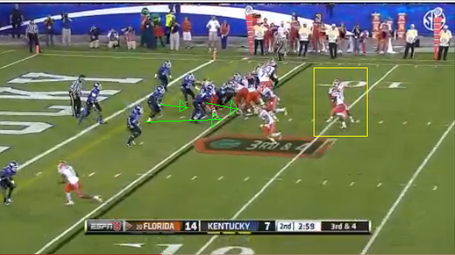 At the moment in which Murphy decides to keep the ball for himself, you can see that there are a couple of defenders free up the middle. The Wildcats' defense was clearly expecting something up the middle, but the play call was excellent in giving Murphy a chance to get the ball to the outside. 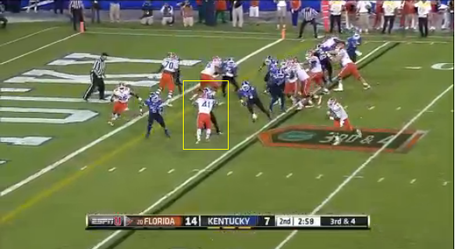 If you're one of the ones who have been focusing on the fullbacks this year, here's Hunter Joyer getting in the key block on the play. 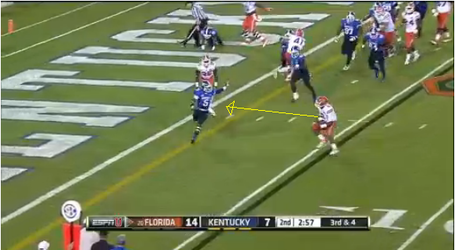 A slight cut to the inside makes this touchdown possible, as Murphy got the defender going to the left when he cuts, leaving him unable to make the change to the inside quickly enough to stop Murphy. 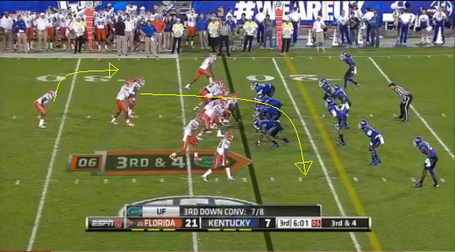 Here's a play in which Murphy's only fault is not identifying exactly where linebacker Josh Forrest is located. Murphy actually does a good job of first looking down the field (over the middle) but ends up making the decision without accounting for Forrest, and it ends up costly for the Gators just outside the red zone.

Also, notice how open Mack Brown gets at the top of the screen. 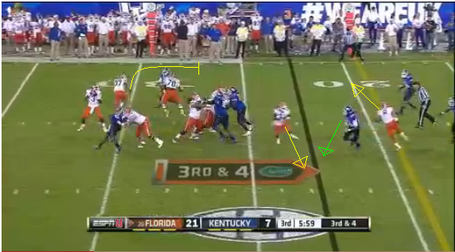 At this point, you can see that Murphy has made his decision and is going to go to Matt Jones. His other two options in the screen are Brown (at the top, the best option) and Burton (over the middle), but he decides on the toughest option. This isn't the worst possible choice he could make in a game, but not seeing the linebacker is. (Editor's note: Will Muschamp said Monday that there was supposed to be a "rub" route run by Trey Burton on this play.)

Had he seen Forrest, Murphy would likely have changed his mind and gone to Brown or Burton -- or, at the very least, put the throw a little further into the route run by Jones.

But if costing the Gators one scoring opportunity in his first game and a half as quarterback for the Gators is the worst thing he'll ever do, I'm okay with that. I wouldn't have even expected that, to be quite honest. 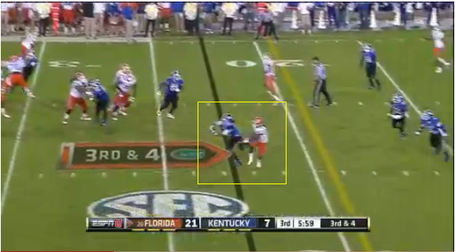 As you can see, the ball is thrown just a little bit behind Jones, which allows Forrest to intercept the ball.

Murphy's first career start couldn't have gone any better given the situation. Playing on the road in the SEC, against Kentucky or not, is tough. We'll see how he responds to his first career home start very soon.

But after that, danger lurks in a big way. Here's to Murphy continuing to make progress and building confidence, because the games get a lot tougher very soon.