Zach Mettenberger is one of the most improved quarterbacks in the country. His improvement and LSU's passing game, which ranks 27th in the country, are intertwined in LSU's success this year.

Whether you consider the LSU Tigers a rival or not (which is a discussion we've had on here a lot and I do not think they are a rival by the definition), it's always a big game and this Saturday is no different. The Florida Gators and Tigers will kickoff at 3:30 p.m. Eastern on CBS. (It isn't a night game, so that's a win right out of the gate.)

Remember last year, when Zach Mettenberger couldn't throw the ball more than 10 yards? I do. Because that was last year. It was hilarious. It was like watching a tape of Jeff Driskel's or Tim Tebow's worst throws for three hours.

Now, Mettenberger has made a Peyton Manning turnaround. By no means am I saying that he's like Peyton: I'm just saying that compared to how he was last year, it's a remarkable improvement. Night and day.

LSU's passing game is ranked 27th in the country this year, and is one of the better passing attacks the Gators will face this year. But, hey, it's cool. We've got the best (I don't care about the stats) secondary in the entire country. Our bread and butter is stopping the pass.

And LSU doesn't have the running game to counter that.

Heck, LSU barely has a defense this year. They're 52nd nationally in points against, though that's what playing UAB, Kent State and Georgia will do to you. (I'll let you think on that.) 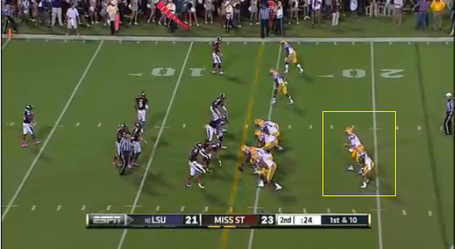 You can't quite see Beckham in the picture yet (he's at the bottom of the formation). But he's one-on-one against the defender and he's going to run a fade into the endzone. As you will see, it's not the best throw, but Beckham makes a great adjustment on the ball. 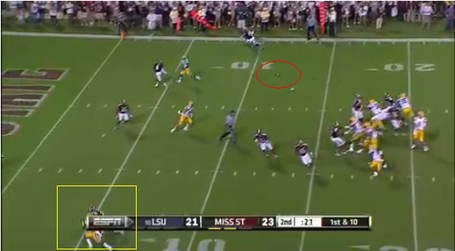 As the ball is in the air, you can see that it's not bad coverage by the defender. He's got inside position on the play and will stay with Beckham the entire way. 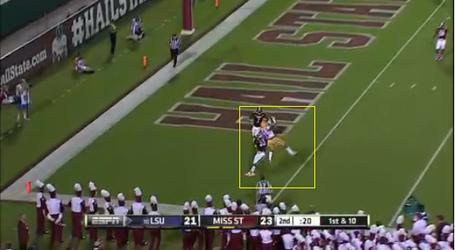 It's a good throw by Mettenberger, in the sense that he put it where only his receiver can get it, but it is a bad throw in the sense that it's underthrown a bit. But it works, because Beckham makes a great play on the ball by stopping, turning around, and squaring his shoulders before attempting the catch.

Beckham even catches the ball at the highest point. Against the Gators' defenders, that's somewhat unlikely to happen. 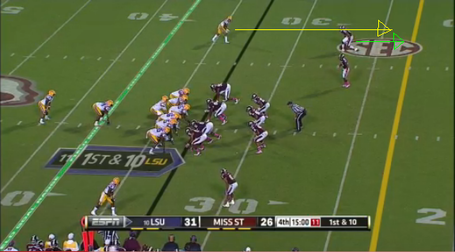 Part of Mettenberger's improvement this year is thanks to Beckham. He's turning into a very legit No. 1 college receiver in a way that the Gators used to have over the years.

Beckham can even make people miss. 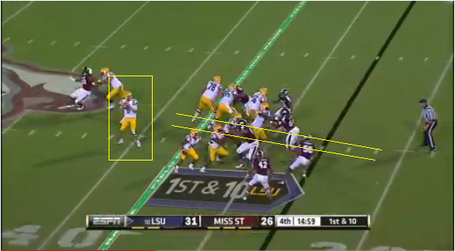 Before we get back to all that, look how Mettenberger looks the defender off of Beckham, who is again out of the picture, this time at the top. Mettenberger quickly looks to the right, and then takes a long look over the middle of the field. 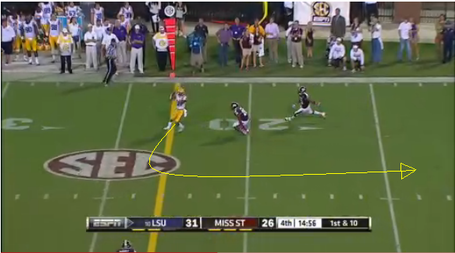 Once Beckham catches the ball, he quickly turns up field, escapes the defenders, and outruns the entire defense for six points. He's dangerous in space. 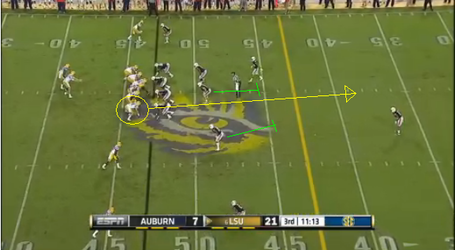 Mettenberger does a great job of using his tight end here, but I don't think he was going to go anywhere else. The second his foot touches down after his third step, the ball is practically in the air. 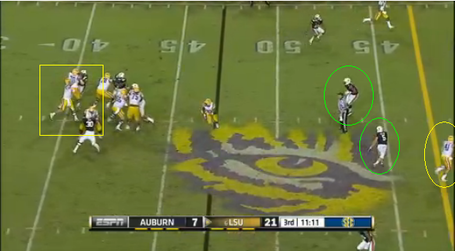 When the ball is thrown, you can see that Dickson is already behind the linebackers and cornerbacks. 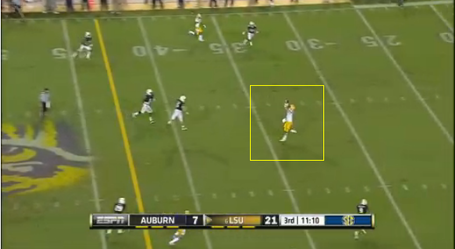 This is a perfectly thrown ball over the defenders and into space. Dickson will turn up field and head for the endzone.

Sometimes, this type of throw is one of the hardest to complete, because the receiver's just so wide open. Just lofting the ball and sending him on his way is usually the way to go.

While I think the Gators match up well with the Tigers here, the game will probably end up closer than the experts think. Last I saw, that line was around a touchdown. I'll say it's a field goal difference either way.