Share All sharing options for: Florida vs. LSU, Theater of Operations: Gators defense suffers letdown in loss to LSU

I guess you could say giving up 17 points in college football these days would count as a successful day at the office for the defense. For the Florida Gators yesterday, it wasn't the total points that made it unsuccessful, but rather how they allowed the LSU Tigers to score those 17 points.

There were bad penalties that kept drives alive and led directly to both LSU touchdowns, and there was terrible run stoppage that may or may not have cost the Gators a timeout or two. It just went on and on.

The first touchdown given up was a tough break, because after two very nice stops on the goal line the field was flipped due to the start of the second quarter. That break cost the Gators any momentum and is tough luck, but such is football. On the other hand, though, the Tigers' offense probably shouldn't have even been there in the first place.

Losing Dominique Easley hurts a lot and other players need to step up. At times, they have.

But Saturday wasn't one of those times. 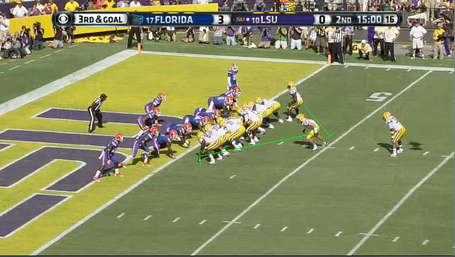 Even though this play was the first play of a new quarter and the Gators lost some momentum because of that, I'm still kinda of disappointed in this play after watching it a few times.

This is right before the snap before the LSU offense gets set. Where are the adjustments by the defense after the players on offense reorganize themselves? I get that you still have to protect the outside in case of a pitch out wide, but still. You'll see what I'm talking about in the next screen capture. 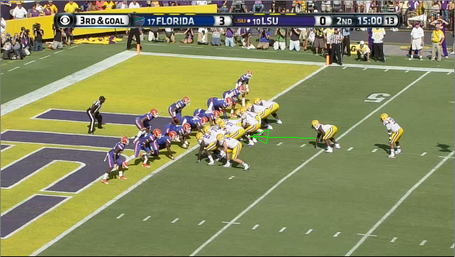 That's the same defensive alignment, even though LSU adjusted their formation on offense. How is that possible? At the very least, you should be throwing someone else real close to the line in the middle, right?

Even though LSU would get away with a false start on the play by the right guard, the play is run to the left. 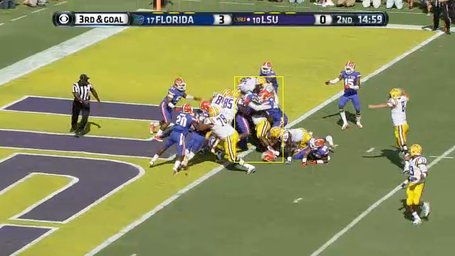 Did Copeland get in? Sure. But hey that's cool as well. Let's all try to make the tackle standing up! 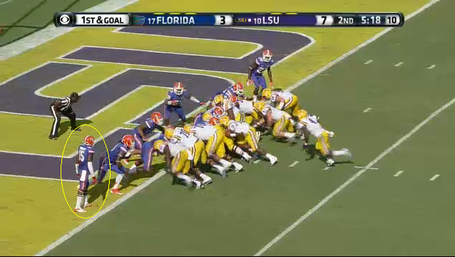 On LSU's second rushing touchdown, it was much of the same thing. I'd like to point out Loucheiz Purifoy, a player who I've defended throughout this year. I am on the verge of being proven wrong. On this play ,for example, I would have liked to see him give a damn.

I guess he was tired just after the snap. 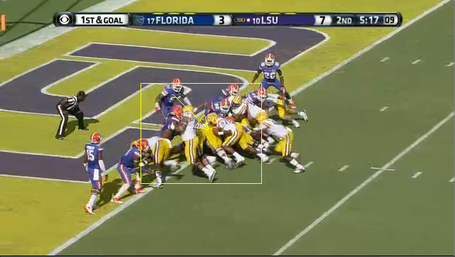 What's that you see? Oh that's just Purifoy still not caring on the play. 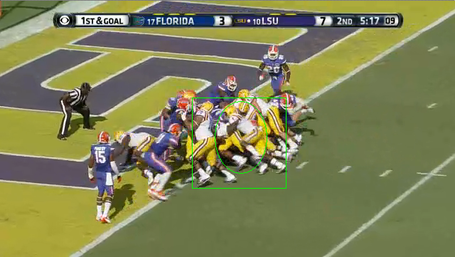 Despite Purifoy not giving a shit at all on the play, the rest of the defense holds up rather nicely until a push from behind gets Jennings over the line for a touchdown. 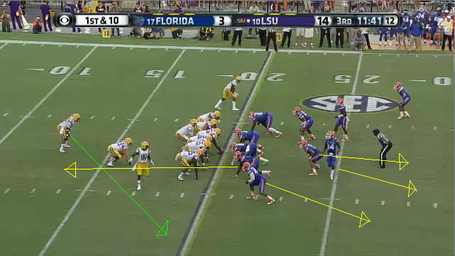 This play hurt. Not because it resulted in points, or was the play that put the game away, but it showed that this defense just didn't have it today. Big plays happen, everyone knows that. But this game just felt weird, and this play sealed it for me.

A Gators defense of the last two years leaving the running back wide open, with nobody even within 15 yards? That's unheard of. 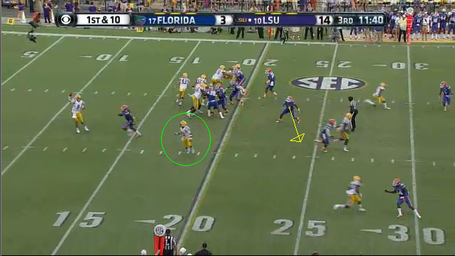 A good rush on the play by Ronald Powell, but that was by offensive design. The help by Antonio Morrison is late in arriving over the middle to cut Hill off. 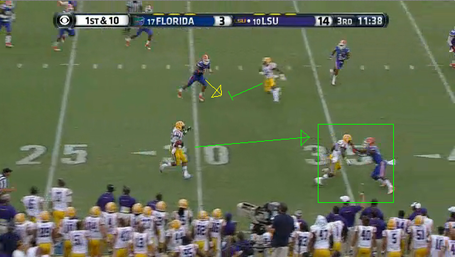 Good blocks down the field, a hurdle by Hill, and all that adds up to a big game. Moving on!

When the dust settled, the Gators' defense had given up 327 yards, including 175 of them on the ground. But on a good note, the defense did keep their streak of creating a turnover alive! I believe it's at 16 or 17 games in a row now. (Ed.'s note: It's 17 games. The last Florida game without a gained turnover was against Texas A&M last year.)

We'll get to the offensive line and their offensive play tomorrow, have no fear. We'll probably get to a couple of good plays by the Gators, too. Y'all ever seen a video breakdown of a field goal? It might not get that boring, but there could be a great pass by a punter and a great punt by a quarterback under the scope.