Florida vs. Missouri, Theater of Operations: Previewing the Tigers' offense without James Franklin

Theater of Operations begins (and ends, really) its Missouri Tigers look by looking at what to expect from the Tigers' offense without injured starting quarterback James Franklin.

Share All sharing options for: Florida vs. Missouri, Theater of Operations: Previewing the Tigers' offense without James Franklin

When James Franklin went down for the Missouri Tigers everyone thought their season would be over. But then true-freshman Maty Mauk entered the picture and the Tigers hung on to beat the mighty Georgia Bulldogs.

Now, nobody knows what to expect from Missouri.

While Mauk has only attempted six passes in his career and has yet to throw a touchdown (or an interception for that matter), most everyone expects Missouri to be okay while Franklin recovers. One thing is for sure though, nobody expects Mauk to be the type of running quarterback that Franklin is.

How will the Missouri offense cope?

The safe bet is that they'll lean on running backs Russell Hansbrough, Henry Jorsey and Marcus Murphy. That trio has accounted for over 1,000 yards and 15 touchdowns. Their top three receiving targets are Dorial Green-Beckham, Marcus Lucas and L'Damian Washington.

Washington is probably the go-to receiver but Green-Beckham and Lucas aren't slouches by any means. The trio have combined for so many yards and touchdowns that at this pace that it would take the Florida Gators' receivers about thirty games to match their totals. 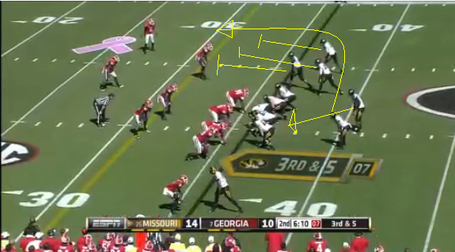 Missouri's read option is one heck of an attack. Will it still be without Franklin? We'll see. But hey, at least they run their offensive plays to the strong side. Had this been the Gators on offense this play would have been to the short/weak side. No doubt about it. 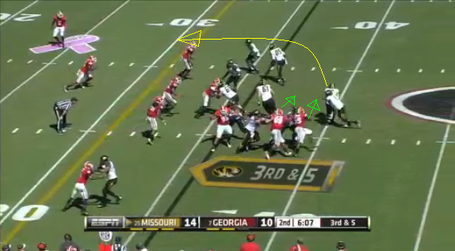 As the Georgia defense breaks through on the left, Franklin gives up the ball. Murphy will take it to the right and he's got blockers. 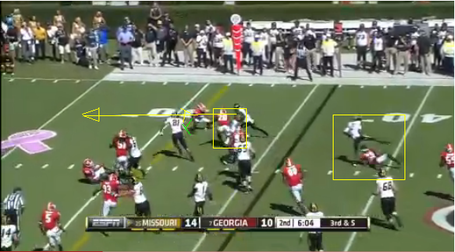 Murphy picks up some key blocks (yellow squares) and another one is on the way. Georgia would miss some tackles down the field, but Murphy makes an impressive run to the endzone. 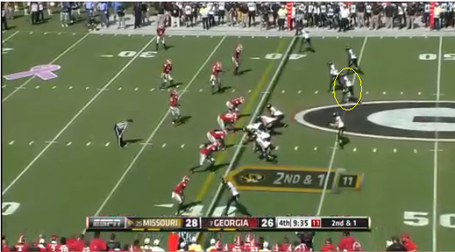 Missouri's lead in this game had dwindled to two at this point and as a result the Tigers bring out the wide receiver pass. Sasser is just going to take a few steps to his right, catch the ball and then chuck it down the field into one-on-one coverage. 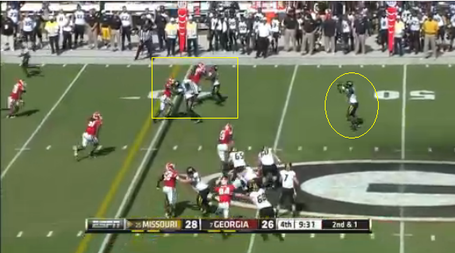 As Sasser gets the ball, you'll see that he's got blockers in front of him so that he'll have time to set up and throw. A nearly 50-yard toss by a receiver, now that's impressive. 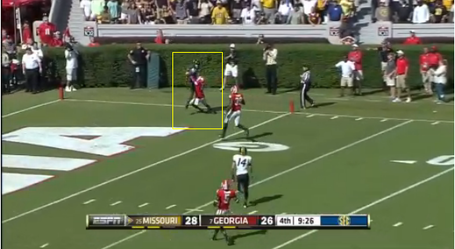 With the Georgia defender on him like a cape, Washington makes the catch for the touchdown. 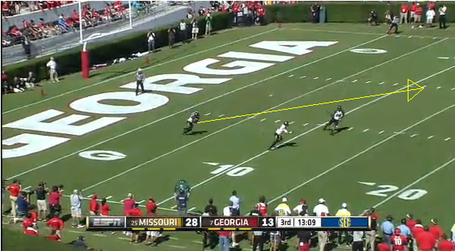 Missouri's also got a strong special teams unit. Here, Murphy is going to do a great job of finding the weak area and attacking it. 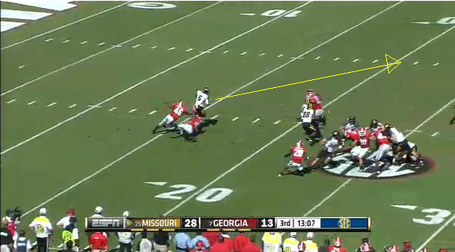 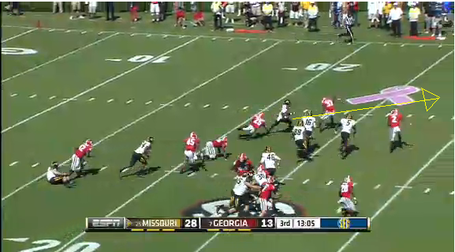 Once Murphy reaches this part of his return he's pretty much off to the races. He'll get caught about twenty yards down the field because he's going to cut to his left, but it's still a very nice return.

I've gone back and forth on this game for the past few days. Not whether the Gators win or lose, but by how much they win by. Without Franklin I think that Missouri struggles a little bit on offense. I thought before all the injuries that the Gators would win by two touchdowns.